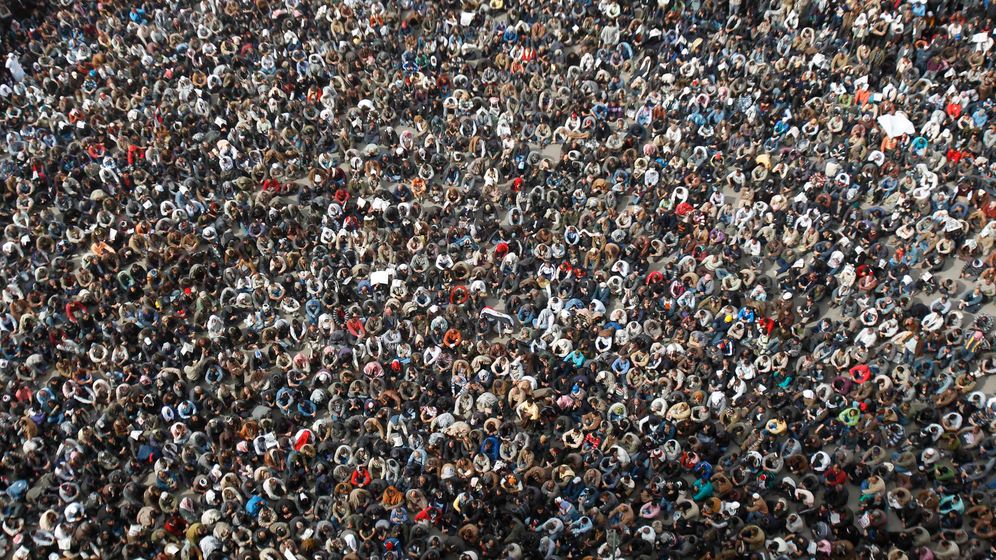 Photo Gallery: The Calm Before the Storm

The bloody clashes in Cairo show that not all of Egypt's 80 million people want to see President Hosni Mubarak overthrown or a new start heralded by fresh elections. Many are fiercely loyal to the ruling system and are ready to fight for it -- with brutality. On Thursday afternoon, there were even reports on the Al Jazeera news channel that Mubarak supporters were storming the hotels of Cairo and hunting down journalists.

The confrontation between the opponents and supporters of the Mubarak regime first escalated on Wednesday, as both sides engaged in hours-long battles on Cairo's central Tahrir Square and the adjoining side streets. Mubarak loyalists stormed the crowd armed with knives, clubs and stones. Some even rode horses and camels, hitting the demonstrators on the head from above with iron bars.

In Cairo's working-class district, they organized a big demonstration, including a motorcade of cars and motorbikes. They shouted slogans such as "Mubarak, we kneel before you," and "Yes to the president of peace." Taking part were members of trade unions and associations, as well as employees of state-run companies, who were obviously told by their bosses to attend.

In the background, the movement is being controlled by businessmen with lucrative state contracts, public servants, security officers and party officials, all of whom are worried by the uncertainty of recent days. They are all determined to ensure that as little as possible changes, regardless of who follows Mubarak. They are the supporters and representatives of the ruling National Democratic Party, which has 3 million members, who fear that they could lose power in free elections. They are members of the nouveau riche, who have gained huge fortunes and influence, largely through corruption and criminality, and who currently enjoy immunity.

The Poor Are Easy Prey

These individuals have everything to lose -- and are now depending on those who have nothing left to lose. The privileged members of the regime don't want to get their hands dirty. Instead, they recruit their helpers from the rural and semi-rural regions, particularly from two provinces north of Cairo: Bahtim and Qalyub. The poor, who make up the majority of the population here, are easy prey. Many are distrustful of the demonstrators' motives and fear that the movement is secretly pursuing other aims.

In every province, there are party offices. There, people -- and especially seasonal workers -- are assembled and offered a tiny sum of money to take part in the bloody battle to keep Mubarak in power. There is not much work on the land at this time of year. Terribly poor and illiterate, they set off to do their employers' bidding for a paltry sum equivalent to around €10-€15 ($14-$20). They are cheap, they are desperate, and they don't ask questions. Thousands have taken part, though it is difficult to estimate the exact figure. According to eyewitnesses, around 4,000 people took part in the counter-demonstrations in Cairo and Alexandria on Wednesday.

Mubarak loyalists have resorted to perfidious measures to sabotage the protests by the opponents of the regime and to put on a show for international observers. Thousands of prisons, including detention centers in the desert, were opened in recent days. At total of 14,000 inmates, including murderers and other serious criminals, were suddenly set free. They were released on the understanding that they would cause as much chaos as possible -- effectively a license to plunder, murder and commit arson.

Between 4,000 and 5,000 of the inmates are thought to have now reached Cairo, while a few hundred have turned themselves in voluntarily. Many want to flee across Sinai to the Gaza Strip in the hope that the radical Islamist group Hamas, which is in government there, will take them in. Hamas has so far not taken a position on the events in Egypt. However, it is assumed that they are not exactly sympathetic to Mubarak because he has supported the Israeli-imposed blockade of the Gaza Strip. Hamas is also considered an ally of the Muslim Brotherhood, a group officially banned in Egypt.

The opposition wants to demonstrate once again against the elderly Egyptian president on Friday. The planned march will converge on Cairo. And the members of the pro-Mubarak camp will also presumably be out in force -- with bloody consequences.

Annett Meiritz contributed to this report.

15 Bilder Photo Gallery: The Calm Before the Storm