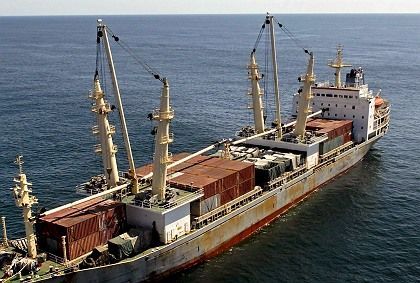 The An Yue Jiang is looking for a port to unload its cargo of Chinese weapons bound for Zimbabwe.

In Durban, South Africa, last Friday, the captain of the Chinese cargo ship the "An Yue Jiang" hastily hoisted anchor. A High Court order had just barred the ship's 70 tons of weapons and ammunition meant for Zimbabwe's dictator, Robert Mugabe, from being transported across South Africa.

But Captain Sanaijun was even more afraid of something else: Germany's state development bank, KfW. It seems the High Court had issued another order to seize the cargo, spurred by a complaint from KfW.

The news had barely broken that the ship had docked when the bank secured a confiscation order for the goods. "At the time," KfW spokesman Michael Helbig said to SPIEGEL ONLINE, "the nature of the cargo was not precisely known." He insisted that "at no time and under no circumstances" would the bank have accepted weapons to enforce the repayment of loans to the Zimbabwean government.

The development bank had approved millions of dollars in loans to the Zimbabwean state-owned Iron & Steel Company in 1998, to set up a new steelworks, and again in 2000 to increase the stock. Helbig said the Zimbabwean government had guaranteed the loans.

South African media reported that the loans amounted to €40 million -- a sum the KfW did not want to confirm or deny. But the loan was never repaid. The Zimbabwean government was thus liable to repay it -- but the state was in no financial position to pay up for its ailing steel company. So in 2006, the KfW secured a ruling from the International Chamber of Commerce allowing it to seize Zimbabwean government assets abroad.

On Friday, though, before the cargo could be seized, the Chinese ship slipped out of port. Since then Captain Sanaijun has been on the run and his ship has been at large. Trade unions around the world have mobilized to prevent his cargo from being unloaded anywhere.

The movement against the An Yue Jiang has been led by the dockworkers and by South African Archbishop Rubin Phillip, who won the first court order to ban transportation of the ship's cargo. Both Phillip and the workers say the weapons will be used by Zimbabwean dictator Robert Mugabe to repress his opponents after a disputed election at the end of March.

"Our objective is to mobilize and organize unions in Africa to take a firm stand and try to stop the ship from offloading these dangerous weapons which could be used to kill Zimbabweans," Sprite Zungu of the International Transport Worker's Federation (ITF) said on Monday, adding that he would travel to any country the ship was planning to dock to mobilize workers not to offload the cargo.

It is not just ITF workers who have organized against Mugabe. The 300,000-strong South African Transport and Allied Workers Union (SATAWU) has also called on transport workers around the world to join their boycott of the Chinese ship. Now the An Yue Jiang has become a sort of ghost ship, drifting somewhere between the Indian and Atlantic Ocean -- although late reports suggest that the Chinese transport company may just order the vessel home.

China has objected that the shipment was nothing more than "perfectly normal trade." Mugabe's political opponent in Zimbabwe, Morgan Tsvangirai, told Germany's Deutschlandfunk radio, "I have nothing against the Chinese, but I do have something against the way they are arming the regime in Zimbabwe with war weapons with which our people will be repressed."

But the ship's whereabouts are uncertain. The Cape Times said that Lloyd's Maritime Intelligence Unit, the world's biggest maritime database, had reported the An Yue Jiang as a "casualty," claiming it had sunk off the coast of East Africa at 11 a.m. on Sunday morning.

This was quickly denied. A spokeswoman for the South African Maritime Rescue Coordinating Centre, Sarene Kloren, said South African naval intelligence had located the ship near Cape St. Francis around 5 p.m. on Sunday evening. There had been no distress calls "between here and the Antarctic," she said.

Defense spokesman Siphiwe Dlamini said the ship was being tracked by the navy: "We are keeping an eye on it." As soon as it strays into South African territory the captain can expect his ship to be seized -- because of the KfW confiscation order. 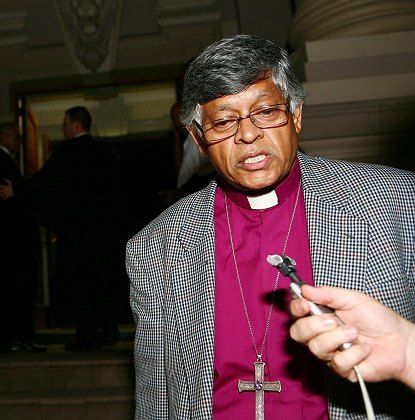 Anglican Archbshop Rubin Phillips successfully applied for a court order to prevent the controversial cargo from being transported across South Africa.

Now it's anyone's guess where Captain Sanaijun will steer his ship. At first he may have wanted to dock in a port in Mozambique. However, the country's transport minister Paulo Zucula did not want the controversial cargo anywhere near his country. "We know that it registered its next destination as Luanda (in Angola) because here we wouldn't allow it into Mozambican waters without prior arrangements," he told Reuters.

So Angola, on the west coast, may be the next destination. But it isn't clear that the An Yue Jiang can sail that far. It took on no extra fuel in Durban, for one thing, and the director in charge of the Institute of Angolan Ports, Filomeno Mendonca, has said the ship "is not authorized to enter Angolan ports" -- and had not even sought a request.

Mugabe Running Out of Munitions?

Even if Captain Sunaijun does offload the weapons in Luanda, there is no common border between Angola and Zimbabwe, so the container would have to be transported across Namibia or Zambia. None of Zimbabwe's neighbors wants to get their hands dirty in such a deal -- particularly after the African Union lost patience with Mugabe at a conference in Ghana on Sunday and demanded the immediate publication of the March 29 election results.

On Monday Zambia's President Levy Mwanawasa urged regional states to bar the Chinese ship from entering their waters, saying the shipment could deepen Zimbabwe's election crisis. On Tuesday, the Associated Press reported that the US government has leaned on African governments to block the Chinese ship from unloading its cargo.

South African media report that the military, police, secret service and even Mugabe's bodyguards need new munitions and weapons. Many other deliveries were cancelled after the state bank failed to pay its bills.

On Sunday, Zimbabwean generals held a crisis meeting to discuss the Chinese delivery. They pondered a route through Tanzania, in East Africa, but when Mugabe's people made inquiries, they were rebuffed.

Still, Deputy Information Minister Bright Matonga is defiant. "If they are for Zimbabwe, they will definitely come to Zimbabwe," he told South Africa's SAFM radio. "How they are used, when they are going to be used, is none of anybody's business."

With material from Reuters.