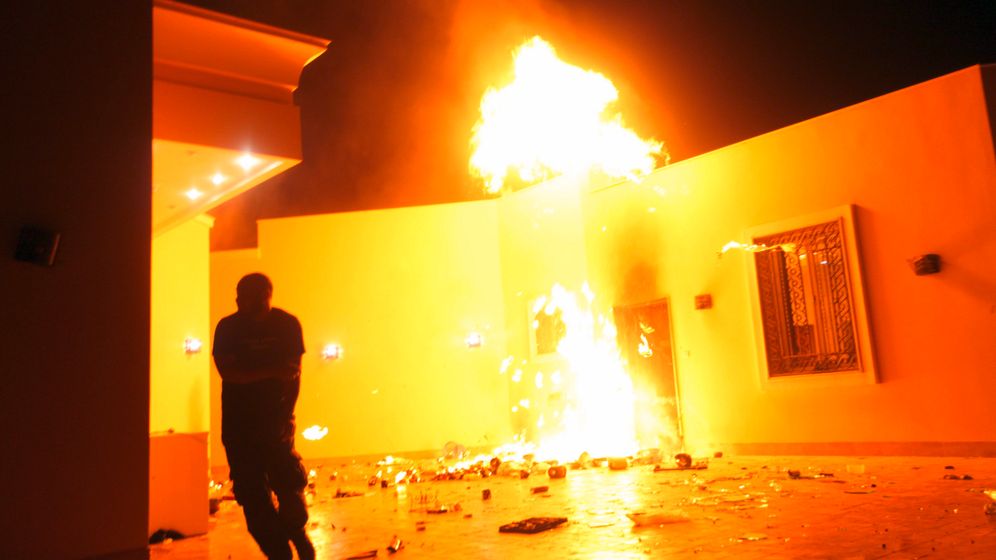 Osama Bin Laden would have been beside himself with joy. On Sept. 11, 2012, the 11th anniversary of the attacks on the World Trade Center and the Pentagon, the black flag of al-Qaida suddenly flew above the grounds of the American Embassy in Cairo, Egypt.

Shortly afterward, militant Islamists also stormed the US Consulate in the Libyan port city of Benghazi, firing machine guns and anti-tank missiles, and lobbing home-made explosives at the building. The attackers killed Ambassador Christopher Stevens and at least three other American citizens.

Nearly 2,000 Islamists gathered in front of the American Embassy compound in Cairo's Garden City district on Tuesday. A dozen people later climbed over the walls and onto the embassy grounds, where they pulled down the American flag. In its place, one man hoisted a black flag with the Muslim profession of faith, "There is no god but Allah and Muhammad is his prophet." The crowd then set the American flag on fire, to the cheers of the other demonstrators. Above the sign at the embassy door, they wrote "Bin Laden."

'My Enemy Is the God of Islam'

Once again, Islamist extremists are trying to defend the honor of the Prophet Muhammad through the use of violence. This latest escalation was triggered by a film, excerpts of which have been available on YouTube since last week. Titled "Innocence of Muslims," the movie presents Muhammad as a simple-minded pedophile and sensualist, shown having sex with multiple women, and his followers are portrayed as dumb, bloodthirsty Bedouins. The movie also contests the belief that the Koran was a divine revelation.

The maker of the movie is Sam Bacile, 56, an Israeli Jew now living in California. Bacile says the movie cost $5 million (€4 million) to make and was financed by more than 100 Jewish backers. "Islam is a cancer, period," says the director, a real estate developer. He also says the film has been shown in its entirety only once so far, to a half-empty movie theater in Hollywood.

But since the film started receiving the support of two men hated by many Muslims, Islamists have mobilized. One of Bacile's backers is Morris Sadek, a Coptic Christian from Egypt. Originally a human rights activist who worked on behalf of this Christian minority in his homeland, Sadek's positions have grown increasingly radical in recent years.

For example, Sadek describes Arabic as the "language of the invaders" and campaigns for Egypt to return to the ancient Coptic language. He also advocates the establishment of a Christian parallel government, which would lead an independent Coptic state in Egypt. "My enemy is the god of Islam," he said in an interview last year, while at the same time clarifying that he loves all Muslims and has Muslim friends himself. Sadek's Egyptian citizenship was revoked last year because of his positions and he now lives in the United States.

Rumors Fan the Flames of Anger

Along with Sadek, Evangelical pastor Terry Jones is also publicizing the movie. Notorious for his hatred of Islam, the Florida pastor called last year for the burning of the Koran and ultimately set a copy of the holy book on fire in his church. This action was followed by violent protests in Afghanistan that left seven United Nations workers dead and 76 people injured.

This time, too, Islamist groups have deftly fanned the flames of their followers' anger. In many cases, it was they who circulated and publicized the video over YouTube and other video platforms over the past few days. At the same time, they spread rumors that the government in Washington backed the filmmakers and planned to broadcast the film on American television on the anniversary of the Sept. 11 attacks.

Salafists in Egypt, whose Al-Nour Party, or "Party of Light," emerged as the second strongest force in Egypt's 2011 parliamentary elections for the now dissolved People's Assembly, called for protests. Storming the embassy in Cairo was also a show of force aimed at President Mohammed Morsi, a member of the Muslim Brotherhood who the Salafists find too pro-US. Among the ringleaders of the unrest in Cairo on Tuesday was Mohammed al-Zawahiri, brother of al-Qaida leader Ayman al-Zawahiri. Mohammed al-Zawahiri had been in prison in Egypt since 1999, but was released in March 2011, after Hosni Mubarak's overthrow.

Appalled in Cairo and Tripoli

Egypt's Copts, who began their New Year's celebration on Tuesday, distanced themselves from the film and its supporter Morris Sadek. At the same time as the attack on the embassy, hundreds of Christians demonstrated in Tahrir Square, condemning the film and its makers. But given the unrest occurring just a few kilometers away, their protest received little notice.

Egypt and Libya are appalled at the attacks, with both countries' governments condemning the violence. Cairo fears this will mean the loss of important investments in the country's battered economy. Meanwhile, Tripoli honored slain Ambassador Stevens as a man who was quick to side with the rebellion against Moammar Gadhafi and who played an important role in creating a functioning political system in Libya.

In the US, meanwhile, the images of the embassy being stormed in Cairo and the news of the death of the ambassador in Libya awakened bad memories of the hostage crisis at the American Embassy in Tehran. From 1979 to 1981, shortly after Iran's Islamic Revolution, radical students there held 52 American diplomats captive for 444 days.

That episode was the beginning of the end for Jimmy Carter's presidency; the effect the attacks in Cairo and Benghazi will have on the US presidential election this fall remains to be seen. But the view the United States takes of the upheavals in the Arab world is sure to change. 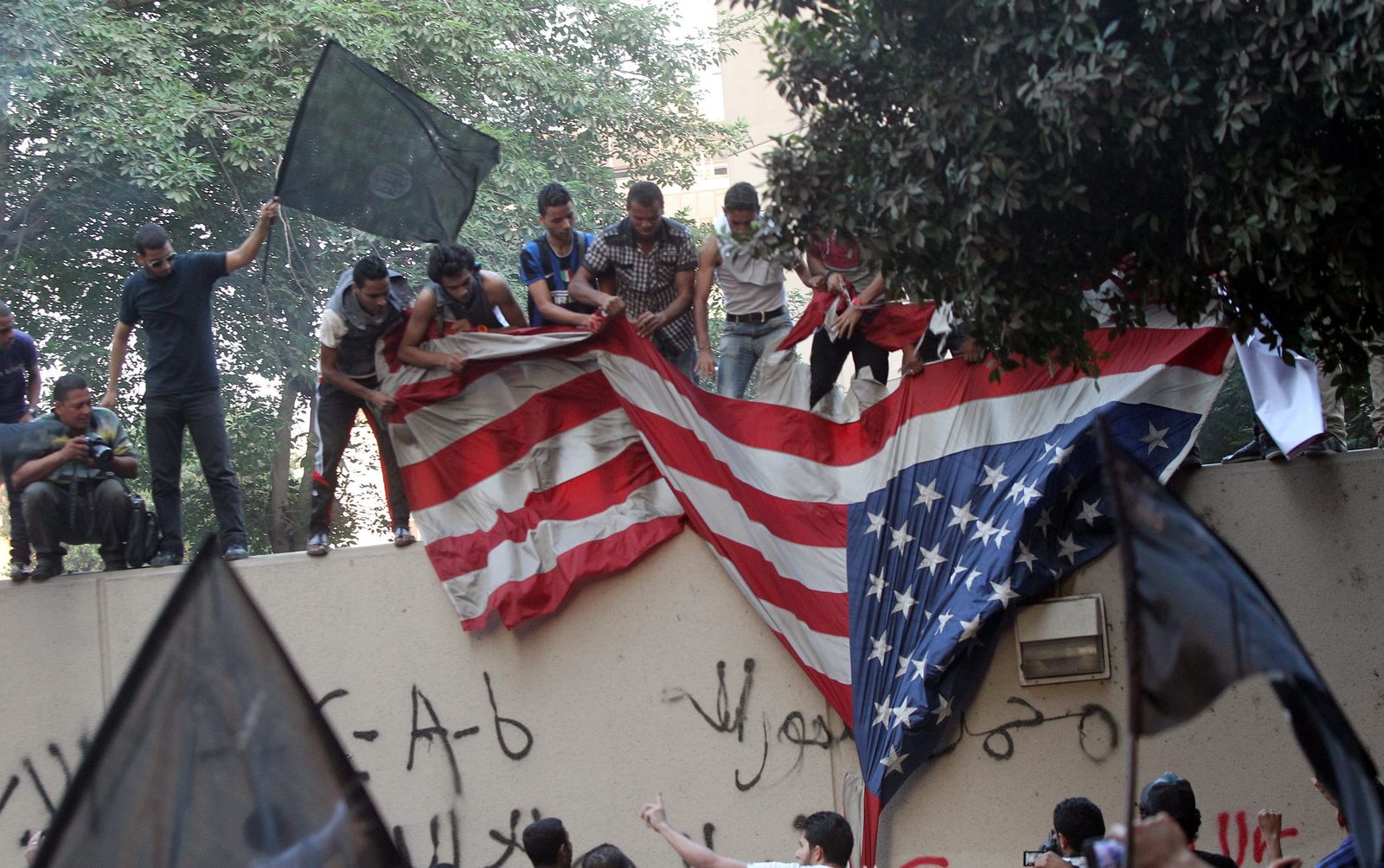 Demonstrators in Cairo also tore down the US flag from the embassy.