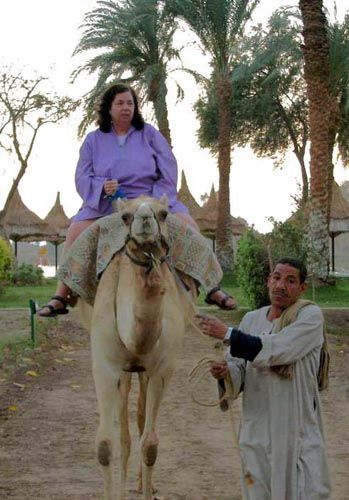 Gillian Gibbons, from Liverpool, has been handed a jail sentence in Sudan.

The British government said it would still pressure Sudan on Friday for the release of Gillian Gibbons, the English teacher who was found guilty of insulting Islam by naming a classroom teddy bear "Muhammad."

Gibbons, a UK national, was sentenced to 15 days in prison plus deportation by a Sudanese court on Thursday. She's been charged with insulting religion but cleared of the more serious charge of inciting hatred and showing contempt for religious beliefs.

The higher charge could have led to a year in jail, a fine and up to 40 lashes with a whip. The prospect of a whipping for the 54-year-old teacher over what her friends and family insist was a cultural misunderstanding has outraged people in Britain and led to increased diplomatic friction between London and the Sudanese government in Khartoum.

Last September, Gibbons asked her 7-year-old students in one of Sudan's most exclusive private schools to decide on a name for a class teddy bear as part of a project on animals. The kids -- mostly children of wealthy Muslim families -- voted overwhelmingly for "Muhammad." Then they were assigned to photograph the bear and write diary entries about it, which Gibbons collected in a workbook called "My Name is Muhammad."

According to the Sudanese government, when some parents saw the book, they complained to authorities that Gibbons had offended Islam by allowing an animal to be named after the Prophet Muhammad. Insulting the Prophet is a crime in northern Sudan, where Khartoum is located.

British Muslim groups spoke out against the trial and sentencing of Gibbons by the Sudanese government, saying officials had overreacted.

"This case should have required only simple common sense to resolve," said Dr. Muhammad Abdul Bari, Secretary-General of the Muslim Council of Britain, according to Reuters. "It is unfortunate that the Sudanese authorities were found wanting in this most basic of qualities."

But Robert Boulos, the head teacher at Unity High School in Khartoum, where Gibbons worked, insisted the lighter verdict -- 15 days in jail, rather than whipping -- was fair.

"We are happy with the verdict," he said. "We will be very sad to lose her."