The Islamists got hold of Mohammed Omar just as he was delivering bandages to a gas station where injured people were being treated. "You're an enemy of God!" they yelled at him.

"There were five men. They beat me and dragged me away," says Omar, a computer expert who lives in Cairo. His face is bruised and his eyes are swollen shut, and his wrists are cut from the plastic cuffs they put on him.

They took him to a sort of room consisting on one side of a gate to the presidential palace, with the other walls made up of steel barriers and police officers. Here members of the Muslim Brotherhood and other Islamist groups interrogated and mistreated their "prisoners."

Mohammed Omar is one of many demonstrators who say they were held by Islamists last Wednesday, in some cases for more than 12 hours. Now, as witnesses are telling their stories of that night, a clear picture is emerging not just of the violence committed by members of the Brotherhood, but also their readiness to mete out arbitrary vigilante justice.

Last Wednesday, supporters and opponents of Egyptian President Mohammed Morsi fought running battles in front of the presidential palace in Cairo's upscale district of Heliopolis. Both sides were extremely violent, beating each other with baseball bats, firing guns and hurling stones and Molotov cocktails. Eight people died. The Muslim Brotherhood said all the dead were from their ranks, but that's probably not entirely true. There is no reliable information, however.

Some 140 people, among them women and minors, were "arrested" -- not by the police, but by the Islamists. "That is an incredible occurrence," says human rights lawyer Ragya Omran, who was at the scene. "They have no right whatsoever to do that."

The Islamists had set up a number of improvised "chambers" around the palace. Mohammed al-Garhi, a journalist for daily newspaper Al-Masry al-Youm, had access to such a chamber located near the Omar-Bin-Abdel-Azis mosque. "At first they didn't want to let me in," he says. But then a friend who works for Misr TV, the Muslim Brotherhood's channel, came by and led Garhi inside.

Bloodiest Night Since The Revolution

"There were around 15 members of the Brotherhood -- big strong guys who looked like bodybuilders. They hit the prisoners with their fists and kicked them and tore their clothes off them," he says. He saw how the Islamists repeatedly brought in young men whom they had picked out of the crowd at random. Their money, telephones and identity papers were confiscated. They were passed on to the police later. "The Muslim Brotherhood members demanded the young men tell them who had paid them, and accused them of being thieves or supporters of the old regime," he says.

Three of the Muslim Brotherhood men appeared to be in charge and were issuing orders. "If the prisoners denied the accusations then the beatings got worse," says Garhi. One of the men begged: "I'm an educated man. I have a car. Do I look like a thief?" Most of the prisoners were too weak to be able to speak. Two of them were unconsciousness and looked to be in life-threatening condition.

"I'd call what happened there torture," says Garhi.

An investigating committee set up by the Justice Ministry issued a statement saying that on this night, the bloodiest since the revolution almost two years ago, 31 people were tortured. Human rights lawyer Ragya Oman insists the total is higher than that. "116 people were badly mistreated," she says.

The Muslim Brotherhood insists on its version of the story. "These people had weapons," says Mahmoud Hussein, general secretary of the Brotherhood. "They attacked us and we only defended ourselves." He admits that some of the people making arrests were members of the Muslim Brotherhood. But he says they immediately handed the men over to the police.

He defended the protests despite the violence. "It is our duty to defend our democratically legitimate president." He said the prisoners were supporters of the old regime and paid troublemakers.

Particularly controversial is the fact that President Morsi also initially championed this version of the story. How much he knew of the Islamists' indiscriminate vigilante justice is not yet clear. However something he said in a statement on national television last Thursday raises questions. Morsi said the detained had admitted to having ties to the political opposition and having been paid to carry out violence. He appeared to be referring to statements forced out of the prisoners by the Islamists.

Shock over Cooperation Between Islamists and Police

"At that time, the logs of the state prosecutor's office had not yet been released," says Ragya Omran. Spokesmen for the Muslim Brotherhood and the government have reassured that Morsi was only referring to the official confessions. "But there weren't any confessions at all, and there wasn't any evidence," Omran says. "Practically all of those who were arrested were released on the next day because they were innocent." She says she finds it scandalous that Morsi publicly and prematurely discredited the prisoners.

"The Interior Ministry did nothing to protect the citizens from the brutality and vigilante justice of the Islamists," Omran says. Garhi, the journalist, also says he was shocked by the cooperation between the Islamists and the police. "They didn't just tolerate the abuse, they also supported them by covering up their torture chambers." A spokesman for the Morsi government has since told The New York Times that there will be an investigation into the incidents.

Since that night, there has been intensified debate on whether the Brotherhood has a militia -- thugs who train in so-called sports clubs. The Muslim Brotherhood disputes that the brutal interrogations were organized in any form.

"There was a hierarchical structure at least," Garhi says. "With the Muslim Brotherhood, everything is organized." However he did sense that the violence itself was spontaneous. "I could see the rage that they fought with, the glow of revenge in their eyes. They were fighting jihad."

On the morning after the fighting, burned cars were still smoking in the side streets by the presidential palace and the stench of burned tires and tear gas lingered in the air. The Muslim Brotherhood was presenting itself as the clear victor of a war. "This here is our area now," said Fatih al-Mahdi. "We have protected our president in a heroic fight, and clearly won."

The trophies of the victory squatted behind Mahdi. In front of a gate of the palace, the Muslim Brotherhood followers had herded together 63 young men like animals. They squinted fearfully in the morning sun with swollen, bruised and bloody faces.

Photos weren't allowed of the brutal scene, which said much about the hate between the political opponents in Egypt's power struggle and about the Muslim Brotherhood's certainty of victory. "They are our prisoners," said Madih, who said he was a lawyer. "Like in war, the Geneva Convention applies to them, and that prohibits photos." 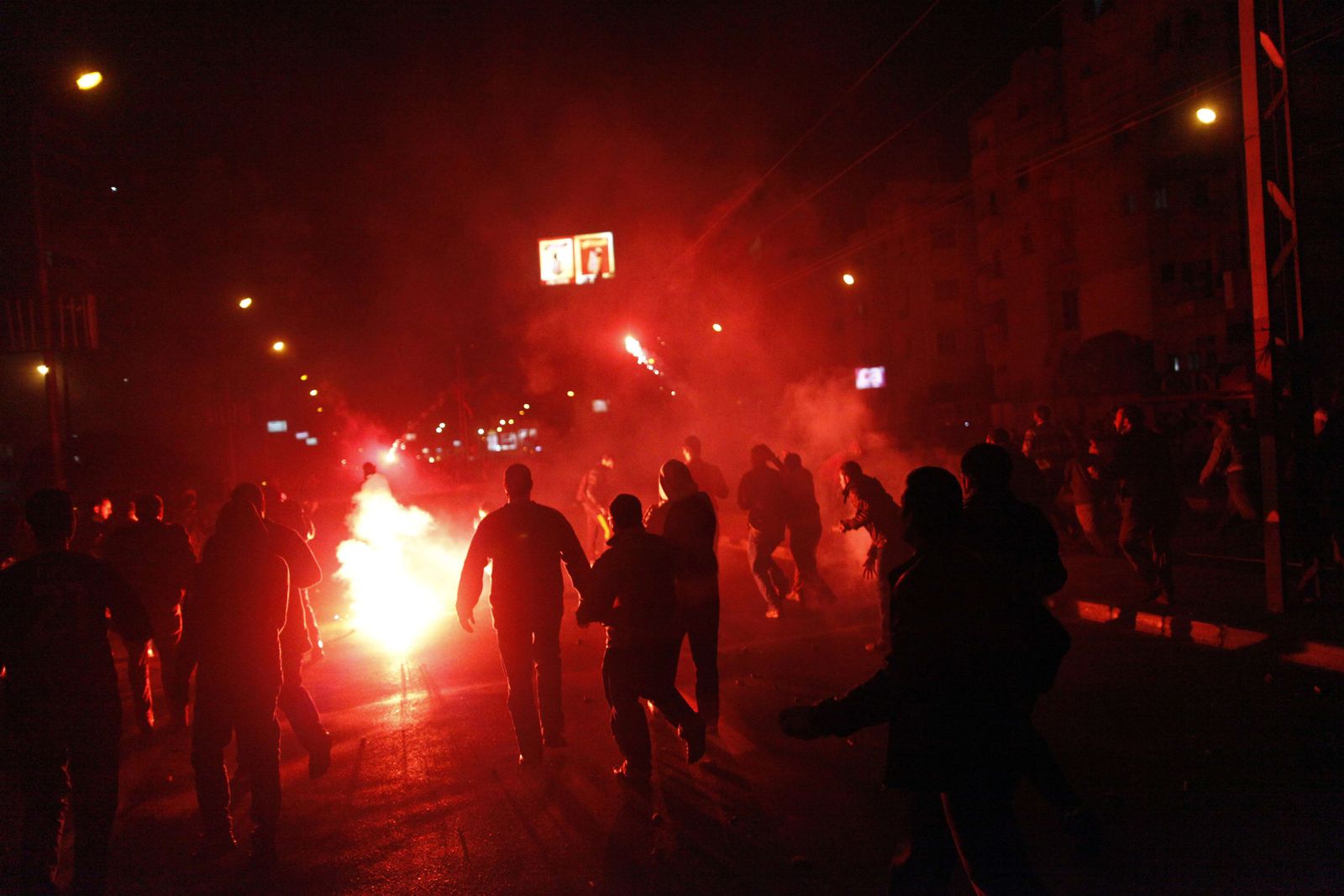 The clashes in Cairo last Wednesday night were the bloodiest since the revolution in 2010.