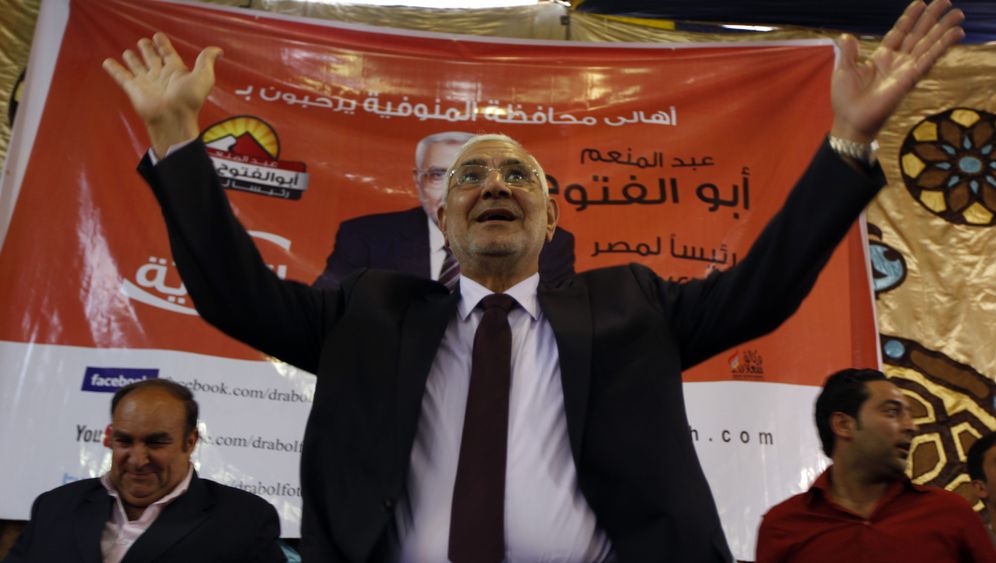 A dredger moves slowly through the glistening, soupy waters of Egypt's Lake Timsah, also known as Crocodile Lake. A Mubarak doll, dressed in faded jeans and with a noose around its neck, hangs at the jetty for the ferry across the Suez Canal.

If it weren't for Hassan al-Banna, there wouldn't be much else to report from Ismailia, a provincial city redolent of eucalyptus, located two hours northeast of Cairo next to Lake Timsah. Banna was a 20-year-old elementary school teacher who came to the city in 1927.

Banna's arrival in Ismailia marked the beginning of a story that has had as much of an impact on Egypt and the world as the famous canal. It is the story of the rise of the Muslim Brotherhood to become the strongest organized force in political Islam, as well as a powerful player in Egypt, where a new president will be elected on May 23 and 24. One of the key issues in the election is the question of what role Islam will play in the future life of the republic.

Candidate Abdel Moneim Aboul Fotouh represents, for the first time, a reasonable chance that a former top member of the Brotherhood could assume one of the most powerful offices in the Arab world. For some it would be the culmination of the revolution, but for more secular skeptics it would mark its end.

'Resistance against the Missionaries'

It all began in Ismailia on the Suez Canal when Banna decided to take Egypt from the modern age back to its roots. He was the founder of the movement.

The West was to blame, say supporters of the Muslim Brotherhood today. "Why Ismailia?" asks Midhat Saki, a minor official with the Muslim Brotherhood in Ismailia who has a dark, crusty prayer bump on his forehead. He goes on to answer his own question. "Because the colonialists walked around here as if the country belonged to them. They allowed thousands to perish during the construction of the canal."

"They drank wine, built churches and brought missionaries into the country," Saki continues. "Sheikh Banna began the resistance against the missionaries."

The Brotherhood has its headquarters next to an auto parts shop. The chairs are still covered with plastic wrap, and the symbol of the Brotherhood, two crossed swords above the Koran, and the words "Prepare Yourselves," hangs in the stairway.

Saki tells the story of Hassan al-Banna, and of how he and six canal workers founded the first cell against evil -- in the form of Western decadence, exploitation and proselytizing -- and for good -- namely Islamic values, charity and justice. With Banna at its helm, the Brotherhood grew, and had more than half a million members by the time that Banna was shot and killed by an assassin in 1949. Saki relates how the Brotherhood built mosques, hospitals and factories, and how it tried to spread "true Islam" from the bottom up, using itself as a model, instead of from the top down, as the revolutionaries would later do in Iran.

"No violence," says Saki, as he toys with a car key. For decades, the Muslim Brotherhood was brutally repressed at the hands of Egyptian regimes under Gamal Abdel Nasser, Anwar Sadat and Hosni Mubarak. He too was beaten, says Saki, when he was in prison.

The Muslim Brotherhood has since become the driving force in the Middle East. It influences politics from Rabat to Damascus, and its growing strength is as feared in Dubai as it is in the Saudi Arabian capital Riyadh and in the suburbs of London and Paris.

The Brotherhood has about 600,000 members in Egypt today. Its political arm, the Freedom and Justice Party (FJP), became the strongest party in the Egyptian parliament last winter. The Brotherhood has a strict hierarchical structure that is unchanged since Banna's days. Its supreme leader is the chairman of its executive board. The members are organized into cells called "families." Each family consists of five Brothers.

The magazine Foreign Affairs recently compared the movement to Scientology, describing it as secretive, with a sect-like power structure and exercising tight control over its members. The Foreign Ministry in Berlin, however, calls it a "major party capable of securing a majority in the long term." German officials in the ministry see the movement as an Islamic version of Bavaria's conservative Christian Social Union (CSU), devout and sometimes radical in its rhetoric, and yet shaped by the middle class and ultimately pragmatic. Both predispositions exist within the Brotherhood -- that of the sect and that of the big tent party.

In June 1947, Banna sent a list of 50 proposals to the leaders of the Islamic world, and the Egyptian king, in particular. The manifesto, "Towards the Light," is one of his few political texts. To this day, his critics cite it as an indication of how little the supposedly moderate character of the Brotherhood has in common with reality. It reads like something the Taliban could have written.

In the text, Banna calls for the reintroduction of corporal punishment, the moral supervision of government officials, and the prohibition of prostitution, gambling, alcohol and "ostentation in dress and loose behavior."

He demands that dance halls be closed and theater and singing performances be subjected to rigorous control and purified of immoral thoughts. Banna's political program also includes gender separation in schools, the encouragement of memorization of the Koran and the reunification of Islamic countries to form a caliphate.

Today, Banna's manifesto is disseminated on Ikhwanweb, the Brotherhood's international website, which states: "Many of the view points and directives it contains still represent the dearest hope of every Arab and every Muslim."

A Better Human Being

"Of course we want the caliphate," says Saki. "All Islamic countries must become one nation, but without violence." He gives the interpreter a serious look. Everything else, he says, including Sharia law and clean living, can only be introduced in the long term, and certainly not by decree. "We must serve as role models, so that others will follow."

Then Saki says something that points directly at the core of the movement: "We want to change people. Without violence! First the individual, then the family and then the world."

He is referring to an educational program that culminates in a better human being, which the Brotherhood calls "Renaissance." It explains why the party wants to occupy key positions in education and culture. For the Brotherhood, this is more important in the long term than gaining control over the police or the judiciary.

And it's precisely what worries some people. At the beginning of the month Adel Imam, a popular Egyptian comedian and actor, was convicted of offending Islam. But the films in question, in which he portrays confused, bearded men with prayer bumps on their foreheads, are more than 10 years old.

'Triviality and Pornography Are Being Broadcast'

"Triviality and pornography are being broadcast in the movie theaters," says Ahmed al-Bahi, the representative of the FJP in Ismailia. "We won't close the theaters here. But we will educate the people so that they can make their own decisions about boycotting things."

That, he believes, is a great concession to tolerance.

Bahi, a pleasant man, is a bridge engineer and speaks fluent English. "The old forces are still in their positions," the engineer says later, as he forces his dilapidated Hyundai through narrow streets. Voters are restless, he says. "We have the political majority in Ismailia, as we do everywhere in the Nile Delta. But we have no governmental power." Not everyone would complain about that fact.

The original mosque of the Brotherhood, which Banna helped to build with his own hands, is a green-and-white building on New Train Station Street. A plaque outside reads: "Dankes Mosque, formerly the Mosque of the Muslim Brothers, built in 1931." The ground floor is rented to a furniture dealer. Lamb halves dangle from hooks in the butcher's shop next door.

The janitor at the mosque is Salim Yahir, who used to work as a pizza chef in the western German city of Aachen. The entire neighborhood voted for the FJP in the parliamentary elections, he says, although he adds that it is hard to predict whom they will vote for in the presidential election. "The Brothers," he says, remembering bits of his German, "are from yesterday. You understand? Now they come and say: We no more smoke and drink." Then he offers the SPIEGEL reporter a cigarette.

Banna may have embarked on his plan to create a new kind of human in Ismailia 84 years ago, but he didn't get very far.

'They Let Us Down'

The Brotherhood had promised political humility before the parliamentary elections in the winter. After their election victory, they tried to take control of the constitutional commission and they eventually put forward a candidate for the presidential election after all, even though that was precisely what they had said they would not do. The movement, says Muslim Brotherhood expert and political scientist Diaa Rashwan, has switched from "patience" to "dominance" mode, out of concern that its voters could feel disappointed and turn their backs on the Brotherhood, because their daily lives have not changed.

An iron desk stands on the sidewalk next to the mosque. Behind it, nibbling on sunflower seeds, is a rotund, melancholy man, the owner of the butcher shop, keeping his eye on the street. Next to him are a toothless man with a packet of sugar on his wrist, sitting on an aluminum chair, and a man with a gloomy, scarred face who looks as if he might have accidentally stuck his head into an exploding oven.

"Hummel, Hummel," the toothless man says, using a colloquial greeting typical of the German city of Hamburg. Tears of emotion well up in the corner of his eyes. He was a sailor and apparently went to sea once with a man from Hamburg. The man with the scarred face embarks on a monologue that the interpreter summarizes as follows: "The Muslim Brothers had their chance. They let us down. We are all Muslims. Germany should help us."

The small group is sitting under a tarp made of an old campaign banner. The melancholy man introduces himself as Ibrahim al-Gaafari, master butcher. Years ago, he was an unsuccessful candidate on an independent list. The banner hanging above him was his own.

"The Brothers are Muslims like us. They're harmless. What can anyone have against them?" asks Gaafari. But the niqab, the full veil, shouldn't become obligatory, he adds, saying: "I wouldn't even recognize my own daughter." There are also deviants among the Brothers, says Gaafari, and they are responsible for all the chaos, the recent attack on a refinery and the secret campaigns. "We voted for the Brothers because we were hungry for freedom. It's as if you suddenly had a plate of rice and meat in front of you. The first thing you do is eat. But they're liars."

The three old men say they will vote for Khaled Ali, the candidate favored by young people, or perhaps Amr Moussa, the charismatic former foreign minister, who Mubarak sidelined to the position of secretary-general of the Arab League. But they certainly will not support a candidate who has anything to do with the Muslim Brotherhood.

And there they sit, in the shade of a campaign banner that depicts the butcher's head and the words: "One of the devoted sons of Ismailia. Support him with love and esteem."

They sit there, and they'll be sitting there again the next day, chewing sunflower seeds. They are living proof of the tenacity of people, who are the way they have always been -- in other words, largely immune to all attempts to reeducate them.