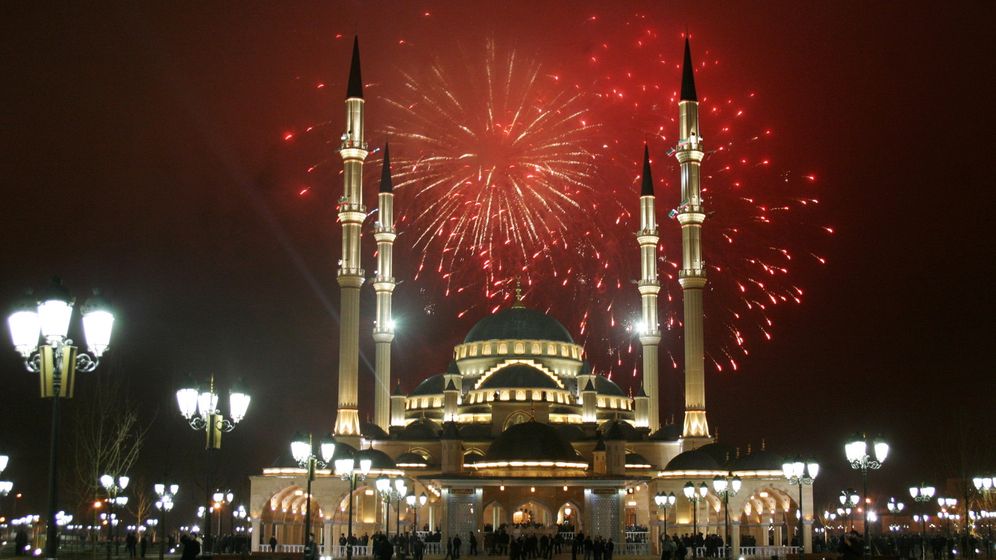 Small trees are supposed to be keeping the Muslims out of Tekstilshchiki, a district in south eastern Moscow. A young man sets to work with his shovel, pushing it into the earth with a determined kick. Then he places a seedling into the hole and sprinkles earth over it. Using her watering can, Maria Sotova pours some water onto the seedling. "We want a park here and not a mosque or a church or anything else," says the mother who is here with her six-year-old son. There are about a hundred residents of Tekstilshchiki gathered on this lawn --and they want to prevent the start of construction on an Islamic religious center.

The Moscow media have already christened this patch of green "the Russian Ground Zero" in a reflection of strife over the mosque being built near Ground Zero, the site where the twin towers of the World Trade Center stood in New York before the terror attack of 9/11. The country's largest online newspaper, gazeta.ru, drew parallels with other European controversies surrounding Islam: The burqa ban in France and the immigration debate now raging in Germany. Europeans are frightened of Islam because the religion's values are utterly foreign to them, the article said. "Now we are experiencing something similar in Moscow and St. Petersburg."

According to estimates by the Moscow council of muftis (equivalent to a council of deacons in the Christian faith), up to 20 million Muslims live in Russia today. Muslims have dominated some parts of the country for centuries. While the predominantly Muslim Republic of Tatarstan in the Volga region is regarded as moderate, guerrillas are fighting to set up an Islamic state in the northern Caucasus. Islamic extremists were behind the suicide bomb attacks that shook the Russian capital this March and killed 40 people.

Up until recently only political non-entities, extreme right wingers and ultra-orthodox Christians were openly Islamophobic. Since state authorities have started cracking down on Russia's far-right scene, the groups involved have begun resorting to more subtle tactics. In Tekstilshchiki, an organization of former neo-Nazis is trying to stir up local sentiment against the mosque by citing arguments that people find easier to relate to than abstract words or ideologies: they claim to be opposing the mosque because they want to protect Moscow's green areas.

The planned mosque would only be the fifth in Moscow, even though this metropolis of 10.5 million has more than 1.5 million Muslim residents. In comparison, Berlin, which has a proportion of Muslims amounting to less than a sixth of Moscow's, has at least six large mosques. That is why the Moscow council of muftis wants more mosques to be built and says Moscow should have up to 40.

Recently a huge crowd of Muslims gathered outside Moscow's largest mosque on Prospekt Mira avenue. Tens of thousands of worshippers were trying to get into their house of prayer to celebrate the end of Ramadan. "You had to know the imam personally to clinch a place in the mosque," Rustem, a student from Uzbekistan, recalls. Like many others, he simply unrolled his prayer carpet on the street in front of the mosque. Others placed theirs in between tram tracks in order to kneel upon them. Cries of " Allahu Akbar," or "God is great", rang through the streets while Moscow drivers were tormented by long detours through the traffic.

The piece of land that the city administrators gave the Muslim community in the south-eastern district of Moscow is almost as big as a football field. It is also the single green spot between massive brick buildings, rusty garages and modern apartment blocks. Mothers come here to push their prams around, and dog owners play fetch with their pets.

It was shortly after the post-Ramadan traffic problems that the citizens of Tekstilshchiki gathered for the first time in this park where the mosque is supposed to be built. The organization Moj Dvor -- which means "My Courtyard" -- called for signatories to a petition against the construction. Around 300 residents turned up. Photos of the crowd worshipping on the Moscow street were circulated with the question "Do we need this?" written on them.

Mikhail Butrimov, the leader of My Courtyard, turned up the demonstration in a checked shirt. "We are not against the mosque, we are for the park," he said and explained that he had been asked by local residents to help.

"An original idea," added Galina Kozhevnikova, deputy director of the Moscow-based SOVA Center for Information and Analysis, which monitors extremist activities and human rights abuses; "to camouflage xenophobia as a concern about people's well being."

According to SOVA's information, Butrimov and his activists have links to the ultra-nationalists, such as the nationalist party Popular Union. Some far-right websites feature poems penned by Butrimov including one in which he calls upon foreigners to "quake in fear before the leaders of tomorrow."

The Moscow mufti council, which is responsible for building the mosque, is convinced that nationalists are behind the protests against their house of worship. They say that the mosque will be built at the edge of the park anyway, leaving plenty of room for recreation and dog walkers. "The problem lies elsewhere," says Ildar Aljautdinov, the imam at Moscow's largest mosque. He warns that some Muslims may become radicalized if they don't have mosques to worship in. "We must build more mosques," he says. "Otherwise something bad will replace the religion."