German Defense Minister Franz Josef Jung (CDU) was in a good mood as he strolled back into the press center after a lunch with his counterparts within the NATO member states. In his words, he had just come from a "responsible discussion" that had taken place in a "good atmosphere" and among friends. Relaxed, and sometimes even smiling, Jung reported that he had forcefully explained the German mission in Afghanistan and its successes, and that his words were met with strong recognition. 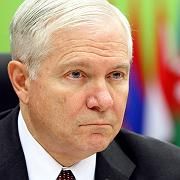 US Defense Secretary Robert Gates: "The excitement over what I said or wrote is exaggerated."

In truth, the mood at Thursday's luncheon was matter-of-fact. Foreign diplomats reported that Germany was not mentioned once in the working meeting on the NATO mission in Afghanistan, despite the unspoken wish for a strong commitment from Berlin. Although US Secretary of Defense Robert Gates called upon all NATO members to do more and, above all, to send more combat troops, he did not specifically address his comments to his German colleagues or the government in Berlin.

This harmony may seem surprising at first glance, especially given the harsh US letter to the German government and other NATO allies and the public differences between the two countries. However, anyone who is familiar with the dynamics of these NATO meetings already knew not to expect serious disputes or heated discussions in Vilnius. "Before the summits, the clearest of language is used in rhetoric, threats and retaliations," says an experienced European diplomat, "but then it's all sweet talk at the meeting itself, where diplomacy still rules."

In this spirit, the day ended with all participants showing their conciliatory sides while clearly remaining faithful to the issues. NATO Secretary General Jaap de Hoop Scheffer was "cautiously optimistic," and yet he reiterated the urgent need to send "more combat troops to the volatile south." "The mission demands the sharing of responsibility and risks," he argued, "but we haven't arrived at that point yet." This, he added, only encourages him to continue urging the partners to increase their commitments.

A few minor concessions were achieved in the Lithuanian capital. For instance, Belgium, France, Poland and Romania agreed to deploy smaller units to Afghanistan. Nevertheless, there were no significant breakthroughs. If the commanders had their way, about 7,000 new soldiers would be added to the current NATO ranks, especially in the south. Seen in this light, the smallest contingents are little more than drops of water on a hot stone, much like the German promise to send more combat troops to the north.

It was the comments that came after the official discussion that revealed the true inner conflict within NATO. While German Defense Minister Jung talked at length about what he characterized as a "comprehensive approach" and repeatedly stressed that the mission in Afghanistan could not be won exclusively on the battlefield, US Defense Secretary Gates was only interested in discussing the combat mission. Specifically, Gates called for the deployment of more troops to the south. He also emphasized that the 3,200 Marines the US is sending to the region represent a "one-time effort."

Gates took pains to keep emotions out of the dispute, and clearly qualified the letter the Germans had perceived as harsh. "I believe that the excitement over what I said or wrote is exaggerated," Gates said. "In the letter, I merely asked them to look into whether they could make an additional effort and find more troops. That's all." Comments like this -- evidence of a shoot first, talk later approach -- are also par for the course at NATO meetings.

Meanwhile, the US government was not lacking in symbols during the Vilnius meeting. Secretary of State Condoleezza Rice and British Foreign Secretary David Miliband paid a spontaneous visit to combat troops in Kandahar. The trip was clearly meant to send a signal: While you spend your time talking in Vilnius, we're actually doing something and visiting our boys. "I think everybody has to step back and concern ourselves with the Taliban," Rice said in Kandahar. Her message was heard loud and clear in Vilnius: Everyone should fight and accept risks.

Despite the outward harmony and the smiles for the group photo, significant differences within the alliance became apparent in Vilnius. While the United States, Great Britain, Canada and the Netherlands have placed their bets on the war against the Taliban and no longer want to bear this burden alone, countries like Germany are convinced that their reconstruction mission is working. This divide will become all the more apparent at the NATO summit in April, when an overall concept will be presented.

"Creative" Support Instead of Combat Troops?

On one issue, at least, the United States is apparently thinking one step ahead of everyone else. The delegates in Vilnius were surprised to hear Gates' suggest that NATO countries like Germany should "consider other, more creative ways, that they may be able to contribute" if political reasons at home prevent them from sending combat troops to the south. He specifically mentioned helicopters as an example, but behind closed doors he apparently suggested that these allies provide security forces to protect buildings and airports.

The slugfest some had expected in Vilnius failed to materialize. Nevertheless, the German government will have to consider how to respond to the Washington's demands, which it is likely to hear once again at the Munich Conference on Security Policy this weekend. At the Hotel Bayerischer Hof, the site of the conference, the adversaries will meet directly and, in contrast to Vilnius, will no longer be obliged to observe the rules of gentle diplomacy when they meet face to face on Friday.

On Thursday German Chancellor Angela Merkel already established the baseline for the next phase of the debate. Merkel said that she didn't think it was a good idea to divide Afghanistan "into individual danger categories." She also made it clear that she opposes a German troop deployment in the south. "I think it would be a difficult thing if we were constantly rushing back and forth between the various regions in Afghanistan," the chancellor said.

Whether the German government will manage to stay its course remains unclear after the meeting in Vilnius. The meeting may have been conducted on a polite level, but the NATO countries involved in combat operations did not turn down the volume in stating their demands.