Josef Stalin, one of the greatest criminals in world history, didn't dare to do it. His successor Nikita Khrushchev likewise held back. So too did all the Kremlin leaders that followed them until the collapse of the Soviet Union in 1991. Will Vladimir Putin, one of three halfway democratically elected heads of state in Russian history, take the risk?

The exploit in question is the launching of an attack against NATO. More specifically, an attack on the Baltic states, which were once annexed by the Soviet Union after Hitler offered them to Stalin. Today, the border between the NATO member states of Estonia, Latvia, Lithuania and Poland on one side, and Russia and its ally Belorussia on the other, is 1,300 kilometers long. And if one adheres to the worldview of Lithuanian Defense Minister Juozas Olekas, it is here where great danger is lurking. It cannot be ruled out, says Olekas, that Russia will transform a military exercise near the border into an invasion.

Hawks like the former NATO commander Wesley Clark and former German General Egon Ramms refer to the border as the "Baltic Gap," an allusion to the famous Fulda Gap of the Cold War, the site on the eastern border of the German state of Hesse where military strategists feared a major Soviet tank offensive. It never happened. Now, though, the fear is that a massive Russian invasion could take place somewhere along the plains between the Estonian town of Narva, in the country's northeast, and the Belorussian town of Brest, located on the border with Poland.

At the NATO summit in Warsaw on Friday and Saturday, the alliance followed through on its desire to bolster its conventional forces. A rapid reaction force had already been established, but now, the alliance intends to station thousands of soldiers in the three Baltic countries and Poland. In case of a Russian attack, NATO is to have almost 50,000 troops available to beat it back. And there are plenty of military and political leaders who would like to see an even more robust presence.

The hawks would seem to be setting the tone at the moment. Russia is an "existential threat," NATO's then-top military commander, Philip Breedlove -- who also adopted a hardline position during the height of the Ukraine crisis -- said not long ago. This spring, Polish Foreign Minister Witold Waszczykowski said that Russia represents a greater risk to Europe than Islamic State. And at the beginning of June, the Danish NATO officer Jakob Larsen publicly suggested that "we need to learn to fight total war again." Larsen commands NATO's advance post in Lithuania and apparently isn't aware that the last call for "total war" was made in Germany during the infamous 1943 speech delivered in a Berlin sports stadium by Nazi propaganda minister Joseph Goebbels.

It is comments like those -- which have gone largely unnoticed by the public at large -- that recently led German Foreign Minister Frank-Walter Steinmeier to warn against "saber-rattling and cries for war." It was a comment reminiscent of the bon mot from former French Prime Minister Georges Clemenceau, who once said that war is too important to be left to the generals. The intensity of the criticism Steinmeier received as a result of his comments shows the lack of willingness to pause for reflection and to seek perspective.

The democratic West could certainly afford to be a bit more even-tempered. It is, after all, vastly superior to semi-authoritarian Russia in many respects,including militarily, economically and politically.

But for quite some time, a handful of neoconservative members of the so-called Strategic Community -- the small international circle made up of academic strategy experts, military officers and political leaders -- have once again been leading debates about waging and winning limited nuclear war against Russia. "America Must Prepare for 'Limited War'," was the title of an op-ed contribution by security expert and former US Defense Department advisor Elbridge Colby in The National Interest several months ago. Such arguments haven't been seen since the 1980s, a time when the East and West stood at the threshold of nuclear war.

Putin himself is largely responsible for the worsening of relations. With the annexation of Crimea, he transgressed international law and Russia's intervention in Ukraine violated the fundamental principles that once led to the end of the East-West conflict. His acolytes even threatened Denmark and Poland with nuclear strikes. It's no wonder that many now think he is capable of anything, even the worst. Yet it was comparatively easy for Putin to take Crimea from a divided Ukraine. NATO, by contrast, is the strongest military machine in the world and not even the loudest supporters of a stronger NATO presence in Eastern Europe doubt its fundamental superiority.

Moscow, after all, is still suffering the consequences of what was likely the most comprehensive peacetime disarmament the world has ever seen, one which came about with the disintegration of the Soviet Union. Despite Putin's recent efforts at rearmament, the Russian defense budget is only about a 10th of NATO's. Furthermore, the country's industry is underdeveloped and its population is aging. If Putin continues to drag his country along the path of anti-Western autocracy, Russia threatens to once again become the "Upper Volta with nuclear missiles" that former German Chancellor Helmut Schmidt once ridiculed the Soviet Union of being -- a derogatory reference to the French colony in Africa.

The West, too, pursued drastic disarmament following the fall of the Berlin Wall. But then came the war on terror -- and as the feeble Russian economy set clear limits to the Kremlin's ambitions, the US military took advantage of technological advances. The newly acquired ability to better identify and destroy mobile targets such as submarines and missiles has led some experts to speak of a "revolution" in weapons technology.

It is a revolution that has been underway for some time. Ten years ago, two American researchers caused a stir by performing a computer simulation of a US attack on Russia and publishing their findings in Foreign Affairs. According to the article, Washington possessed the capability to eliminate Russia's nuclear capability -- to destroy all of the country's atomic weapons -- with a single strike using bombers, intercontinental ballistic missiles or cruise missiles. The central message of the article was that the age of nuclear deterrence had come to an end -- an era in which both sides had to fear annihilation in the event of a nuclear attack because of the certainty of a retaliatory strike from the opponent. Instead of "Mutual Assured Destruction," the piece argued that the US was about to achieve nuclear primacy.

Many criticized the assessment made in the Foreign Policy piece for being overblown, but it cannot be doubted that America's strategic arsenal is technologically superior.

For some time, the US Air Force and Navy have been touting a new generation of conventional weapons for the realization of a capability known as Prompt Global Strike. The system envisions Washington having the ability to "strike targets anywhere on Earth in as little as an hour," as a new study performed on behalf of the US Congress recently noted. The US military, the study notes, wants to use the system to combat global terror.

One doesn't have to be anti-American to imagine the anxiety such scenarios trigger among Russian leaders. The shadow cast by George W. Bush is simply too long -- a US president who lied to the world to justify going to war against Iraq and who developed the Bush Doctrine, which reserved the right for the US to launch strikes to defend itself against possible threats, even before they became concrete.

The draft strategy paper prepared by the office of Paul Wolfowitz, Bush's deputy secretary of state, has also not been forgotten. The paper argued that the US should do everything in its power to block the emergence of a new, adversarial superpower, using military means if necessary. While President Barack Obama has pursued a different vision of international order, it is impossible to rule out the possibility that a future occupant of the White House will view the world through a similar lens to that of Bush, Jr.

A Return to the Cold War

It is an ironic twist of history that Russia is now invoking the same strategy of nuclear deterrence with which NATO approached the Warsaw Pact at the height of the Cold War. The conventionally weak Russians want to deter their potential enemy from attacking by threatening the use of nuclear weapons.

From our perspective, the imputation that NATO is preparing to march on St. Petersburg is absurd. The alliance is a defense partnership and neither Obama nor Merkel, Cameron nor Hollande want to change that, nor could they.

But imagining the worst-case scenario is not reserved for Western hawks. It is also an unfortunate tradition fostered by Russian military thinkers. When Soviet archives were opened following the end of the Cold War, among the biggest surprises was the fact that the communist elite in Moscow had considered an attack on NATO, an alliance that even then saw its primary raison d'être as keeping the peace.

In the fall of 1983, Moscow fears of a Western attack became so large during a NATO military exercise that the Kremlin placed a portion of its nuclear arsenal at a higher state of alert, while KGB agents sought to find out if the British had increased its blood supplies in preparation for war. After the Cuban Missile Crisis in 1962, the first days of November 1983 are now considered to be one of the most dangerous episodes in the history of the East-West conflict.

Former KGB man Putin and most of his confidants grew up in the Soviet system. They have never ceased seeing NATO as a threatening organization.

Curiously, Western superiority isn't just worrisome for strategists in the Kremlin, it also creates a logical conundrum for those in the West who favor the boosting of NATO's presence in Eastern Europe. Doing so makes it seem as though Western defense ministers don't completely trust the deterrent effects of US nuclear missiles and bombers. On the other hand, if they truly believed that Putin was considering an attack, then they would have to go far beyond merely stationing a few thousand soldiers in the Baltics. Rather, they would have to build up a huge army to wage war on site. And that would mark the definitive return to the Cold War.

Absolute security for one side translates to absolute insecurity for all other powers. Putin has already announced that he will react to the new NATO moves with countermeasures.

The declared goal of NATO's more robust presence is that of making the eastern edge of the Western alliance more secure. It is legitimate to doubt whether NATO will achieve that goal. 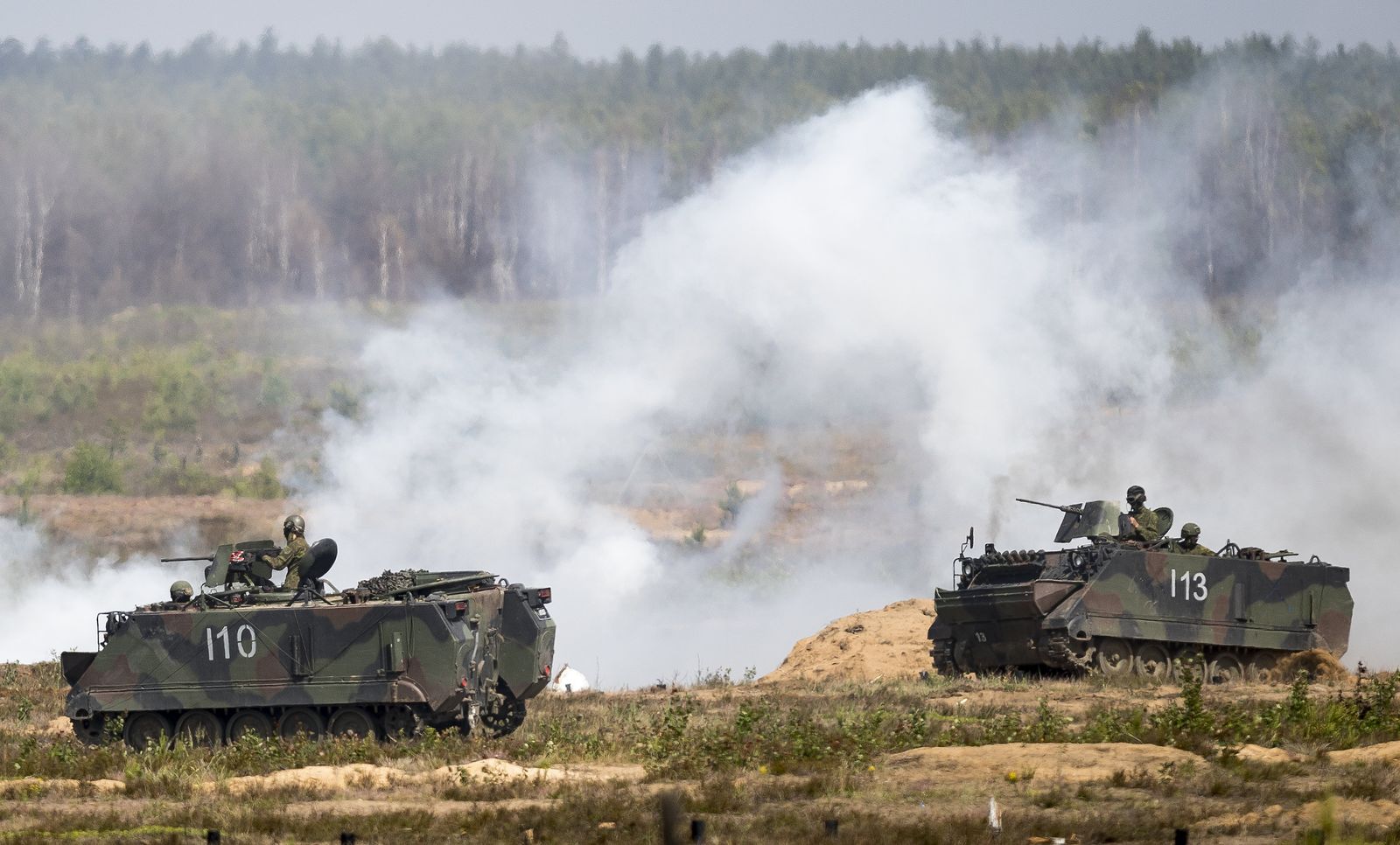 A NATO military exercise in Lithuania in June.