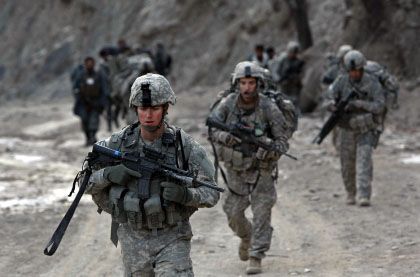 US Army soldiers in Afghanistan: "The Obama administration is trying not to repeat the mistakes of the Bush years."

SPIEGEL ONLINE: The conflict in Afghanistan will be at the heart of the debates at the NATO summit this weekend. Is the mission there still a NATO one -- or has it been turned into an American war with the deployment of 17,000 additional United States troops?

Hamilton: It is still a NATO operation. Actually, there is a NATO operation and an American operation in Afghanistan. The key challenge will be to figure out how much can be done by the NATO part and to what extent the Europeans want to contribute. Their contribution is important. The Obama administration is trying not to repeat the mistakes of the Bush years. Then, the Americans more or less turned down European help in Afghanistan offered after the attacks of Sept. 11. It took them a long time to realize that this help can be very constructive. Now, as part of its broad-based strategy review for the region, the White House is on the path to a much more multilateral approach. The basic approach is the Americanization of the war coupled with regionalization and internationalization of the broader effort regarding Afghanistan and Pakistan.

SPIEGEL ONLINE: But is the debate over more European troop deployments to Afghanistan really over, as many leaders here hope? They seem to believe that the Americans decided to shoulder the military burden there alone.

Hamilton: The Obama administration has widely consulted with the Europeans and a new trans-Atlantic agreement seems to have emerged. The Americans have sent more troops now but this comes with a request to reaffirm the importance of the mission, as just happened at the Afghanistan conference in The Hague. The White House isn't explicitly asking for more troops -- instead, it is suggesting that the Europeans can contribute in other areas such as police training, reconstruction efforts or support for good governance. There will be a call on the European nations to step up their commitment, but in ways tied to their national debates.

SPIEGEL ONLINE: Does that mean that a country like Germany, where calls for sending additional troops to Afghanistan are deeply unpopular, won't have to expect further requests from Washington in an election year?

Hamilton: The German case is particularly interesting. We seem to be observing a return to the "checkbook diplomacy"that has dominated German foreign policy for so long. During the years of the Bonn Republic, the Germans couldn't send troops into war zones due to constitutional constraints. They often helped financially instead. One could say: They couldn't play internationally but they could pay. This pattern was overcome, but we seem to be experiencing a renaissance of it now, ironically in the middle of a financial crisis where even checkbook diplomacy is no longer very popular. It is a worrying tendency because our foreign policy challenges are very real. This is not the time to avoid tough decisions.

SPIEGEL ONLINE: But tough decisions are unlikely to come up at the NATO summit. The debates in recent years on burden-sharing within the alliance seem to have been be defused by the new trans-Atlantic agreement you outlined. Most European nations will focus on areas other than the fighting. Is that a sustainable concept for NATO?

Hamilton: One should not forget that the Europeans are doing a lot in the NATO context -- in the Balkans, for instance. They are also still very active in Afghanistan, and it's is not as if they didn't shoulder any burdens militarily. However, an arrangement in which a few countries like the US, Great Britain or Canada do most of the fighting and dying in Afghanistan and other places will tear the alliance apart in the long run.

SPIEGEL ONLINE: Obama has linked progress in Afghanistan to stronger efforts in Pakistan. Can he count on more support for that strategy at the summit?

Hamilton: This more comprehensive approach is the strongest signal of the new thinking of the current US administration. The fresh focus on Pakistan will also be a good test for the Europeans to show how serious they are about greater commitments in the region. Many European leaders say dealing with Pakistan would be simply too hard for them, they wouldn't have enough leverage. But they don't even seem to try very hard. It is telling that some nations appointed special representatives for Pakistan and the region. The European Union, however, still has not even appointed a special representative for the country. Why not? What is the EU strategy for Pakistan?