It was a strenuous weekend for Jens Stoltenberg. At the Munich Security Conference on Feb. 14, a rift opened between the United States and Europe on security policy. In an interview, the Norwegian NATO Secretary General is now evoking the alliance’s unity in the face of Russia’s new nuclear weapons, the climate crisis and the difficult situation in the Middle East.

DER SPIEGEL: Mr. Secretary-General, in 1947 scientists involved in the development of the first nuclear bomb invented the Doomsday Clock. What time would you say it is right now?

DER SPIEGEL: That’s right. The Doomsday Clock recently got moved to 100 seconds before midnight. We’ve never been this close to 12 before. Do you think that’s justified?

Stoltenberg: It’s hard to measure. It is clear that we need to do what we can to prevent conflict. That’s exactly why we have NATO: The main task of NATO is not to fight a war, but to prevent it. We have done that very successfully in the past 70 years. In uncertain times like the ones we are experiencing today, it is more important than ever to have strong multilateral institutions like NATO.

Stoltenberg: The new Russian missile systems are highly dangerous. They are mobile, they are easy to hide and they can reach European cities with very little warning time. That lowers the threshold for the use of nuclear weapons and increases the risk of miscalculation.

Stoltenberg: We will not mirror what Russia does. But our deterrence must remain credible, and that means adapting to new circumstances – in this case, to new Russian weapons. At the same time,  we are working to strengthen disarmament and arms control.

DER SPIEGEL: The Russians are spending billions and they are taking considerable risks. Why are they doing all this?

Stoltenberg: We see what that Russia is doing. I don’t want to speculate about motives.

DER SPIEGEL: The Pentagon in the United States has a theory: The Russian government might consider a first strike with tactical nuclear weapons in Europe, since it likely assumes that the U.S. wouldn’t strike back with its large strategic missiles out of fear of a nuclear war. What do you think? Would U.S. President Donald Trump risk New York to defend Tallinn?

Stoltenberg: NATO’s aim is to prevent conflicts. And it is based on a guarantee of one for all, all for one. If one ally is attacked, all allies will respond. This is the basis for credible deterrence Secondly, the U.S. is increasing its military presence in Europe. It’s hard to imagine a stronger expression of the U.S.’ commitment to its European allies. And, thirdly, NATO has a nuclear deterrent in Europe.

DER SPIEGEL: But at the Munich Security Conference, French President Emmanuel Macron created the impression that the U.S. could no longer be relied on and that Europe needs to consider its own nuclear deterrent.

Stoltenberg: The French as well as the British nuclear forces have deterrent potential and contribute significantly to our overall security. But again: We already have a nuclear defense in Europe – that of NATO. We have common leadership structures, common nuclear doctrines and joint exercises. All tried and tested for decades.

DER SPIEGEL: Will Macron’s proposals help or is he just becoming a kind of second Trump within NATO?

Stoltenberg: The French president has invited us to a debate, and we are having it now.

DER SPIEGEL: But not all debates strengthen the credibility of military alliances.

Stoltenberg: I am just describing what we have. We have a solid, tested nuclear deterrent. It is managed jointly by the 28 allies and we make decisions together.

Stoltenberg: That is France’s decision, and I respect it. If the French change their mind, they are welcome at any time. It’s important that NATO, as a multinational organization, is involved in nuclear deterrence because nuclear weapons are a serious matter.

DER SPIEGEL: Could Macron’s attacks on NATO also have to do with the fact that he is dissatisfied with you? Many within the alliance regard you as a mouthpiece for U.S. President Trump. He’s demanding more money from the allies or more involvement in Iraq -- and you are too.

Stoltenberg: I have a good relationship with President Macron, just as I do with all NATO leaders. It wasn’t President Trump who called on NATO to invest more in defense – it was all allied leaders at their summit in 2014. Germany agreed to this, and the U.S. president at the time was Barack Obama. It goes without saying that I, as secretary-general, am now pushing for these promises to be kept. If we want more Europe, then Europe must do more for defense.

DER SPIEGEL: Trump recently praised the NATO partners for increasing their defense budgets – with the help of figures you provided him with. Has the German government already thanked you for mollifying Trump?

Stoltenberg: These aren’t my figures. They’re official figures. There’s no sorcery involved. And when the glass is half full, I don’t say that it is half empty. We should recognize the progress we have made together and call it that. Besides, we’re not spending more money on defense because the U.S. president wants it. We are doing this for our own security.

DER SPIEGEL: Is Trump currently being so friendly toward NATO because he wants the alliance to relieve the U.S. of unpleasant tasks – in Iraq, for example?

Stoltenberg: We are in Iraq to protect ourselves from terrorists. Until only recently, the so-called Islamic State controlled an area as big as Great Britain. It’s easy to forget that. In Iraq, NATO is playing to its strengths, North America and Europe are cooperating. We’re working together in the NATO training mission and in the U.S.-led coalition to defeat the terror group ISIS. As a multilateral organization with well-established structures for decision-making, NATO has untapped potential to do more. That’s why we recently made the decision to enhance our training mission in Iraq.

DER SPIEGEL: So you are creating the desired relief for the U.S.

Stoltenberg: The idea that NATO goes in and the U.S. goes out is simply wrong. Look at Afghanistan, look at our presence in the Baltic region or in Kosovo. The U.S. is standing behind its commitments more than ever. NATO is already in Iraq, and we have decided together to do more there. We don’t yet know how many soldiers will be needed. We are awaiting the advice of our military commanders.

DER SPIEGEL: The German armed forces, the Bundeswehr, are currently training soldiers on their own initiative in the autonomous Kurdish region of northern Iraq. Should they also take part in the NATO training mission?

Stoltenberg: That’s a German decision, but I would, of course, welcome it. Germany would be welcome in our multilateral mission, which is currently led by a Canadian, who will be followed by a Danish general at the end of the year.

DER SPIEGEL: The issue is extremely controversial within the German federal government. Do you wish Germany would be more a driving force in the alliance?

Stoltenberg: Germany is making outstanding contributions within NATO. It’s leading the battle group in Lithuania and it’s involved in the Aegean Sea and in Afghanistan. I also appreciate new proposals.

Stoltenberg: You know, we are 29 democracies. We have different coalition governments, we change our ministers and government crises are a part of that – otherwise they wouldn’t be democracies.

The article you are reading originally appeared in German in issue 9/2020 (February 22nd, 2020) of DER SPIEGEL.

DER SPIEGEL: At the Munich Security Conference, you suggested that NATO could soon move to reduce the number of its soldiers, including Germans, in Afghanistan. Should we really leave the country to the Taliban again?

Stoltenberg: No, and that’s why NATO will continue to support the Afghan security forces. Of course, we will not stay in Iraq or in Afghanistan forever. The aim is to create the conditions that allow us to reduce our presence and one day leave. But we have to make sure that when we leave, we are not jeopardizing all the gains we have made. In Afghanistan, I am thinking not least of the progress that has been made in the human rights situation, especially women’s rights. The U.S. and the Taliban are closer to an agreement than ever before. If it comes to that, we are ready to adjust our force level.

DER SPIEGEL: What do you mean by "adjust”? There are still 16,000 NATO soldiers in the country.

Stoltenberg: We will not immediately reduce them to zero. But if the Taliban can demonstrate that they are capable and willing to reduce violence and participate in intra-Afghan negotiations, then this is an important step which Germany, by the way, also supports. Besides, we have already greatly reduced the number of troops: Not so many years ago, we had 130,000 soldiers in combat operations in Afghanistan.

DER SPIEGEL: Let’s go back to the Doomsday Clock. It’s not just ticking faster because of nuclear weapons. Climate change is also considered an existential threat now. How is NATO addressing it?

Stoltenberg: Before I became secretary general, I was, among other things, the United Nations envoy for climate, and I have been working on climate change for many years. Climate change is a conflict multiplier. Naval bases are threatened by the consequences of climate change. Extreme weather presents our soldiers with new challenges. There would be practical advantages if we could make NATO operations more energy efficient. One of our biggest weaknesses in Afghanistan was the transport of fossil fuels.

Stoltenberg: There may be different views on whether climate change is caused by humans. But nobody is denying that temperatures are rising. That’s why we can also address the issue by, for example, reducing emissions and using more renewable energies. That will reduce our dependence on fossil fuels. Again: That’s good for the resilience of our military operations and for the climate. 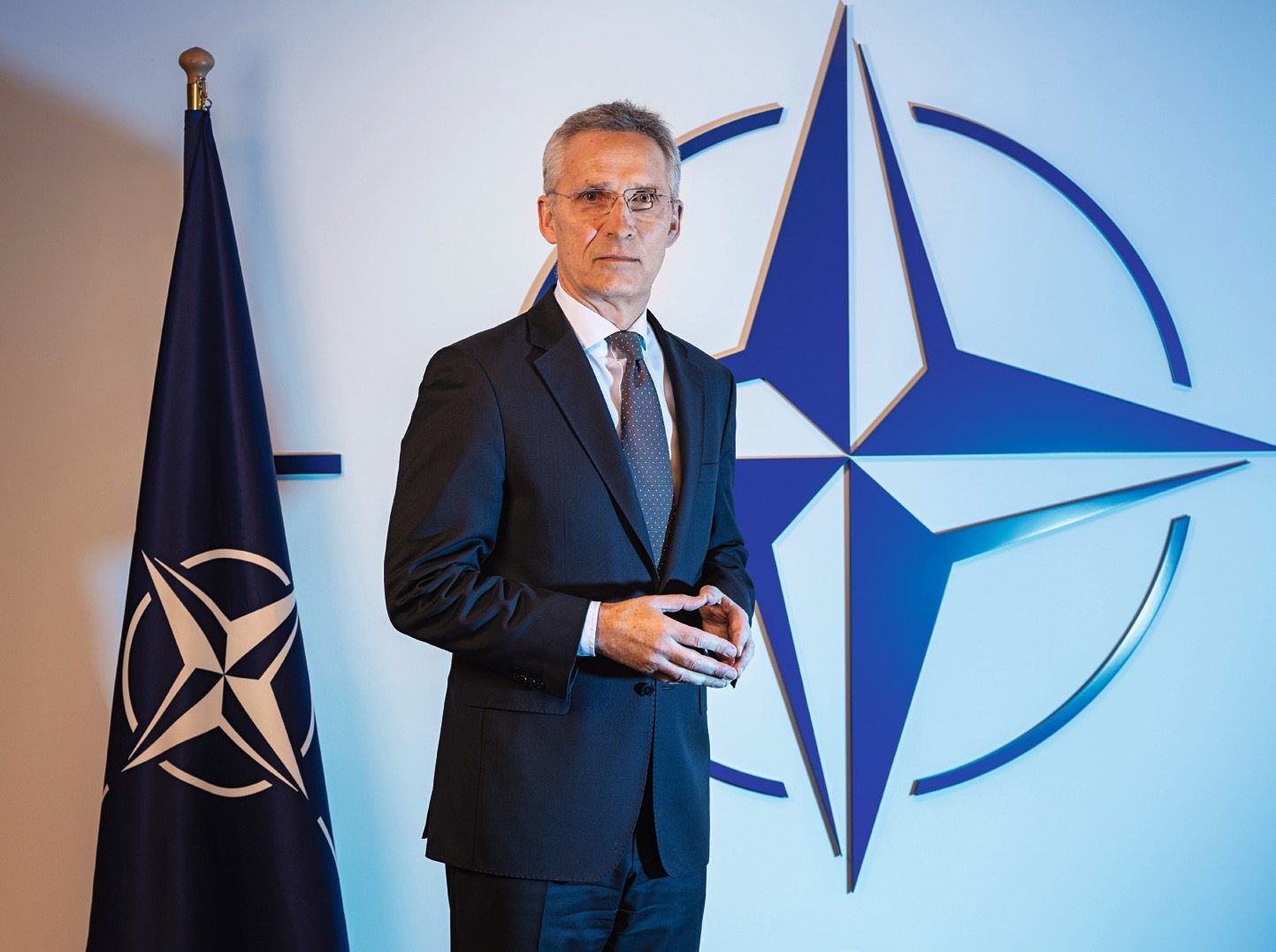 NATO Secretary Jens Stoltenberg: "One for all, all for one"