RAND Corporation simulations aren't for the faint of heart. The think tank in Santa Monica, California is a progeny of the Cold War and the 1960 study conducted by legendary systems theorist Herman Kahn -- which examined the consequences of nuclear war -- has not been forgotten.

He believed the aftermath could be managed. Following a nuclear conflict, Kahn proposed, contaminated food should be reserved for the elderly since they would likely die before contracting cancer as a result of radiation. The researcher thus became one of the inspirations for Stanley Kubrick's film satire "Dr. Strangelove or: How I Learned to Stop Worrying and Love the Bomb."

Several weeks ago, the California-based game theorists released another study that received a fair amount of attention. Financed by the Pentagon, they created a series of simulations for a hypothetical Russian invasion of the two Baltic states of Estonia and Latvia.

"The outcome was, bluntly, a disaster for NATO," the RAND researchers wrote in their report. In each simulation, the Russians were able to either circumvent the outnumbered NATO units, or even worse, destroy them. Between 36 and 60 hours after the beginning of hostilities, Russian troops stood before the gates of Riga or Tallinn -- or both.

The RAND simulation triggered heated debate. In an article headlined "How I Learned to Stop Worrying and Love NATO's Crushing Defeat by Russia," American military expert Michael Kofman questioned strategic parameters used in the simulations. "No one can intelligently articulate the benefits of such potential actions for the Russians," he wrote.

But the game theorists from Santa Monica aren't the only ones simulating grim scenarios these days. The Russians are conducting giant military exercises to practice for a war with the West. At the same time, they are reinforcing military units stationed in the exclave of Kaliningrad, located between Poland and Lithuania.

NATO in turn intends to station rotating battalions to the Baltic States as a signal to Moscow that the alliance takes its commitment to mutual assistance seriously. Security experts and generals, though, are complaining that such moves are not enough and are pushing for the stationing of larger and -- especially -- more permanent units on the alliance's eastern flank.

It has been several months in coming, but the Ukraine crisis has now led to a renaissance of Cold War-era military thinking. In the 1980s, Western military leaders spoke about the strategic vulnerability of the Fulda Gap. Today, it is Poland's Suwalki Gap that is giving them sleepless nights.

At the NATO summit in Warsaw in early July, leaders of NATO member states will discard their policy of "trust" and recommit to a policy of "deterrence." Just like before.

The change will have wide-ranging consequences. Because no matter how many units are ultimately stationed in the east, one thing is clear: It will be expensive. The peace dividend has been exhausted. For a quarter of a century, NATO states were able to shrink their military forces: It made sense and saved money. The German military, the Bundeswehr, alone shrank from half-a-million soldiers to 177,000 over the course of 25 years.

Now it has become clear that force reduction went too far. Lots of European armed forces are operating at the limits of their operational capacity, with too few soldiers and old, worn-out equipment. Over the years, a strong need for investment has accrued. Some Bundeswehr units today are so ill equipped that they need to trade scarce equipment among each -- a process referred to as "dynamic availability management."

The Americans in particular are putting pressure on the Europeans to once again invest more significantly in their own defense. In March, US President Barack Obama complained about the European "free riders" who are profiting from American protection while refusing to take on their "fair share."

Since then, numerous NATO states have announced that they intend to once again invest more money in defense. Fifteen of the 28 member states have increased their military spending, especially in countries on the NATO's eastern flank that feel most threatened by Moscow. The Czech Republic raised its defense budget by 6 percent, Slovakia by 17 percent, the small state of Latvia by 16 percent and Poland by fully 22 percent.

In Germany, Defense Minister Ursula von der Leyen, a member of Chancellor Angela Merkel's center-right Christian Democrats, has been trying for months to communicate the urgency of the new situation to the public. In late January, she announced the new approach. By 2030, 130 billion is to be spent on equipping the Bundeswehr. Two weeks ago, she added a personnel element. Rather than continuing to reduce the number of men and women in uniform, she said: "Now it's time to grow once again."

Von der Leyen doesn't have to worry much about resistance: The center-left Social Democrats (SPD), who are part of Merkel's government, and several members of the opposition Green Party also want to increase defense spending. After it became known that the defense budget would only grow by 2.3 billion next year to 36.6 billion, Rainer Arnold, SPD defense policy spokesman, promptly spoke out.

The additional resources, he argued, were "fully insufficient." It would "not allow for the serious addressing of needs." Green Party parliamentarian Tobias Lindner added: "That won't be enough, by far."

The defense minister will have been happy to hear such critique. For once, the criticism is trending in the right direction for her. Furthermore, she knows that public opinion is on her side. According to an opinion poll conducted by the Bundeswehr, 51 percent of Germans are in favor of a larger defense budget and only 13 percent are opposed.

Acclaim for the "significant turnaround" in Germany is coming from Brussels. NATO General Secretary Jens Stoltenberg told SPIEGEL: "There is finally a concrete proof that Germany is taking a leadership role when it comes to the various threats facing NATO."

It is a message he delivered back in January as well, when he indicated that alliance member states were making progress. "After many years of substantial reductions in defense spending, the cuts have now practically stopped," he said.

At the last NATO summit two years ago in Wales, member states pledged they would aim at investing at least 2 percent of gross domestic product in defense by 2024 -- and to invest 20 percent of that sum in equipment. The inclusion of the weak formulation "to aim" was primarily at the behest of Germany, which for years has been far away from the 2 percent level of defense spending.

At NATO headquarters in Brussels, Paul Savereux of Canada has the thankless task of crunching the numbers every year. As NATO's director of defense planning, Savereux is currently preparing the annual financial statement for 2015, which is to be ready for the summit.

Savereux and his team need to carefully check which expenditures they will accept. Will they consider Italy's carabinieri, which is structured under the military, as defense spending or not? How should they treat the huge pension payements accrued by many Eastern European countries after dissolving their enormous Warsaw Pact armies? Accepting such pension payments as required by NATO criteria results in increased defense spending but also in a lower proportion of that spending dedicated to equipment.

The two input parameters (2 percent of economic output; 20 percent investment in equipment) are released every year. But the nine output parameters, which are kept secret by NATO, are just as important. Every country is required to make a certain proportion of its armed forces available to the alliance: troops, aircraft, ships, land vehicles, personnel for NATO staffs. This list shows who is able to fulfill these guidelines and who is not.

SPIEGEL has obtained access to the 2014 overview. The confidential figures show that not a single country has fulfilled the criteria, not even the United States, though they are far ahead, as are the United Kingdom, Denmark, Germany and Norway. Romania and Lithuania have not fulfilled a single requirement. Poland, whose defense budget looks very good when seen in relation to its economic output, only managed to fulfill two output categories in 2014.

The official numbers show the amount of work member states must still do in order to reverse course as promised. If they want to spend more money on defense, they'll need to save it somewhere else. If the economy isn't going well, it becomes twice as difficult.

As such, public declarations have tended to go further than reality might allow. Rather than changing approach, it might be more accurate to speak of a "bottoming out," a term stock brokers use to describe a stock that has hit rock bottom after a rapid tumble and, after catching its breath, has slowly begun to rise again.

Military expert Christian Mölling from the German Marshall Fund in Berlin considers the official figures to be deceptive, because they only measure relations. It may be good news if Estonia massively increases its defense budget, but that's still irrelevant to the overall picture. Sixty-four percent of the overall defense budget of European NATO partners will be paid this year by its three largest countries: France, Germany and the United Kingdom. For this reason, even small changes in their spending have a significant effect.

In a study that has yet to be released, Mölling and his colleagues investigated the defense budgets and the related proclamations of the member states. The result shows how much work governments need to do if they want to successfully rejuvenate the alliance. The numbers NATO presents may be adjusted for inflation, but they ignore one factor that plays a large role for investments.

History shows that the prices of modern weapons systems increase far faster than normal rates of inflation -- at a rate of 5 to 10 percent. That means that the purchasing power of the equipment portion of the budgets shrinks to a far greater degree than the official figures suggest.

Mölling's team has calculated the budget pledges of European member states to the year 2020. According to those pledges, budgets would grow by about 39 billion. If one takes the rapid climb of equipment costs into account, a worst case scenario results in a spending drop of 2 billion in the worst case. In other words, budgets must be increased even further.

Mölling talks about "NATO's 2 percent illusion." If it was taken seriously, Germany would need to increase its defense budget by 5.5 billion year after year until 2024. In the end, Germany would be the continent's greatest military might by far, which probably wouldn't make all of its European neighbors happy.

It's very possible that the debate about defense spending will once again be stoked in November. If the isolationist Donald Trump is elected as US president, everything will change.

Trump has made it very clear what he thinks of NATO. "We are protecting them, giving them military protection and other things, and they're ripping off the United States." Either the NATO states pay back what they still owe the US, Trump argued, or they need to leave NATO. "And if it breaks up NATO, it breaks up NATO." 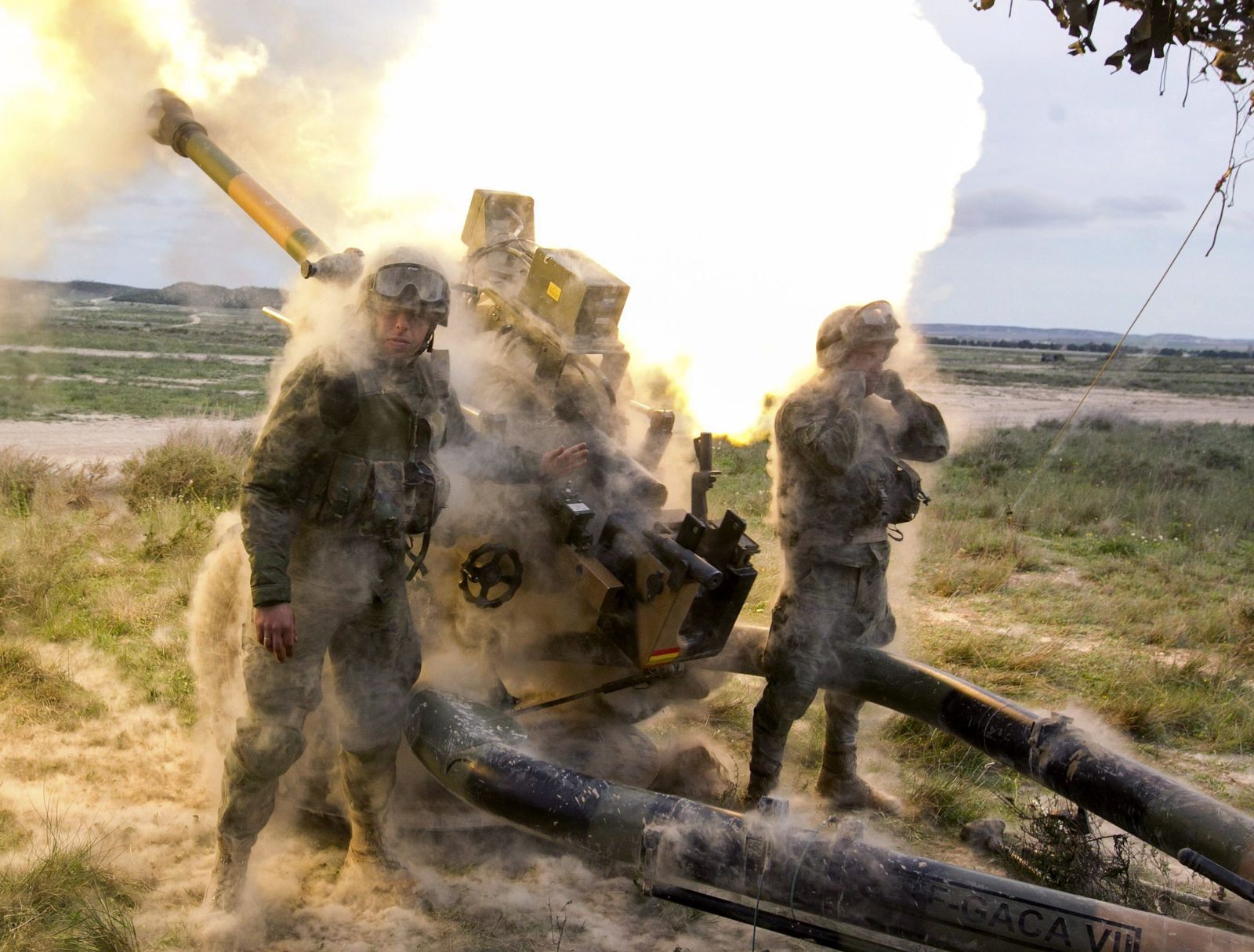 Spanish troops during a training exercise in April.