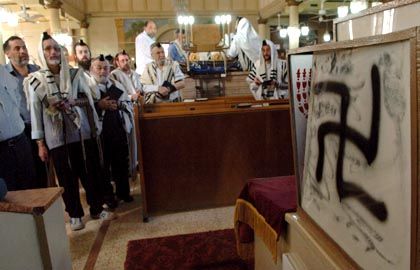 Nazi graffiti sprayed inside the Grand Synagogue in the Israeli town of Petah Tikva, near Tel Aviv, put Israeli police on the trail of the gang last year.

On Sunday police in Israel announced the arrest of eight young immigrants from the former Soviet Union who belonged to a homegrown neo-Nazi cell. It was the first time an organized Nazi gang had been uncovered in the Jewish state, which was founded 60 years ago in the wake of the Holocaust in Germany.

The young men -- aged 16 to 21 -- were accused of brutal beatings of homosexuals, guest workers, drug addicts, homeless people and ultra-orthodox Jews. A video presented by police to the Israeli cabinet on Sunday documented some of the violence: It showed skinheads kicking victims to a bloody pulp and giving Nazi salutes. Israeli Prime Minister Ehud Olmert called it "violence for the sake of violence," and said, "I am sure that there is not a person in Israel who can remain indifferent to these scenes, which indicate that we, too, as a society have failed in the education of these youths."

Police said the cell's leader was Eli Buanitov, a Jewish-descended Russian immigrant who swore in an e-mail never to have children. "I won't have kids," he wrote, according to detectives. "My grandfather is half Yid, so that this piece of trash won't have ancestors with even the smallest percent of Jewish blood."

Detectives started following the gang after swastikas and anti-Semitic graffiti appeared on two synagogues near Tel Aviv in May 2006. A number of yeshiva students near the synagogues were also mugged or beaten. Police say they arrested the eight men a month ago and found a stash of Nazi propaganda and weapons, including knives and explosives. A ninth suspect has fled the country.

"This was a cell, an active neo-Nazi group, that in fact began here in Israel in working and carrying out sabotages as well as different attacks on individuals," said police spokesman Micky Rosenfeld.

The notion of neo-Nazis in Israel is still so odd that the government has no laws against anti-Semitism. The eight men will be charged this week with causing bodily harm, illegally possessing weapons and denying the Holocaust.

Isolated acts of anti-Semitic violence aren't unknown in Israel, but experts put the new phenomenon down to a failure of integration among immigrants who flowed to Israel from the former Soviet Union in the 1990s. Israel's "law of return" offers citizenship to anyone with Jewish roots traceable to a parent or a grandparent. About a million post-Soviet immigrants have moved to Israel since the Iron Curtain collapsed, making up at least one-seventh of the current population. "Among them there were a few hundred new citizens with dubious ideas," says Moshe Zimmermann, a professor of German history at the University of Jerusalem.

The eight accused gang members came to Israel as children, mainly from Russia. Elana Gomel from Tel Aviv University, who has written a book about Russian identity in Israel, says some new immigrants aren't accepted automatically as Jews and feel like outsiders. "Because they have to work so hard to integrate themselves into Israeli society," she said, "some orient themselves against it."

About 300 crimes in Israel per year can be traced, officially, to people with neo-Nazi attitudes, says Zalman Gilichinsky, a Moldavian-born author who has written a book about Israeli anti-Semitism. "And the number is growing," he says. "The aggression isn't just becoming more common, but also more gruesome." Every Israeli city now has a marginal neo-Nazi cell with connections to similar groups in Russia, Gilichinsky says, and the real number of their crimes, he warns, is hidden behind official terms like "vandalism."

With reporting by Pierre Heumann in Tel Aviv