German-Israeli relations are generally a highly discreet affair. Disagreements are almost never discussed openly, which is what makes recent statements so conspicuous. The chancellor is looking forward to "open discussions among friends," her spokesman announced just ahead of Israeli Prime Minister Benjamin Netanyahu's planned visit to Berlin on Wednesday evening.

In diplomatic speak, "open discussions" are a euphemism for tense relations, which is indeed the situation between Berlin and Jerusalem. Israel was surprised by Germany's abstention from the United Nations vote to essentially recognize a state of Palestine by elevating it to "non-member observer status." Meanwhile, Netanyahu's subsequent announcement that 3,000 new housing units would be built in East Jerusalem has upset Merkel. His government has also announced it will withhold more than $100 million in tax revenue due the Palestinians this month in response.

Israel's tit-for-tat response was ill-received in a number of European capitals, with Great Britain, France, Spain, Sweden, Denmark and the Netherlands all summoning the Israeli ambassadors to voice their concerns. And while Berlin may not have followed suit, the German capital still used unusually sharp words to criticize Israel's building plans, with Merkel's spokesman Steffen Seibert calling them a "negative message" -- an indirect appeal from the chancellor to reverse the decision.

It's not the first time that Israel's prime minister has aroused displeasure in Berlin. In September 2011, Merkel also made her disapproval of Netanyahu's policy publicly known. In a phone conversation she said she lacked "any understanding" for Jewish settlement plans in Jerusalem. Merkel also allowed her government spokesman to convey her frustration openly -- an unusual occurrence.

Yet Netanyahu has been undeterred. He answered the decision by several EU states to summon their Israeli ambassadors with another act of defiance, announcing he would expedite the construction of another 1,600 housing units in Ramat Shlomo, an ultra-Orthodox settlement in East Jerusalem.

Even employees of the Israeli foreign ministry have been angered by this behavior, according to Israeli media reports. The newspaper Yedioth Ahronoth wrote that it's completely understandable for the diplomats that Israel's actions would be perceived in Europe as defiant and vindictive. Europeans are truly angered this time around, the daily said -- even Germany, Israel's closest ally.

Jerusalem is looking very closely at Germany's behavior. Netanyahu told German daily Die Welt that he was "disappointed" by Merkel, though he appreciated the chancellor's support during the most recent Gaza conflict, he said. "At the same time it would be insincere if I were to hide that I was disappointed over the German abstention at the United Nations -- like many in Israel," he added.

Yedioth Ahronoth called the German abstention at the UN General Assembly "the heaviest diplomatic blow." The newspaper Haaretz has also speculated over whether Germany would even support European sanctions against Israel. European leaders, however, say sanctions are not on the table at the moment.

Indeed, no one in Berlin is thinking of sanctions. Israel has always been able to count on German solidarity when it comes to existential questions. The most recent Gaza conflict is proof of that. When the radical Islamist Hamas fired rockets into Israel and the Israeli air force took action, Merkel and German Foreign Minister Guido Westerwelle emphasized German ties to Israel. At the same time, though, Germany took pains to maintain contact with the Palestinian Authority and Egypt.

Merkel has never created doubts about the fact that German-Israeli and German-Jewish relations are special. The government in Berlin knows that its history, the Nazi murders of millions of Jews, prevents it from simply taking the position of other European countries when they criticize Israeli policy. That would be a break from the status quo, and no one wants that in Berlin.

When Israel's security is in question, Merkel's center-right government has stood its ground -- in the conflict with Iran and on the question of controversial German weapons exports to Israel's neighbors. That's why a German submarine due to be exported to Egypt has been put on ice.

Before his visit to Berlin, Netanyahu, in the middle of his re-election campaign, traveled to the Czech Republic. The country was the only one in Europe to vote against raising the status of Palestine at the UN. Netanyahu said in a statement that he wanted to thank his Czech counterpart Petr Necas for his "brave vote." 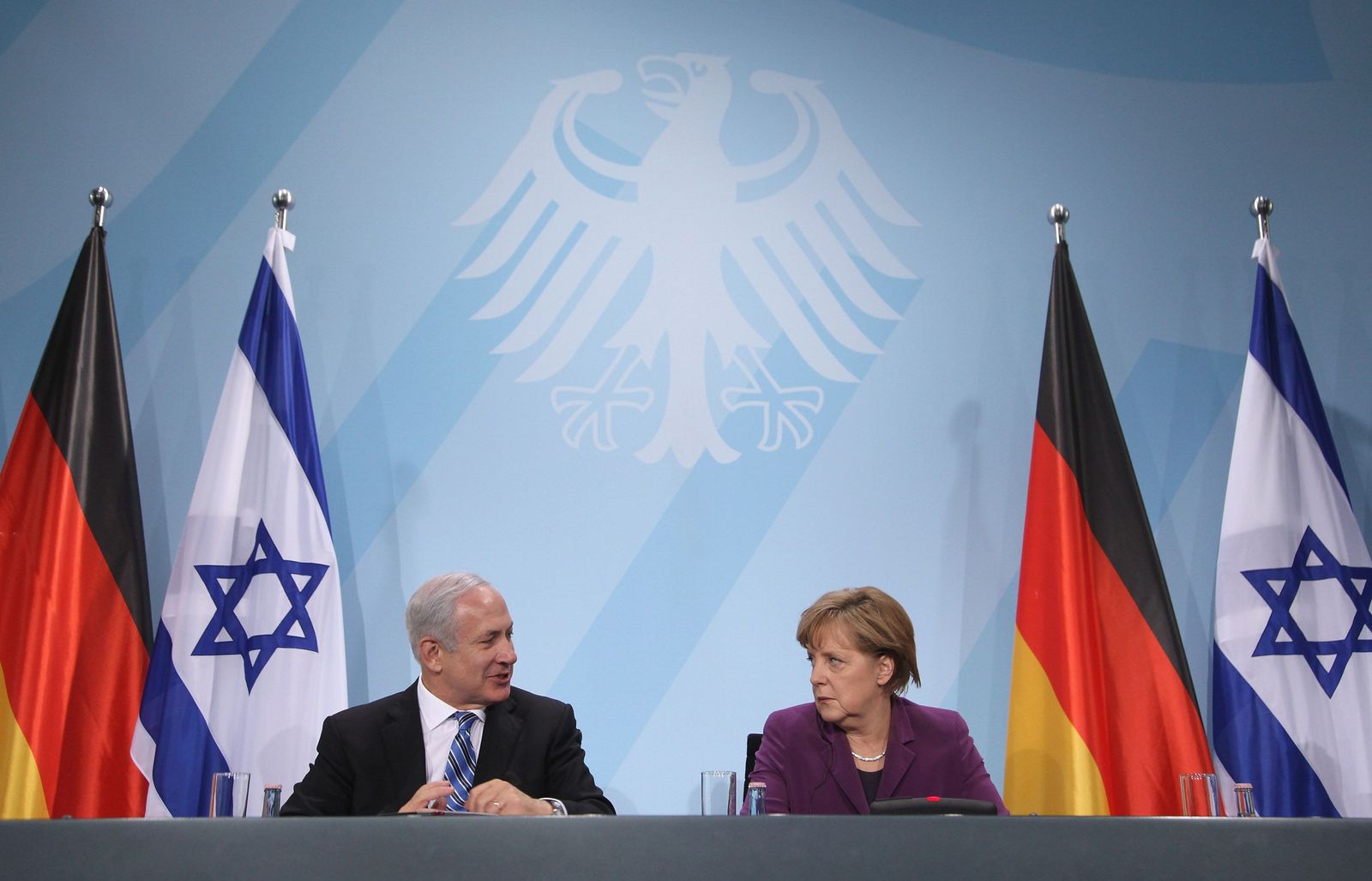 Netanyahu and Merkel during a meeting in Berlin in 2011. Rarely have Israeli-German relations been as tense as they are this week.