Day after day, Marie-Aurélie Bruno attaches caps wired with embedded electrodes to her patients' shaved heads. The neuropsychologist at the University of Liège in Belgium is looking for signals in the quivering readouts of the brain's electrical activity, where there might be a hidden message.

Bruno's patients are in a condition marked by both a "vegetative state" (VS) and a "minimally conscious state" (MCS). Most of the time, they seem completely withdrawn from the world, though their eyes remain open. Only occasionally does a blink of the eye or a squeeze of the hand reveal that some of these patients retain a small amount of consciousness. Listening in on their brains directly could allow better access to them. "In some individual cases, we might even be able to establish a channel of communication," says Steven Laureys, director of the research group in Liège. 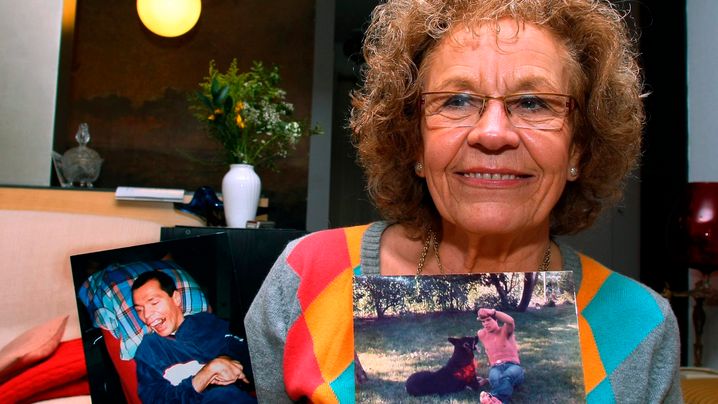 The technique the group is using has its origins in the laboratory of Niels Birbaumer, a neurologist at the University of Tübingen in southwestern Germany. "It has worked out pretty well for us," he says of the treatment he uses on patients with "locked-in syndrome" -- that is, ones who are verifiably fully conscious but paralyzed from head to foot. With the help of electrodes, some patients are able to communicate via a computer. A variety of letters appear on the screen in quick succession. By briefly concentrating on the word "yes," the test subjects can indicate the desired letter. Sometimes they manage this within a few seconds; sometimes it takes a full minute.

The researchers in Liège hope this technique might be able help the man who has become their most famous patient. After a car accident, 46-year-old Rom Houben spent 23 years in a persistent vegetative state, with his remaining consciousness undetected. For him, this technique could be the only chance he'll ever have to communicate with the outside world.

The staff at Houben's care center first tried an on-screen keyboard that he could operate using his right index finger, which is not fully paralyzed. For a while, it seemed like a good idea and, after some practice, Houben was able to type rather quickly. He made many mistakes, but his messages were understandable. Still, using that method required the assistance of a speech therapist, who stood behind him to support his hand.

At one point, Laureys, the neurologist, claimed that he had ruled out the possibility that it was actually the speech therapist doing the writing. But it turns out that his checks weren't quite thorough enough. Obtaining reliable results requires a rather protracted procedure. Patients with serious traumatic brain injuries are not always capable of following difficult instructions. They also sleep a great deal, and sometimes they sink into extended periods of delirium. In order to rule out false negative results, repeated tests need to be conducted over the course of several weeks.

Laureys has now carried out those tests, and his results hold that it wasn't Houben doing the writing after all. The tests determined that he doesn't have enough strength and muscle control in his right arm to operate the keyboard. In her effort to help the patient express himself, it would seem that the speech therapist had unwittingly assumed control. This kind of self-deception happens all the time when this method -- known as "facilitated communication" -- is used. (As a result, the things that Houben was attributed as saying to SPIEGEL for an article printed in November 2009 were also not authentic.)

In the more recent test, Houben was shown or told a series of 15 objects and words, without a speech therapist being present. Afterward, he was supposed to type the correct word -- but he didn't succeed a single time.

This doesn't necessarily discredit facilitated communication altogether. Laureys analyzed another paralyzed test subject who answered all 15 control questions correctly despite having a comparable brain-damage diagnosis. "That means it is really necessary to verify every single case," Laureys says.

Now the work with Houben will have to start all over again. But there is one thing for sure -- images taken of his brain activity reveal that it is behaving only slightly differently from that of a healthy brain. As a result, researchers are fairly certain that Houben is conscious -- and they find themselves in the desperate position of a rescue team trying to dig out a person from under the rubble.

Attempts to use a pedal, which Houben pressed with his right foot, had already failed before. He actually was able to press the pedal down, but spasms usually made him unable to lift his foot back up. "We'll simply have to find another way to him," Laureys says.

Trapped Inside Your Brain

Last week, it also emerged that Houben's case was not an isolated one. Cambridge University neurologist Adrian Owen and Laureys jointly performed brain scans on 54 VS and MCS patients. The procedure, known as functional magnetic resonance imaging (fMRI), shows which areas of the brain are active in real time.

Patients were asked to imagine themselves playing tennis or walking around in their own familiar apartments. Imagining each of these activities activates a different part of the brain.

Five of the 54 patients proved to be able to call up each scene when prompted. One patient was even able to answer questions using this technique: When asked questions -- such as "Do you have brothers?" "Is your father's name Thomas?" or "Is his name Alexander?" -- he was asked to think of tennis for "yes" and the apartment for "no." The correct brain region lit up every time.

This particular man is 29 years old and, like Houben, the victim of a traffic accident. For seven years, he lay in a vegetative state -- inaccessible. Even after his spectacular messages delivered with the help of the MRI machine, researchers still found no outward signs of consciousness. A thorough behavioral test elicited no reaction whatsoever from him. Indeed, he appears to be completely trapped within his own brain.

The study, which was published in the New England Journal of Medicine, provoked a global sensation. Although, such extreme cases occur only very rarely, the possibility can no longer be ruled out for any patient in a similar state.

So far, only an fMRI machine can offer any certainty. "But a single machine costs €4 million ($5.5 million) and weighs five tons," says Birbaumer, the brain researcher in Tübingen. "That's no help at all for everyday life in a nursing home or at home."

Searching for Other Ways to Communicate

In any case, the procedure is entirely unsuitable for Rom Houben in Belgium. One attempt ended without usable results because spasms make it nearly impossible for Houben to hold his head still. For him, electrodes that record brain waves -- like those used in Marie Bruno's experiments -- would be a more suitable method.

Bruno's first EEG studies of other vegetative patients in Liège returned reasonably encouraging results. Three of the 13 test subjects were able to answer her questions correctly often enough to make the results statistically significant. Nevertheless, the technique is still far from providing a reliable means of communication. Moreover, it's not easy to attach all the sensors in the right places and to precisely calibrate the electronic equipment. The electrode pads also have to be removed after a couple of hours so as to keep the damp skin beneath them from getting irritated.

Niels Birbaumer is hoping to get better results using dry electrodes that do not come into direct contact with the skin. Instead, they are simply placed on one's hair and can be worn for as long as desired. Still, at the moment, the signals these electrodes receive are still too unclear. "But in a year or two," Birbaumer believes, "the technology should be ready for the first experiments."

Of course, there already is one far better method, which involves implanting electrodes directly into the brain. This technique generally produces wonderfully clear signals, but it still has its risks. For example, there is a constant danger of infection, which could even be fatal in extreme cases. Under these circumstances, researchers face a difficult ethical dilemma. As Laureys asks: "Is it permissible to drill into the skull of somebody who's unable to give his or her consent?"