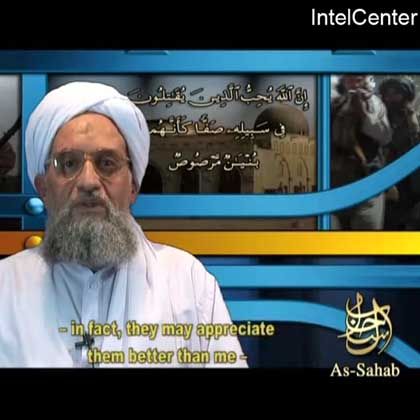 The SITE institute has received a copy of a video with a message from al-Qaida's No. 2, Ayman al-Zawahri.

Al-Qaida's No. 2 has released a new video calling for Muslims to unite in jihad and talking of plans to set up bases in Afghanistan, Iraq and Somalia.

The video was obtained by the Washington, D.C.-based institute SITE, which monitors radical Islamist communication, on Wednesday ahead of its official release.

In the one-and-a-half hour video entitled "The Advice of One Concerned," Ayman al-Zawahri, who is al-Qaida's No. 2 after Osama bin Laden, talks about the terror organization's future strategy. The network, he says, plans to set up camps in Iraq, Afghanistan and Somalia to train jihadists. Although al-Qaida is believed to already have camps on the border of Afghanistan and Pakistan, and is known to be present in Iraq, the claim the group plans to set up new camps reflects a new self-confidence on the part of the terror network.

The video, produced by the production firm as-Sahab, which is close to al-Qaida, is al-Zawahri's eighth so far this year and,m with its English subtitles, is obviously intended for a Western audience.

He encourages Iraqis and Muslims in general to show greater support for al-Qaida's insurgent front in Iraq, which he calls the Islamic State of Iraq. However, he implicity acknowledges problems with the front and admits, without going into further detail, that certain detractors say it lacks the "necessary qualifications." "The first thing which our beloved brothers in Iraq must realize is the critical nature of unity," he says, in a possible reference to the fact that a number of major Sunni Arab tribes have recently turned against the Islamic State of Iraq and begun cooperating with US forces.

'A Zionist Crusade Led by America"

He also criticizes Saudi Arabia's growing influence in Iraq and its support for what he called the "Zionist crusade led by America" in the Middle East. Al-Zawahri refers to Western media to back up his criticism of Saudi Arabia's support for the West, quoting US journalist Bob Woodward's book "Plan of Attack" and other Western reporting while discussing Saudi Arabia's culpability in the Iraq war.

Al-Zawahri also calls on Muslims to unite in jihad and adopt a more radical stance against the US and its allies, and he criticizes Hamas for not having introduced Shariah law. Last week's attempted terrorist attacks in London and Glasgow are not mentioned, however.

Meanwhile there are indications that for some Islamists, al-Qaida is no longer radical enough. A German Islamist Web site has excluded one of its members from participating on its discussion forums after she said that Osama bin Laden and other al-Qaida leaders were non-believers.

In a statement on the Global Islamic Media Front's German Web site, the site's operators said that Ummu Hamza al-Muhajira was being deleted from the membership list because she had condemned prominent al-Qaida leaders as "kafir" or apostates, a practise known as "takfir." "We are the supporters of jihad, and the mujahedeen will never be attacked from our forums," wrote the organizers of the German GIMF Web site, which publishes al-Qaida propaganda translated into German.

Al-Muhajira had apparently quoted texts originating from another German Islamist Web site called Ahl ul-Sunna wal Jamaah. The site publishes extremely radical sermons in German, declaring for example that Turkish Prime Minister Recep Tayyip Erdogan is a non-believer. The practice of takfir is controversial and is condemned by many mainstream Muslims.

The operator of the Ahl ul-Sunna wal Jamaah Web site, a Muslim man based in Augsburg, told SPIEGEL ONLINE that the GIMF accusations were correct.

"We have certain issues, based on Islamic theology, against these people," he said, referring to bin Laden and other al-Qaida leaders. There are areas "in which they have not correctly understood Islam," he said. He gave as an example the fact that bin Laden had not declared Hamas to be unbelievers, even though they took part in elections and had entered into a governing collation with Fatah.

With reporting by Yassin Musharbash