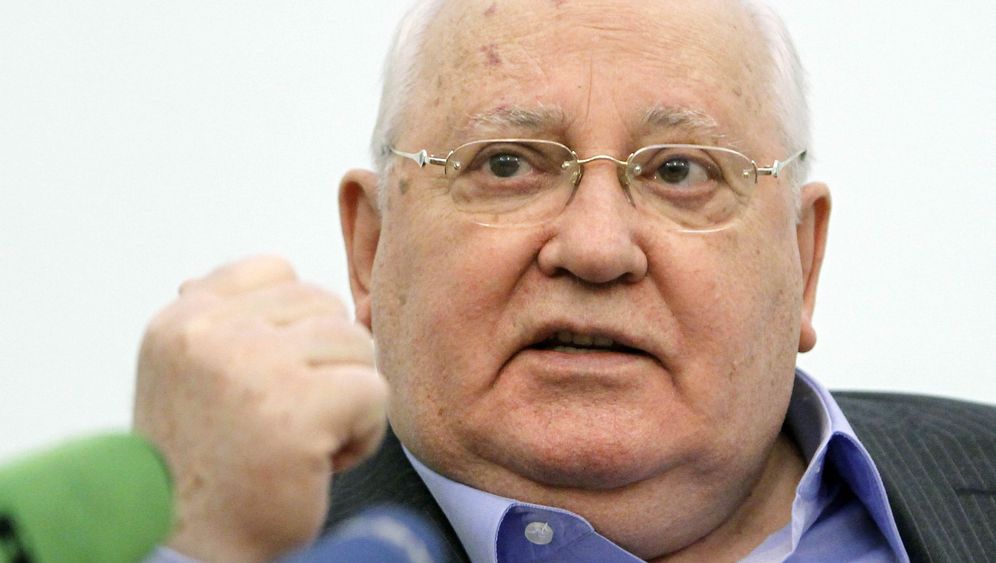 It's immediately apparent that he is in poor health. He is overweight, his face is puffy and, as he says, he has spent the last one-and-a-half years "almost entirely in the hospital." He has had four operations in five years and suffers from severe diabetes. He was even erroneously reported dead on Twitter last May. All of this has left its mark on him. Mikhail Sergeyevich Gorbachev, who turns 82 on Saturday, has spent these last five years working on a new book. The original Russian title translates as "Alone With Myself," a melancholy title that describes his mood more accurately than the title of the German translation, "All in Good Time," to be released in March.

Are we interested in reading yet another book penned by the first and last president of the Soviet Union? By someone who left the political stage 21 years ago? Gorbachev has already written five books. The first, published in 1989, was about perestroika, the rebuilding of Soviet society. Then he wrote one about German reunification and, in 1995, a book simply entitled "Memoirs." Hasn't everything been said by, and about, Mikhail Gorbachev? Don't we know enough of his truths by now?

Not quite. "Alone With Myself," published in Russia last fall, is the most personal book to date by the tragically failed reformer. He dedicated it to his wife, Raisa Maximovna, who died in September 1999. Gorbachev suggests that it wasn't her leukemia that killed her, but his perestroika, and her grief and profound mortification regarding how the Gorbachevs were treated in Russia after 1991.

"Fate was generous to me. It gave me a rare chance," writes the former Kremlin leader. But he also rails against his own fate, two decades after his forced departure from office.

Raisa Gorbachova, the former first lady of the Soviet Union, who was not very popular among Russians, is everywhere in this book. The couple had been married for almost 46 years when Raisa, who held a doctorate in sociology, died at Münster University Hospital in Germany, shortly before a planned bone marrow transplant. "We were happy together. She helped me overcome the darkest days," writes Gorbachev.

He describes how they met, how Raisa loved to wear nice clothes and how she didn't use lipstick until she was 30. He tells stories of how they celebrated their wedding in a student dormitory in 1953 on the anniversary of the October Revolution, of their first night together two weeks after their wedding, and of Raisa's abortion a few months later.

He writes about the mild stroke his wife had in the Crimea in the days following the 1991 coup, about her declining vision and the gradual onset of depression. He also describes her struggle with death, and the last days they spent together in Münster.

Some of the book is very intimate. Do we even want to know these details? But it's important to Gorbachev to arrive at such deep, inner confessions. When he has guests, the first thing he does is take them to see his wife's portrait.

The book also helps the reader understand what every Russian perceived during perestroika: Raisa Gorbachova wasn't just the wife of the Kremlin leader, but a driving force who went beyond her role as first lady. "You were lucky to find me," she reportedly said to Gorbachev on many an occasion. This is most certainly true of this Pisces, who was always more open to dreams and fantasizing than his tenacious, decisive and seemingly cold Capricorn wife.

Gorbachev now tries to correct the public image of his Raisa. Yes, she did have an aristocratic manner, he admits, which some felt was too mannered. But, in reality, she was an open-minded and, most of all, interested person.

"All the talk that she made political decisions and exerted pressure on me is nonsense," Gorbachev writes. "She didn't even know how the politburo works. She was more affected by what was written about those things in the newspapers. When Raisa was hovering between life and death, and when I and the family were at her side, people must have finally understood that we were united by deep feelings."

A Difficult Rise to Power

Politically speaking, "Alone With Myself" offers an insight into the innermost circle of power in the last two decades of the Soviet era. What went on there had little to do with the much-vaunted "unity and closeness of the party." Instead, the center of political power was full of intrigues and attacks, as well as haggling over every position.

For a long time, Gorbachev had nothing to do with all of this. After studying law, he didn't even manage to get a job with the public prosecutor's office, as he had intended. Instead, he faced the prospect of being assigned to Siberia or Tajikistan, in Central Asia. To avoid these fates, he returned to his native Stavropol, in the Caucasus region, where he laboriously worked his way up the party ladder.

It was a well-known fact that he owed his rise to prominence to Yuri Andropov, who would later become general secretary of the Communist Party for a short time. But now he reveals just how close he was with the then-chairman of the KGB -- and to his second mentor, Dmitriy Ustinov, the defense minister under Leonid Brezhnev and Andropov. Both men believed in the young Gorbachev and, in 1978, brought him into the fold as a counterweight to the ruling old boys' club at the Kremlin. Indeed, he couldn't have had better patrons in the Soviet system.

But Andropov knew how cautiously one had to proceed in intrigue-ridden Moscow in order to bring a newcomer like Gorbachev into the Politburo, and he shied away from the step a number of times. And when Andropov, already on his deathbed, wrote a letter to the party's Central Committee and proposed giving Gorbachev control of the Secretariat of the Central Committee, the sentence mysteriously disappeared from the copy sent to Central Committee members.

At the time, the Soviet Union was the biggest power in the communist world, and yet some of the things Gorbachev describes fall somewhere between tragicomedy and farce. For instance, when he invited Andropov, who had a dacha near his, to a private lunch, the head of the KGB turned him down. "I would hardly have been out the door with my wife before they would report it to Leonid Ilyich (Brezhnev), and the malicious chatter would begin: Who? Where? Why? Where to?"

Gorbachev describes how, in 1985, then-General Secretary Konstantin Chernenko, who was ill and two weeks from dying, was paraded before TV audiences as he threw his vote into the ballot box in the election for the Supreme Soviet of the Russian Federation. But the whole thing actually took place in a hospital room, and the trembling Chernenko fell down in the process -- which, of course, was edited out of the TV report.

My God, many will say, we've always imagined that this is what it was like. And, of course, it is also more significant that Gorbachev addresses his own political performance, and perestroika, more critically in this 600-page tome.

He didn't want revolution, Gorbachev writes, and he believed that it would take 25 to 30 years to restructure the country. This is an example of his old argument in self-defense: He, the head of the Kremlin, was on the right path, but he became a victim of circumstances. But then he also admits to having made mistakes. He writes that he should have been more ruthless in using the party machine, which was still powerful in 1985, to get his way. And he failed to replace the old guard quickly enough, he concedes. Placing himself at the head a new party, as many had advised him at the time, was "not that easy." And there he is again, Gorbachev the compromiser.

But now he openly discusses when it became clear to him what a forlorn mission he had taken on. It was in 1986, Gorbachev writes, when oil prices had dropped to $10 a barrel, wiping out two-thirds of the country's foreign currency revenues. At the same time, the government had raised salaries and pensions, and then substantial tax revenues were lost as a result of an anti-alcohol campaign. That was "the first stab in my back," Gorbachev writes. "But we were incapable of changing our policy."

He sees the second turning point in the country's first halfway free election in March 1989, when the Communist leadership lost by a landslide, prompting Gorbachev's opponents to launch a counteroffensive. The Communist Party should have learned its lesson from the defeat and become the moral leaders of a pluralistic society, Gorbachev writes. What an illusion! The party was already hopelessly discredited.

And now? Yeltsin. Always Yeltsin. Gorbachev still can't get over the fact that he was the one who paved the way to the Moscow stage for the provincial secretary from Sverdlovsk, the man who would topple him in 1991. He can't get over the fact that Yeltsin received many privileges when he resigned, while Gorbachev himself received only the equivalent of a $2 pension and no immunity from prosecution. He also claims not to understand why the Americans were so lenient toward Yeltsin's sins, such as the shelling of the parliament building in 1993.

But there is one story he is now telling that he had previously disclosed to only a very small group of people: Yeltsin tried to commit suicide on Nov. 9, 1987, after he had compared Gorbachev to Stalin before the assembled party leadership. The Central Committee fired Yeltsin, the head of the party in Moscow at the time, and transferred him to a construction agency. But it was only temporary.

It was generally known that Yeltsin was suddenly admitted to the hospital at the time, allegedly after having a "heart attack." But now Gorbachev reveals that his rival tried to kill himself in his office with a pair of scissors.

Gorbachev doesn't say it, of course, but if Yeltsin's suicide attempt had succeeded, wouldn't everything have turned out differently? And would Gorbachev perhaps still be president today?