In his second report on so-called "extraordinary renditions" of terror suspects, Council of Europe special investigator Dick Marty writes that there is "enough evidence to state" that American secret prisons in Poland and Romania existed. The illegal deportation of suspects by CIA kidnapping teams in Europe amounts to a "massive and systematic violation of human rights," the report says.

Marty, who conducted the investigation on behalf of the Council of Europe, accuses the CIA of having committing a number of transgressions: "We believe we have shown that the CIA committed a whole series of illegal acts in Europe by abducting individuals, detaining them in secret locations and subjecting them to interrogation techniques tantamount to torture."

In the report, Marty also takes aim at the "countries implicated in these programs," criticism that "applies to Germany and Italy, in particular." Marty's report claims that the countries not only failed to aid in investigations into the matter, but also actively obstructed them by classifying the subject of the investigation as "state secrets."

Invoking state secrets "in such a way that they apply even years after the event is unacceptable" and is "all the more shocking when the very body invoking such secrets attempts to define their concept and scope," it continues.

As recently as February, a European Parliament committe of inquiry was forced to concede in its final report on secret renditions that it had found no concrete proof for the existence of "black sites" in Eastern Europe. Marty is expected to present the report to the Council of Europe's human rights committee this afternoon, and a press conference is planned for 2 p.m. The Council of Europe is an international organization and watchdog for human rights in a total of 47 member states in the European region.

In his report, Marty is especially harsh in criticizing that, during the deportations, great care was apparently taken to avoid United States territory and air space since the deportations would "no doubt have been ruled unlawful and unconstitutional." The report also finds it "disturbing" that US citizens were never affected by the measures. Marty describes the situation as a "legal apartheid."

The special investigator concentrates essentially on two black sites in Poland and Romania. Discussing the Polish secret prison Stare Kiejkutz, Marty told the British TV station Channel Four: "The Polish setup was devoted to those people considered to be the most important terrorists, the ring leaders of the movement, who had the most responsibility. They were the most wanted men."

Marty lists eight flights during the period between 2003 and 2005 alone that he and his assistants attribute to the CIA'S HVD program. Most of the planes came from Kabul. The black site at Mihail Kogalniceanu in Romania was in use between 2003 and 2005 and used for lower-ranking HVDs, according to the report. 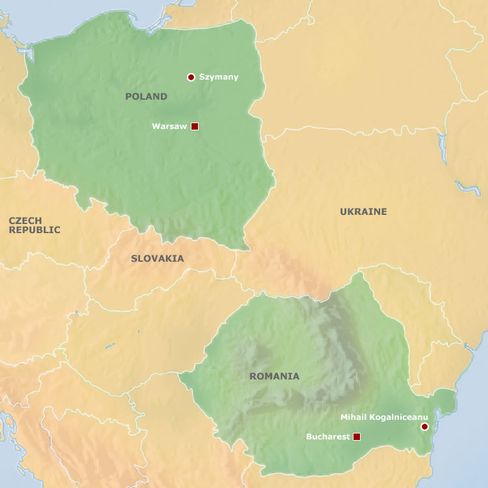 The locations of suspected CIA "black sites" in Poland and Romania.

Both prisons were "run directly and exclusively by the CIA," according to Marty. In Romania, the president knew of the existence of the black site, but not even the prime minister had similar knowledge. The CIA deliberately cooperated with military rather than civilian intelligence agencies because the military agencies are not under the supervision and control of parliaments, Marty states.

In his report, Marty cites anonymous but high-ranking sources as the basis for his claims. He was also able to evaluate flight data collected by the European flight security agency EuroControl. He had already written of a "spider's web" in his intermediary report, issued last June -- but he was sharply criticized for his early conclusions due to the weakness of the evidence at the time.

His new report supplements the findings of the European Parliament's committee of inquiry on key points. In February, that report also accused Germany, Italy and 12 other countries of "looking the other way" with regard to the CIA flights.

Marty's final report says records show that there were 1,245 proven CIA flights between 2002 and 2005, although it seems that only some of them were prisoner transfers.

The "series of illegal acts" carried out by the CIA was either tolerated or supported by the member countries of the Council of Europe, according to Marty. The North Atlantic Treaty Organization (NATO) provided the necessary international backing through resolutions passed on Oct. 4, 2001 -- which allowed what Marty describes as "blank check" overflight permits, for example. Marty suggests that secret protocols, to which he does not have access, record additional concessions the Europeans made to the United States. During the negotiations over the secret prison in Romania, for example, the US promised Bucharest its support for the Eastern European's country application for full NATO membership, the report alleges.

US President George W. Bush officially acknowledged the existence of a classified CIA program for the seizure, arrest and interrogation of terror suspects on non-US territory only last September, announcing at the same time that the measure would be discontinued following the transfer of 14 suspects to Guantánamo.

Earlier this week, the American Civil Liberties Union (ACLU) filed a lawsuit against aviation service Jeppesen Dataplan before a county court in San Diego, California. Jeppesen Dataplan is a subsidiary of US airplane manufacturer Boeing. The ACLU has accused the company of having rented out at least 15 airplanes for a total of 70 prisoner transfers -- transfers that violated US law and fundamental American values.