The truth about the war between Russia and Georgia over the breakaway republic of South Ossetia in August 2008 sounds somewhat convoluted, at least as expressed in the final report of the independent EU fact-finding mission charged with establishing the causes of the conflict. "Georgian claims of a large-scale presence of Russian armed forces in South Ossetia prior to the Georgian offensive on 7/8 August could not be substantiated by the mission," reads the document, which was published Wednesday. To put it more simply: It was Georgia who started the war.

This is the conclusion that the team of European investigators, headed by the Swiss diplomat and Caucasus expert Heidi Tagliavini, have reached after spending almost a year visiting the Georgian capital Tbilisi, Moscow and the locations of the fighting in a bid to reconstruct the course of the conflict. Their findings fill some 1,000 pages.

Just a few days ago, Georgian President Mikheil Saakashvili had insisted in an interview with US broadcaster CNN that no one took seriously reports that his country was responsible for the war. Responding to an interviewer question about a recent SPIEGEL story which reported that the EU committee had put the blame for the conflict on Georgia, Saakashvili said: "Everybody who was there, and there were serious people there, everybody knows what happened." According to Saakashvili's version of events, which he had distributed officially in a government report on the war, the night-time attack by Georgia on the breakaway region of South Ossetia on Aug. 7, 2008 was a preemptive strike directed against Russian armored columns which had supposedly already advanced into South Ossetia.

Already on the first day of the war, the brawny Georgian General Mamuka Kurashvili appeared on television in his dress uniform and boasted that Georgia had decided to "reestablish constitutional order in the entire region."

The EU report, which is extensive, detailed and well-informed, makes clear that the Georgian claims are completely fabricated. "It was Georgia which triggered off the war when it attacked (South Ossetian capital) Tskhinvali" said Heidi Tagliavini, the mission head, in a statement. Although the EU commission tactfully avoided using the word "lie," the report implies that Saakashvili did not tell the truth about how the war started.

Tbilisi is now predictably outraged at the results of the fact-finding mission. Georgia did not by any means use "disproportionate force," stresses Georgian Reintegration Minister Temur Yakobashvili. "We see Russia's actions as aggression, because the country invaded the Tskhinvali region with its troops."

Russian politicians, for their part, feel that the report's conclusions strengthen their position. "If the commission has acknowledged that it was Georgia who started the war, as Russia has repeatedly said, we can only welcome such a conclusion," said Natalia Timakova, a spokeswoman for Russian President Dmitry Medvedev.

Yet the triumphant mood in Moscow was tinged by a hint of bitterness. "The report has a major flaw," complained Sergei Makarov, a member of the Duma for the Kremlin party United Russia and a member of the Parliamentary Assembly of the Council of Europe. "It does not address the US's role in the conflict."

In a statement, the Russian Foreign Ministry also expressed its resentment about "ambiguous formulations" in the report -- a reference to passages in which the authors make it clear that they consider Russia to have been partly responsible for escalating the conflict. The report concludes that the mass issuing of Russian passports to South Ossetians, as well as to residents of another breakaway republic of Abkhazia, was in violation of international law. It also criticizes the fact that Moscow trained and armed South Ossetian troops.

In addition, the report's authors conclude that the reason given by Russia to justify the campaign to its own population was completely unsubstantiated. The Russian authorities had claimed that the Georgians had committed a previously planned genocide against the South Ossetian people. According to Kremlin propaganda, the Georgian offensive caused 2,000 deaths in a single night. Russia later reduced its figure for total South Ossetian civilian casualties to 162. "Although it should be admitted that it is not easy to decide where the line must be drawn, it seems, however, that much of the Russian military action went far beyond the reasonable limits of defense," the European investigators conclude.

Sentences like this one have irritated the Russian ambassador to NATO, Dmitry Rogozin. "This report has a pseudo-balanced approach," Rogozin told SPIEGEL ONLINE. "All the parties are criticized a little, including the Ossetians, the Russians and Georgia's Western patrons. But one no longer sees the wood for the trees."

According to Rogozin, the key thing is that the EU mission has clearly stated that Georgia started the hostilities. "But if the Russian military response has been criticized as being too harsh, then this is surely a matter of taste," Rogozin complained. "I certainly think it was still too lax." 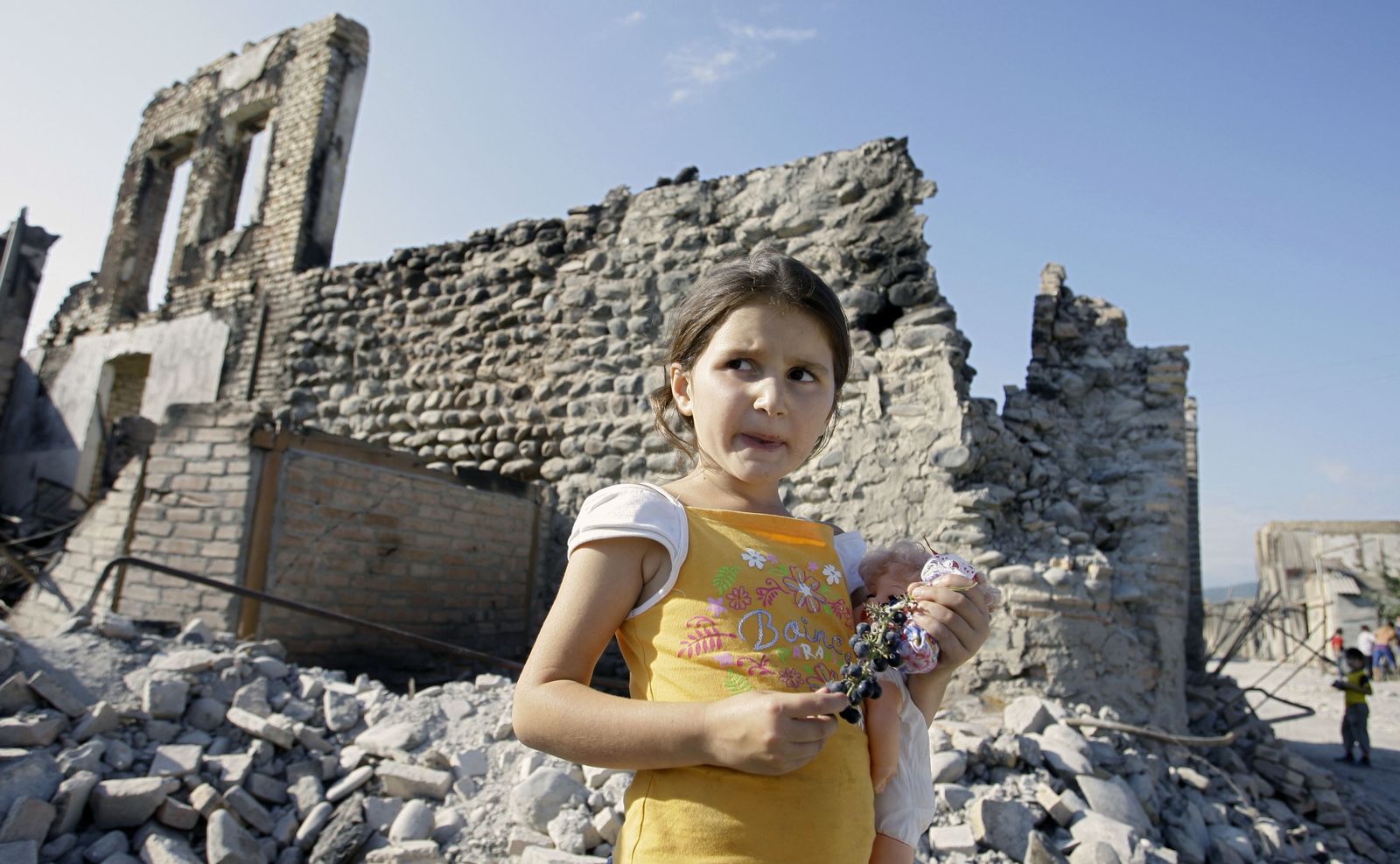 In this Sept. 4, 2008 photo, a girl plays near a ruined building in Tskhinvali.