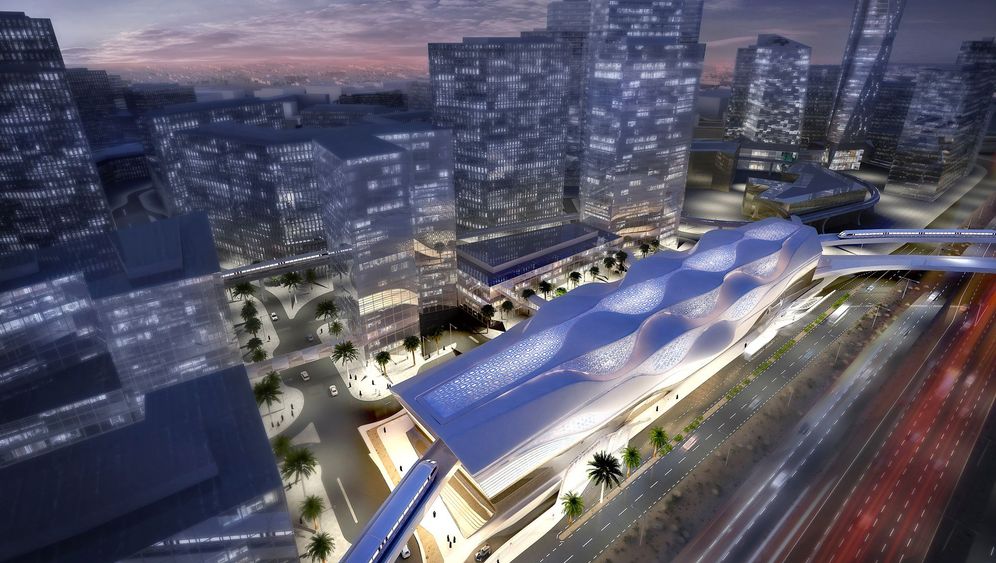 Photo Gallery: The Revolutionary Potential of the Riyadh Metro

Ibrahim Sultan, a 56-year-old engineer, is president of the Arriyadh Development Authority. As such, he says he wants to undo urban planning mistakes that led to the disappearance of public life not only in Riyadh but in the whole of Saudi Arabia. A strategic master plan is now being rolled out in the city, and the new Riyadh Metro is its pièce de résistance.

Sultan's office is housed in a brick building in the style of an historical Bedouin fortress in the middle of the Saudi capital's new diplomatic district. Sun shines in through triangular windows much like castle crenels. Plans for the new Riyadh adorn his office wall: It features students in well-appointed train compartments on their way to King Saud University and businesspeople heading towards the city center from the airport. The futuristic central station, designed by architect Zaha Hadid, is all sparkling gold and marble, with evaporation coolers outside the station to ensure the public doesn't suffer in the heat.

The six metro lines -- both overground and underground -- fan out across the city like a spider's web, covering a total of 176 kilometers (109 miles). The plan is to construct them simultaneously, with diggers at work all over the dense concrete jungle of Riyadh. The construction of the city's metro is the biggest project of its kind in the world and set to cost €17 billion ($23 billion) -- almost one-third of the country's defense budget. German multinational engineering giant Siemens is helping to build two of the lines, one of which will run from the airport to Hadid's station and the city's new green belt. It is scheduled to be completed before the end of 2019.

In contrast, German engineers took 14 years to assemble the 1.8 kilometer subway line between the Brandenburg Gate and Central Station in Berlin. But nothing is hampering the construction process in Saudi Arabia -- no excavations, no public protests, no long-drawn struggle to procure buildings permits, no financial hiccups. Speed is of the essence. Eighty nine year old King Abdullah has no time to waste: when the Riyadh Metro opens, he wants to be there. It's one of his pet projects.

Riyadh urgently needs a metro line. The numbers speak for themselves, and Ibrahim Sultan knows them by heart. The city's residents spend an average of one hour and 54 minutes in traffic every day, driving at an average speed of 27 kilometers per hour. Business meetings rarely begin on time -- reduced traffic would make businesspeople far more productive. One in three Saudis is overweight and the country has one of the highest percentages of diabetes in the world.

Ibrahim Sultan knows why. "In Saudi Arabia, urban planning has completely failed over the past 50 years," he says. People used to walk over to a neighbor or the Souq Al-Haraj market for a Turkish coffee, he explains, but these days they only communicate by mobile phone and get around in their cars. They seldom get any exercise. The streets are empty and public squares are deserted. There are more six-lane highways than sidewalks. Saudis spend their entire lives moving between the air-conditioned interiors of their homes, their cars and the shopping mall.

That's why the new metro is designed not only to improve conditions in the inner city -- but to usher in social change. It could serve as a first step toward subtle progress in a country dominated by Wahhabism, an ultra-conservative branch of Sunni Islam, where women may not drive, seldom leave their homes alone and must always have full body cover and wear a veil when they do. The official ban on female drivers is a divisive issue in the major cities, and has already given rise to a modest protest movement.

To some extent, the Riyadh Metro could also be seen as a measure for preventing public anger from spiraling out of control and causing a revolution on par with the Arab Spring.

That's a lot to expect from a public transport system. And in fact, when it opens, women and children will not be traveling with men, but will have their own compartments. As anachronistic as that may seem, though, it marks progress nonetheless, says Sultan. He takes the issue of segregation of the sexes very seriously, and points out that the new metro will allow women to travel safely around the city on their own -- without escorts or controls.

And the progress doesn't have to stop there. One day, he says, there may even be unisex compartments. But change on that scale takes even longer than the construction of a metro system.