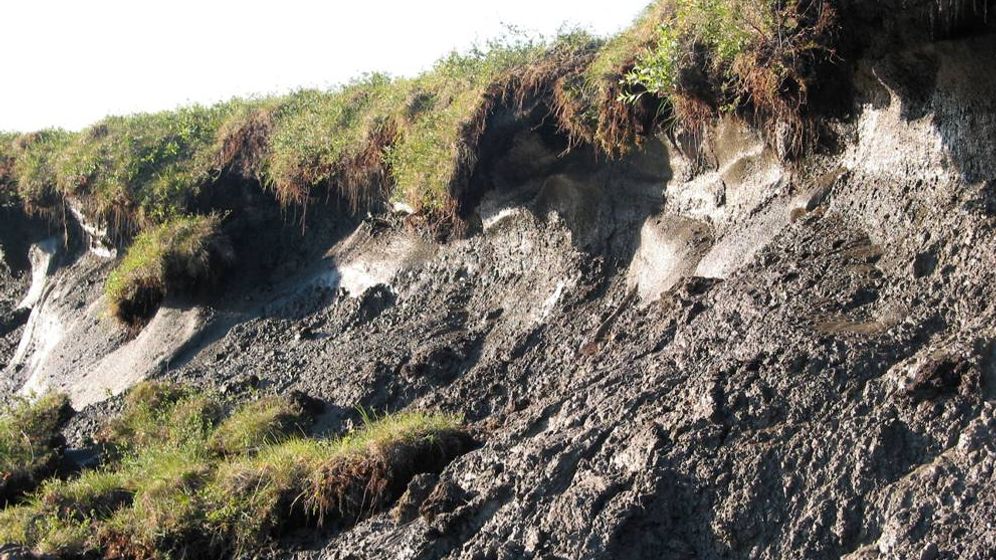 The frosty dungeon hides a dark secret. At least a quarter of the Northern Hemisphere's landmass is frozen and, like a vault, it holds 1,700 gigatonnes of carbon. This unimaginably high quantity of carbon comes from countless generations of creatures that have lived and died in the area over millions of years.

A portion of those dead plants and animals weren't decomposed by microorganisms because, at a certain point, it was simply too cold for that. But the permafrost is slowly melting. If large areas of ground underneath were to thaw one day, the bacterial decomposition process would pick up where it left off, releasing huge amounts of greenhouse gases. In total, permafrost contains twice as much carbon as what is currently billowing through the Earth's atmosphere.

If major portions of that carbon become released, the world's climate would suffer fatal consequences. For this reason, scientists have for some time now been asking the frightening question of just how strongly global warming affects permafrost areas. Using ingenious measuring methods, they are meticulously monitoring the fate of the planet. A new study, published in the professional journal Science on Thursday, suggests that it's possible that even slightly higher temperatures could thaw out significant portions of the region's permafrost areas.

A team of researchers led by Anton Vaks at the University of Oxford examined calcareous deposits from a total of six Siberian caves. Specifically, they looked at so called speleothems, which are mineral deposits -- including stalactites and stalagmites -- that form in limestone and other caves. "Speleothems only grow when rain and meltwater can seep through cracks into the caves," Vaks told SPIEGEL ONLINE. "And that process only occurs when temperatures are above the freezing point."

Since water from the frozen earth can't reach cracks deep within the caves, the mineral deposits are precise records of the climate. In warmer times, the so-called interglacial periods, stalactites and stalagmites form. In colder phases, so called glacial periods, they don't. So there is a pattern similar to how tree rings can be used to tell their age.

A total of 36 speleothems were dated using the uranium-thorium method. Over time, uranium decays into thorium. The uranium isotopes dissolve in water that penetrates into the speleothems, while thorium does not and thus remains in the deposits.

Researchers can look back about 500,000 years in the past using this method. Speleothems in today's permafrost areas must have come from a significantly warmer period in which water was flowing. Vaks and his colleagues have been able to show that stalactites in the northern-most Lenskaya Ledyanaya Cave only grew in a very warm part of an interglacial period about 400,000 years ago.

At that time, average temperatures were about 1.5 degrees Celsius higher than they are today. Traces of this particularly warm period were also proven with pollen deposits and residue of algae found in the sediment of Elgygytgyn Lake, in northeastern Siberia, as well as from other sources of evidence. During this time, there were probably even numerous trees in southern Greenland.

In periods with higher tempatures, the permafrost retreats further north. The Lenskaya Ledyanaya Cave lies at 40 degrees north latitude, in an area currently on the border of continuous permafrost. If the temperatures rise another one or two degrees, to approach something like what they were in the interglacial period 400,000 years ago, the situation would most likely look differently. "That is probably the threshold where continuous permafrost becomes vulnerable," says Vaks.

The research is "well-argued and conclusive, the data is great, and it's very diligent," says Hanno Meyer, at the Alfred Wegener Institute for Polar and Marine Research (AWI) in Potsdam, outside Berlin. It was the first time that speleothems have been used to prove the changing areas of southern permafrost borders, he says.

Meyer also said the is currently little information about older warm periods in this region. However, he adds, the research method used by the Oxford University team is not appropriate for other permafrost landscapes because these areas have been frozen for longer than 500,000 years and are therefore too old for the dating method to measure.

The frozen earth varies in thickness from a couple of meters to 1.5 kilometers, depending on the area. And a large portion of the permafrost areas lie farther north than Vaks and his team have studied until now, with pieces even in the ocean floor. So what does this newly released research now mean for these areas in the high Arctic? "We understand that we must go further to the North," admits Vaks. Over the next two years, Vaks and his team will look for more northern caves -- and for speleothems that can be dated.