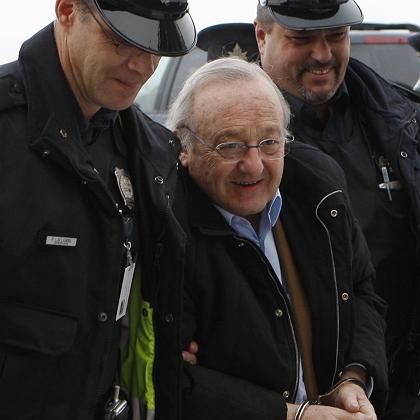 German-Canadian arms dealer and lobbyist Karlheinz Schreiber was released from Canadian custody on C$1.3 million (€860,000) bail on Tuesday, after he cooperated with Canadian authorities and testified before a parliamentary ethics committee about his dealings with former Canadian Prime Minister Brian Mulroney.

Schreiber, who has dual German-Canadian citizenship, is considered one of the central figures in the party donations scandal that brought down former German Chancellor Helmut Kohl. In Germany, he faces charges of bribery, tax evasion, fraud, accepting secret commissions and forging documents. He has been fighting an extradition order since 2004.

Schreiber's involvement in another scandal across the Atlantic looks like postponing any extradition to Germany for some time to come. The Canadian parliamentary ethics committee is investigating the C$300,000 in cash that Schreiber paid Mulroney in a series of instalments, starting in 1993. Schreiber testified before the committee that these dealings began on June 23, 1993, two days before Mulroney left office, at the then prime minister's summer home.

Mulroney, a Conservative who served as prime minister from 1984 to 1993, has acknowledged the payments, but claims they were used to help Schreiber set up a pasta business in Ontario and a light-armoured vehicle factory -- the "Bear Head Project" -- in Halifax. Mulroney is also to testify before the committee.

While Schreiber confirmed that he wanted Mulroney's help with the military vehicle project, he denied the pasta business story as well as widespread speculation that the payments were related to the purchase of Airbus jets by Air Canada during Mulroneys tenure, a sale Schreiber helped to broker.

Last Friday, the Ontario Court of Appeal, which granted his release on bail, temporarily stayed the extradition order until the Supreme Court of Canada decides whether it will hear an appeal in the case.