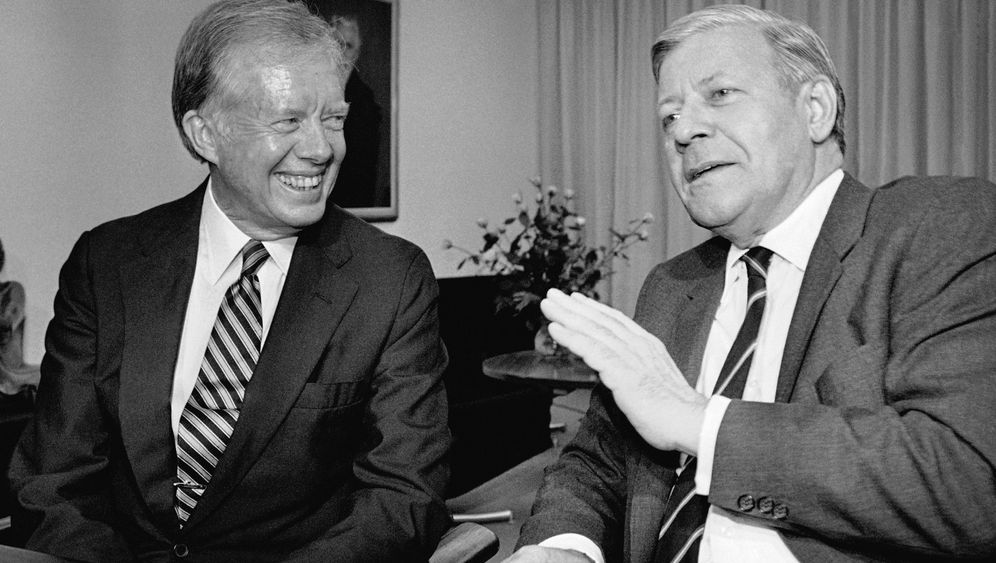 Helmut Schmidt was Germany's chancellor from 1974 to 1982, and Jimmy Carter was the president of the United States from 1977 to 1981. Though they have both grown older now, they are still as active as ever. Schmidt continues to deliver sharp-tongued, self-assured commentary on economic and political issues. And Carter has turned his attention to negotiating in the world's trouble spots. Such diplomatic efforts even earned him a Nobel Peace Prize in 2002.

But, as often happens between two larger-than-life figures, when the two talk about each other, they are both prone to a bit of one-upsmanship. Both of their memoirs reveal that the two politicians were anything but friends. But now Carter, 86, has gone a step further, publishing portions of the private diary he kept while president. And one of the things the book does is to settle an old score with Schmidt.

Carter's diary portrays the Hamburg-born politician, now 91, as a mercurial grouch, at one moment annoying his American colleagues with lectures on global economics, and then making himself scarce when the US needed his help. According to Carter's notes, Schmidt "acted like a paranoid child," and he was upset on several occasions by Schmidt's "unbelievable" behavior toward him. For example, in early 1978, Carter wrote: "Schmidt seems to go up and down in his psychological attitude. I guess women are not the only ones that have periods."

From Friend to Foe

At the beginning, Carter actually liked Schmidt. In 1973, when he was a still relatively unknown Democrat from the southern state of Georgia, Carter toured Europe. When he arrived in Germany, he was received by Schmidt, the then-finance minister of West Germany, who was already respected around the world.

But right after moving into the White House, Carter started asking West Germany's government -- then led by Schmidt -- to change its economic policies and, to a lesser extent, its foreign and energy policies, as well. Even if Carter did have some valid arguments on certain points, no head of state is ever happy to get those kinds of requests.

At official meetings, Schmidt remained friendly. When the cameras were on, the two leaders would smile and call each other "Jimmy" and "Helmut." But, later, when it was time to talk to journalists and others, Schmidt would pull no punches, saying that the new man in Washington was completely clueless.

Of course, it wasn't long before these things made their way back to the Oval Office. In a diary entry from July 7, 1977, Carter writes that Schmidt seems to be "quite volatile" and that he "goes up and down in his attitude toward us."

And that was just the beginning. In the years to follow, no matter what Carter did, he could count on Schmidt's criticism. A Carter security adviser eventually turned in exasperation to Hans-Dietrich Genscher, Germany's then-foreign minister. Genscher tried to assure the adviser that Schmidt was universally notorious for his sharp tongue and that he was just as abusive toward members of his own cabinet. Be that as it may, the adviser replied, Schmidt should remember that Carter was the president of the United States.

As Carter's diary reveals, even the CIA took notice and started letting the White House know whenever Schmidt made critical remarks. On several occasions, Carter advised those around him on how to best deal with "Schmidt's irrationality." And, at one point, one cabinet member even suggested that someone "go to Germany to try to get Schmidt to keep his mouth shut for a change." The diary does not reveal whether the suggestion was ever carried out.

Since Schmidt still enjoyed good standing in the American media, Carter's staff worried about the political fallout from the constant barrage of criticism coming from Bonn, the capital of West Germany. The White House even enlisted the help of a CIA psychologist to decipher Schmidt's behavior, and members of Carter's administration pondered whether Schmidt's so-called mood swings might actually be long-term effects of a thyroid condition.

From Bad to Worse

Still, there's another explanation for the animosity -- and a simpler one at that. Under Carter's predecessor, Gerald Ford, Schmidt had risen to become the de facto leader of the Western world. And when Carter tried to assume that mantle for himself, according to a long-time colleague of Schmidt's in the German cabinet, the self-confident German chancellor resented him for it. If fact, according to the former official, Schmidt believed that if life were only fair, he would have been president of the United States -- rather than Carter.

As time went on, Carter lost more and more respect for his know-it-all German counterpart. The diary contains frequent comments disparaging Schmidt, such as: "Schmidt lectured on economic matters and gave a history of Germany's great sacrifice to help other nations overcome their economic problems." Likewise, the two leaders started to clash more often in public. During the oil crisis, the two argued over energy-saving measures at a G-8 summit in Tokyo. "The first day of the economic summit was one of the worst days of my diplomatic life," says Carter's diary entry from June 28, 1979. "Schmidt got personally abusive toward me."

From Carter's point of view, one disappointment followed another. When Iranian radicals occupied the American Embassy in Tehran and took several dozen Americans hostage, the United States imposed sanctions and expected its allies to follow suit. But, for a long time, Bonn declined to do so. And when it came to the Soviet Union, the two countries couldn't reach a common position either. As Carter noted in his diary on January 5, 1979: "I was impressed and concerned by the attitude of Helmut toward appeasing the Soviets."

Of course, to claim that Schmidt wanted to appease the Soviet Union is absurd. Still, it's only fair to mention that, according to the diary, none other than Henry Kissinger -- who continues to be a friend of Schmidt's to this day -- reproached the chancellor for his neutrality, and he told Carter as much.

In 1980, this ongoing feud ended when Carter lost the presidential election to Ronald Reagan. According to Carter, one of the few positive sides to his loss was the fact that he would no longer have to deal with Schmidt. In his diary, he noted that he was "glad to deliver Schmidt… to Reagan."