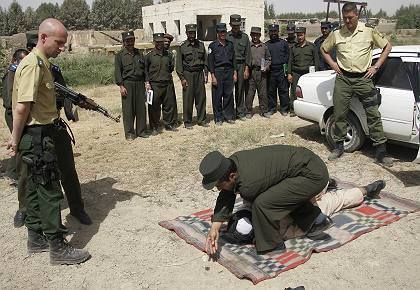 A police mission in Afghanistan approved in May by German Foreign Minister Frank-Walter Steinmeier and his European Union colleagues is off to a very slow start, according to information obtained by SPIEGEL. Most of the 160 police officers and legal experts have been in the country since June. They are there working under the command of Friedrich Eichele, a former commander of the German Federal Police's counter-terrorism unit, to provide training to police and border guards. So far, though, they have had little to do.

The problem is that the Kabul government has not yet appointed any participants for the planned training courses. Many of the officials, who among other things are supposed to train senior management of the criminal investigation police and drug investigators, are making themselves useful in the meantime as "mentors" for already trained police officers . But it still remains unclear how the NATO-led ISAF troops are going to provide protection for the trainers, who are scattered throughout the country.

Because of the ongoing dispute over Cyprus, NATO member Turkey is blocking an agreement to regulate the cooperation between NATO and the EU in Afghanistan. Turkey has tried to curb military cooperation between the EU and NATO because Brussels has refused to guarantee that Cypriot officers would not participate.

One of the basic problems in the training of domestic police and soldiers also remains unresolved: Immediately after the course, many of the armed personnel join the Taliban, local militia leaders or drug barons, because they pay much better than the government in Kabul.

Trainers from more than 20 nations are participating in the operation, and Germany alone has promised up to 60 officials. Because the federal and state governments cannot offer enough police officers, for the time being Germany's military, the Bundeswehr, is helping out with 35 military police.

With some of its efforts falling short, the German government is considering ramping up its efforts to train police and soldiers. Chancellor Angela Merkel is currently investigating areas where more could be done, and she has not ruled out the possibility of increasing the number of German troops.

For his part, Foreign Minister Steinmeier has called for an expansion of training efforts, but he has not said whether this would involve sending additional troops. And German Defense Minister Franz Josef Jung has also said he would like to expand training efforts, though he does not want to send more troops.

About 3,000 German troops are currently stationed in Afghanistan, but only 186 are actively training Afghan soldiers, according to the Süddeutsche Zeitung newspaper. Last year, the Bundeswehr spent €500 million ($682.7 million) on its Afghanistan deployment, but only €6 million has been spent since 2003 on training for the Afghan army.