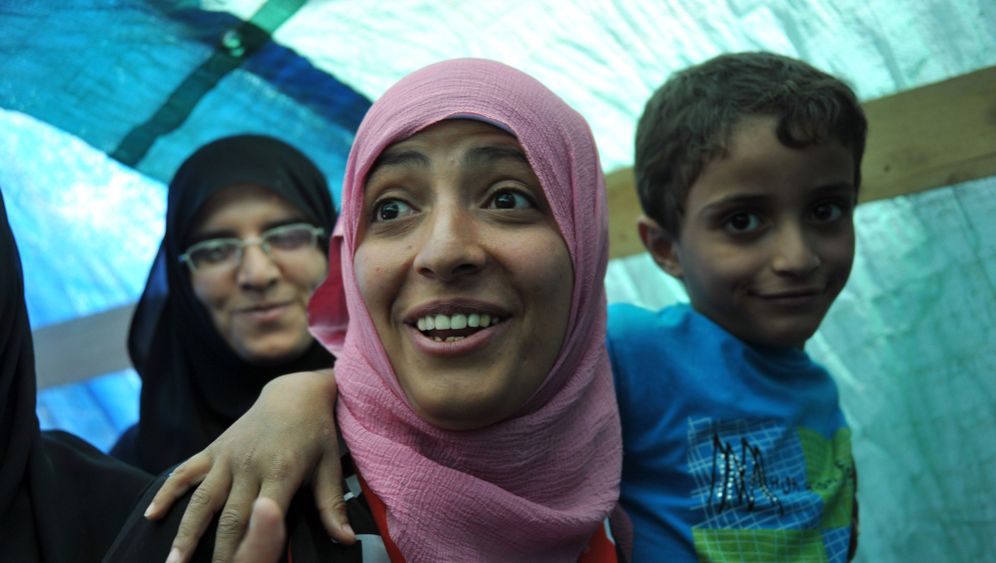 SPIEGEL: Were you expecting to be awarded the Nobel Prize for peace?

Karman: I was completely surprised. I see it as a tribute to all Arab revolutionaries, whether we live in Tunis, Cairo, Damascus or Tripoli.

SPIEGEL: With the help of your group Women Journalists Without Chains, you played an important role in organizing the mass demonstrations in Sanaa. Do you not think that the Arab world uprisings have significantly differing aims?

Karman: We all share a common denominator: the overthrow of our oppressors and their regimes, and the establishment of true democracy. The peace prize will accelerate the victory of our revolution.

Karman: He won't last much longer. It is foreign meddling which has hampered us.

SPIEGEL: What exactly do you mean by that?

Karman: I mean those governments who seek to hinder more radical solutions with so-called negotiations.

SPIEGEL: Once Saleh is gone, will the new Yemen be an Islamist state?

Karman: We want to create a modern civil society which is open to the world and oriented toward the future.

SPIEGEL: What role will Islam play? You yourself are a member of an Islamist party.

Karman: We envision a system similar to that in Turkey.

SPIEGEL: Yemen suffers from the presence of terrorists belonging to al-Qaida. How do you foresee solving this problem?

Karman: Once Saleh has lost power, they will disappear.