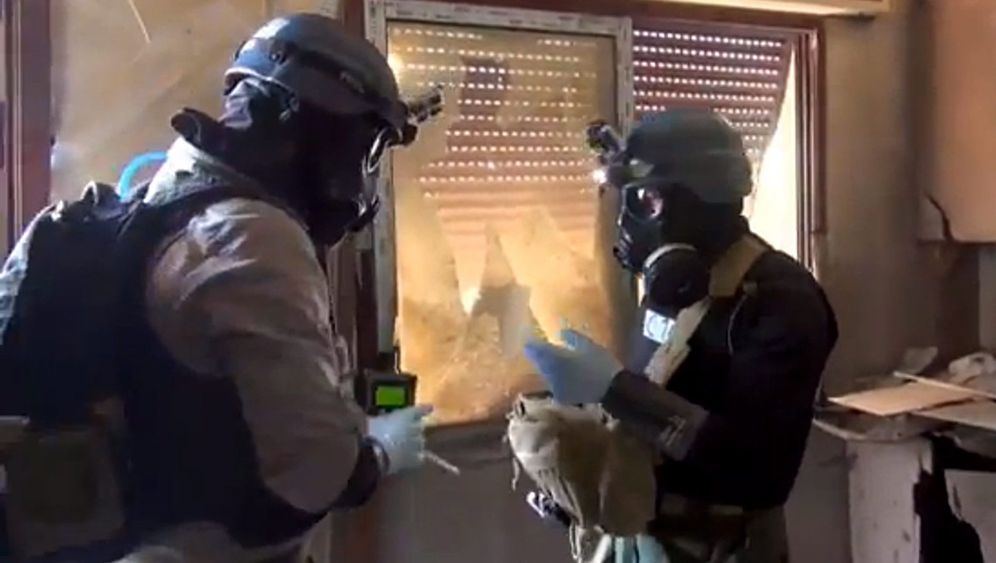 At the end of World War II, the victorious powers dumped copious quantities of German chemical weapons into the Baltic Sea. Today, such deadly arsenals are disposed of more professionally with the help of the Organization for the Prohibition of Chemical Weapons (OPCW), which was awarded the Nobel Peace Prize on Friday for its successful work.

Reaction to the award was positive, with world leaders expressing their support for the elimination of chemical weapons, particularly in Syria as the civil war there wears on. The honor is "well-deserved," said German Foreign Minister Guido Westerwelle. "Especially now, the OPCW is making a huge contribution to the inspection and destruction of chemical weapons in Syria," he added.

European Commission President Jose Manuel Barroso underlined the European Union's support for the elimination of chemical weapons, invoking the suffering they caused during World War I. "Syria now demonstrates that these abhorrent acts are still not eradicated from human behavior," he said, calling the OPCW's task there "an unprecedented challenge."

Specifically citing the alleged use of chemical weapons by the Syrian regime on Aug. 21, French President François Hollande said "such acts of barbarity should never be allowed to happen again, and offered France's full support of the OPCW's "vital mission."

The Hague-based agency, which is affiliated with the United Nations, was founded in 1997 after decades of difficult negotiations led to the establishment of the Chemical Weapons Convention that prohibits their use. The OPCW is tasked with monitoring compliance. Since then, 190 countries have signed the agreement. That list now includes Syria, which officially enters into the agreement on Oct. 14. Six nations have yet to ratify the agreement, including North Korea, Angola, Egypt, Israel and Burma -- with the last two claiming observer status, which allows them to participate in the organization's activities.

The OPCW does its job efficiently and inconspicuously, and as of July 2013 had helped dispose of some 58,000 tons of chemical weapons in Albania, South Korea, the United States, Russia, India, Libya and Iraq. That's four-fifths of the stockpiles claimed by member states. Achieving the goal of a world without chemical weapons is within reach, United Nations Secretary-General Ban Ki Moon said early this year.

Now, thanks to the civil war in Syria, the organization's inspectors are in the spotlight, and the US has made the success of their work a condition for refraining from air strikes on military sites under President Bashar Assad's control.

Inspectors won't be able to stop the gruesome deaths of Syrians, but they could secure and destroy the lion's share of Assad's chemical weapons arsenal, thereby preventing non-state actors such as Lebanon's Hezbollah or terrorists from acquiring them. That scenario is the biggest concern of the West when it comes to the conflict in Syria, though so far the chemical weapons have remained under the control of Assad's regime.

But the inspectors have their work cut out for them. The job in Syria is bigger than it was in Iraq, the only country to dispose of its chemical weapons arsenal against its will in response to international pressure.

The project in Syria means that OPCW headquarters is working around the clock. About a hundred weapons inspectors are set to be deployed -- nearly every single professional that the organization has at its disposal. Their enormous task is to destroy what is probably the largest chemical weapons arsenal in the Middle East by mid-2014 -- as a civil war rages around them.

The organization has set itself a schedule for the project. Between now and Nov. 1, it plans to destroy all of Syria's chemical weapons manufacturing plants. This is likely to be the easiest part of the operation: The organization must simply render the plants inoperable, and either fill them with cement or raze them to the ground. Destroying the chemical weapons themselves is likely to be more difficult, though.

One thing that could work in the OPCW's favor is that many of the chemical weapons are not immediately useable. In many cases, they are still stored as separate components. The raw materials are easier to transport and to destroy. Ahmet Üzümcü, the Turkish diplomat who is in charge of the OPCW, is optimistic: The fact that several weapons systems have already been destroyed is cause to believe that the mammoth task can be achieved -- if everyone works together, that is.

The Syrian regime has been cooperating with inspections thus far. It remains unclear, however, whether he will provide access to the country's entire weapons arsenal. The inspectors will also have to investigate weapons depots situated in areas that have fallen into the hands of rebel groups -- and the question of who will ensure their security there has not been addressed.

But the OPCW has already passed an acid test in Syria. After months of waiting for the Syrian regime to allow them into the country, the inspectors were finally in the right place at the right time. Five days after Syrian activists reported the large-scale chemical weapons attack outside Damascus on Aug. 21, the organization was able to gain entry. The subsequent OPCW report, which caused a significant stir around the world, included details of the rockets' flight paths. They led straight to Assad's elite military guard.