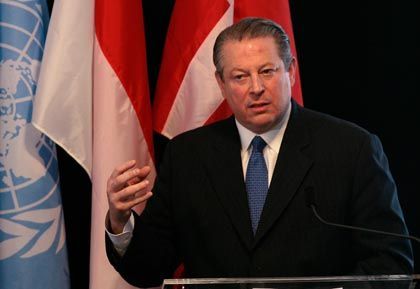 Acclaim from some quarters and venemous protests from others: Al Gore's Nobel Peace Prize has unleashed a massive wave of reactions.

Steve Doocy has a question for his viewers. "What do Al Gore, Yassir Arafat and that crazy Jimmy Carter all have in common?" crows the morning host of the American cable channel Fox News. His co-hosts look at him eagerly, half-emptied coffee cups in reach. Doocy waits a beat before answering his own question with a smug yet nauseated smile. "The Nobel Peace Prize."

And so it went, all day and not only on the conservative Fox News. The Nobel Peace Prize for former Vice President Al Gore and the UN's Intergovernmental Panel on Climate Change (IPCC) created mixed emotions in the US. There was widespread acclaim, and even the White House offered a belabored compliment: "Of course we're happy that Vice President Gore and the IPCC are receiving this recognition," said deputy press secretary Tony Fratto. Yet there was just as much venomous protest from Gore's adversaries and the usual climate crisis deniers.

Take Marlo Lewis, the "global warming expert" of the Competitive Enterprise Institute, who likes to write commentaries in defense of the oil industry. Gore is a "scaremonger," Lewis charged on CNN, calling Gore's documentary "An Inconvenient Truth," among other things, "exaggerated in many cases," "manipulative," and "misleading." All this talk about climate change only diverted "the public attention, the political will and potentially trillions of dollars" from more important problems, such as AIDS.

The Altar of "Political Correctness"

That wasn't the only broadside. Not one US news report, not one reaction here failed to mention that a British judge had found some factual inaccuracies in "An Inconvenient Truth." Yet rarely did those critics add that the same judge, High Court Judge Michael Burton, had ruled that the film had been "substantially founded upon scientific research and fact."

Thus, the Nobel committee's decision had something of a paradoxical effect: Instead of assuaging the climate debate in the US, it just stirred it up further -- and even louder than before.

All this just goes to show that, in the US, climate change and man's role in it is still a hot-button issue, far from the common sense that it is in Europe. Here, it's not a moral issue but still a partisan question. Bowing before the altar of "political correctness," every pro and con is discussed with equal weight, despite the facts -- a phenomenon similar to the religiously tainted "debate" over evolution and "intelligent design." Every voice pointing out the human factor in global warming, it seems, must be balanced with one denying it for good measure.

Meanwhile, the pendulum of public opinion has long swung to Gore and the climate warriors. When CNN asked in a poll today if Gore deserved the Nobel Peace Price, 68 percent of the participants said yes. Meanwhile, a recent Stanford University poll found that only 20 percent of those surveyed agreed with Bush's environmental policies.

A Late Prize for the 'Ozone Man'

Still, the conservative blogs in the US heaped righteous indignation and derision on Gore and the Nobel committee. "Just when you thought Al Gore's head couldn't get any bigger," mocked blogger Michelle Malkin, alongside a decidedly unfavorable photo of Gore with his cheeks and neck all blown up. "Look on the bright side," wrote Allahpundit, "after Arafat, Carter, and Iranian marionette Mohammed ElBaradei, the award couldn't possibly be more degraded."

"Thanks to Al Gore, polar bears will no longer be drowning, therefore free to continue to kill and maim any humans that come into contact with them, therefore contributing to world peace," wrote blogger Cassy Fiano, calling Gore the "Indiana Jones of the Climate Change Movement." "Fausta's Blog" suggested that Gore next put on a one-man Broadway show so he could add a Tony Award to his Oscar and Emmy. And "Redstate" reminded its readers that Hitler and Stalin once had also been nominated for a Nobel Peace Prize.

Seems that not much has changed in these realms since George H.W. Bush lampooned Gore, then a vice presidential candidate, as the "Ozone Man," back in 1992. "This guy is so far out in the environmental extreme we'll be up to our necks in owls and outta work for every American," Bush crooned during the election campaign that year (which he lost). His son George W. Bush sounded just the same before the elections of 2000 (which he won, with a helping of the Supreme Court). Gore "likes electric cars. He just doesn't like making electricity," he said.

By then Gore had been an environmental activist for a long time, but kept that yet unpopular issue hidden under a bushel during his campaign, on misguided advice from his strategists. Those were different times. Bush bragged that he had never read Gore's first climate book "Earth in the Balance," which was published in 1992. He preferred "State of Fear" by sci-fi author Michael Crichton ("Jurassic Park"), which portrays global warming as a hoax. Bush liked it so much, he invited Crichton to the White House.

"The Country Needs a Good President"

Even today, Bush still wobbles around the climate question all the while acting as Earth's savior with public displays of environmentalism. Two weeks ago he held his own climate conference, as if to rebuke the big UN climate summit in New York City that same week. Experts weren't much impressed by that show. "I would really be hard-pressed to give this administration credit for anything but words," Peter Goldmark, director of the climate and air program for Environmental Defense, said in an interview with SPIEGEL ONLINE. "Even in areas where they promised change -- such as the 'technological revolution' that Secretary of State Condoleezza Rice highlighted again in her speech at the United Nations this week -- the words far exceed the action."

Which led to an interesting exchange of words at Friday's press gaggle by White House spokesman Tony Fratto aboard Air Force One. A reporter asked Fratto if the Nobel Prize would "place pressure" on Bush "to maybe fall into line with what other countries want, which are mandatory caps on emissions." Fratto's reply was as curt as could be: "No."

Meanwhile, Nobel committee Chairman Ole Danbolt Mjoes rejected allegations that the prize was a political rebuke for Bush. The committee, he claimed, "has never given a kick in the leg to anyone." Unfortunate, it was a poor choice of words: When the 2002 prize went to former president Jimmy Carter, the committee head at the time, Gunnar Berge, called it a exactly that -- "a kick in the legs" to the US administration over its preparations to invade Iraq. The Bush-friendly blogs didn't waste any time to point that out.

Gore's supporters, however, were besides themselves with joy. For them the Nobel Prize is their last hope in pushing their hero towards entering the race for the White House once again. The Web site of the activist movement "Draft Gore," one of a dozen initiatives, on Friday counted thousands of new signatures for a petition urging Gore to run. Last count at midday: 187,080. "The country needs a good president," wrote one of the petitioners, Daniel Espino from Florida. "It is time to correct the injustice of an improperly appointed 'president'," added Charles Randall. Ryan Cacolici limited his entry to three letters: "SOS."

What agitated the Gore fans was not only their unresolved anger over the loss of the election in 2000, but also the desire for a breath of fresh air in the already stale campaign for 2008. Gore "is the conscience of the Democratic Party," the organizers of "Draft Gore" wrote -- "eloquent, passionate, relentless, undaunted."

Still, hopes for his running will probably remain pipe dreams. It is too late to enter the campaign for the primaries, with the first ones less than three months away. Also, Gore has long hovered far above the swamp of a mudslinging election campaign, and now more so than ever before.

And so it was that Gore, who received the news in San Francisco campaigning for Senator Barbara Boxer, continued to leave all calls for satisfaction for 2000 unheeded. He declared himself "deeply honored," and promptly donated his share of the award money -- $1.5 million altogether -- to Climate Protection, an organization of which he is chairman of the board. "He has no plans to run in 2008," his spokesperson Kalee Kreider repeated.

No plans, at least not for the presidency. But there's another office which was brought up Friday: Could Al Gore become the first-ever American secretary general of the UN?