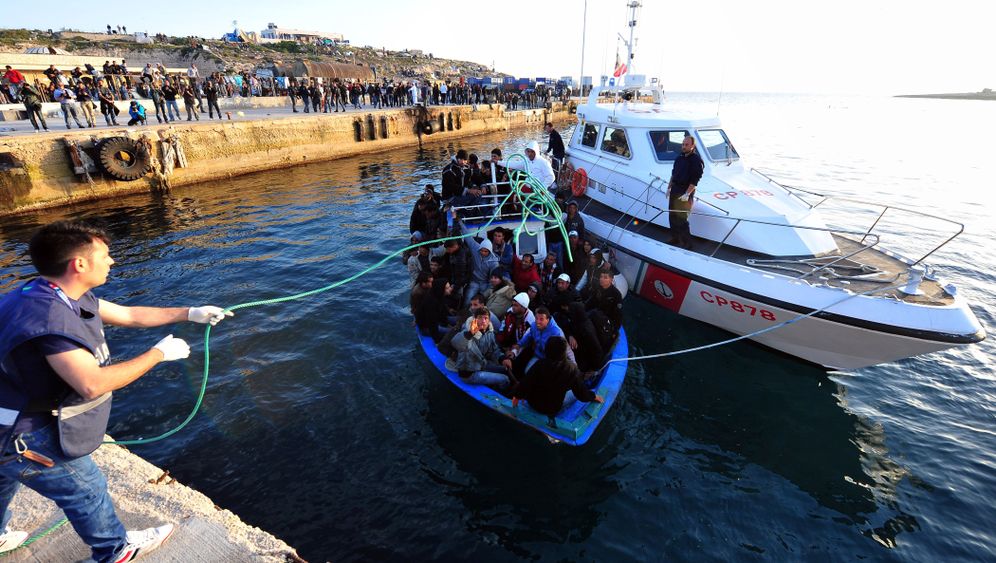 The tiny Italian island of Lampedusa has filled with North African migrants since the first wave of Arab street protests toppled the Tunisian government in January.

Since Sunday, though, an estimated 2,000 more people have arrived, including the first boatloads of Libyan refugees. Three vessels loaded with a total of 800 people from Libya -- including people originally from Somalia, Eritrea and Ethiopia -- landed on the smaller island of Linosa on Sunday morning. One woman gave birth on the way over and was flown to Lampedusa for help.

Lampedusa lies about 260 kilometers (161 miles) east of Tunisia and counts as one of the nearest bits of European territory to Africa. Even before the unrest it was a destination for African migrants in search of jobs in the West.

But numbers have swollen in recent weeks. Now, the total number of migrants waiting for processing by Italian officials is estimated at more than 7,000.

People lack water, sanitary conditions have deteriorated, and there were reports of hunger strikes among Tunisians on Monday. According to the Rome office of Save the Children, the situation has grown catastrophic. But Michele Prosperi, a spokesman for the group, said Tuesday that the Italian government had prepared tent cities to process the migrants in 10 different locations on the mainland.

"There are six big boats ready to move most of the people to Italy," he told SPIEGEL ONLINE. "People from Tunisia are not considered refugees (by the government), because Tunisia is not in crisis. With people from Libya, of course, the situation is different," because they're fleeing a war zone, he said.

Most of those who have landed on Lampedusa in recent weeks have come from Tunisia, many of them having left even after the country's leadership stepped aside in January, complaining about a lack of jobs. A sizeable number of them have been sent back.

Lampedusa is meant to be a waystation. But its facilities -- built for 800 people -- have been overwhelmed. The Tunisians who called a hunger strike Monday reportedly were protesting sanitary conditions in a tent camp as well as long waits for meals. They demanded transportation to the mainland.

The wave of migrants has sparked fierce debate in Italy, and on Monday some local Lampedusa women chained themselves to a dock to prevent new boats from landing, according to AFP. They blamed the immigrants for recent crimes on the island.

"The government does nothing, and we don't feel safe with all these people coming and going everywhere," said a local plumber named Emanuele, who wouldn't give his full name to AFP.

In February, Italy's conservative interior minister, Roberto Maroni, warned of "a Biblical exodus" from Libya. He belongs to Italy's anti-immigrant Northern League, and he's tried to convince more nations in the European Union to absorb the North Africans. But Christopher Hein, director of the Italian Refugee Council, accused Maroni of exploiting the poor conditions on Lampedusa to pressure EU member states.

"The chaos (on Lampedusa) has been artificially enhanced," he told SPIEGEL ONLINE.

Maroni made a financial deal with Libyan leader Moammar Gadhafi in mid-2010 to manage the number of migrants crossing to Europe. Because of Libya's size, and the number of guest workers it attracted from other parts of Africa, Gadhafi was able to establish himself as a sort of gatekeeper. Even before the unrest in February, he resorted to language about immigrants that echoed the Northern League.

In December, for example, he said that unless the EU gave him the support he wanted, "Europe will become black."

Maroni's comment in February about a Biblical exodus accompanied a prediction that "200,000 to 300,000" Africans would flow across the Mediterranean if the Libyan government fell.

So far, since January, a total of 16,000 North African migrants have landed at Lampedusa.