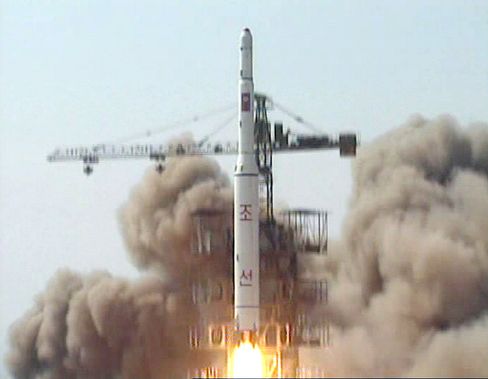 A North Korean rocket test in April provoked a crisis, with the international community accusing the rogue nation of developing nuclear missiles. A recent nuclear test has caused even more concern.

North Korea's leader seems to have been working overtime in recent weeks. Kim Jong-Il didn't just visit Air Base 814, where he told pilots to be "heroes in the holy struggle to defend our fatherland" to great applause. He also visited two mines in the Hamyong province, and a historic battlefield where a slim beauty in uniform gave him a tour.

In the weeks before, he visited a steel mill, a dam and inspected a new swimming pool in Pyongyang surrounded by adoring officers and functionaries carrying notebooks to capture his "spontaneous guidance."

At the same time, thousands of kilometers away on the other side of the Pacific, a horrible thought was growing in US Admiral Michael Mullen's head. Perhaps, the Armed Forces Chief of Staff thought, Kim Jong Il was preparing for another atomic weapons test. Mullen's hunch, gathered from classified information, turned out to be correct.

The report from Pyongyang's official news agency, KCNA, came out on Monday: After their first attempt in 2006, the North Korean military detonated another bomb, "stronger in its explosive power and control technology," near the city of Kilju.

With that, the "Dear Leader's" regime stepped closer to a showdown with the rest of the world. Reprimands from the UN Security Council and further sanctions are in store. To Kim and his generals, it makes little difference.

The North Koreans claimed they only wanted to launch a communications satellite. America and North Korea's neighbors insist that's a lie -- Kim was testing a long-range missile that he could mount a nuclear warhead on at some point. At any rate, there won't be any satellites any time soon -- the launch splashed down -- with or without the communications gear -- in the Pacific.

After worldwide criticism, the regime quit the Beijing six-party talks whose goal had been a nuclear-free Korean peninsula. Pyongyang officials threatened never to return to the bargaining table. They demanded an apology from the US, which they claimed was attacking North Korea's "autonomy."

In fact, North Korea feels it has been deceived by all sides. After Pyongyang agreed last year to mothball one of its nuclear reactors and even blew up one of its cooling towers, officials argue, their counterparts failed to hold up their end of the deal.

What angers Pyongyang most is that the Americans have suddenly insisted on more intensive inspections and only hesitantly taken North Korea off the list of nations sponsoring terrorism. And the new American president, Barack Obama, is turning out to be less friendly than expected.

A cold wind is now blowing in East Asia, the unification of the two Koreas seems further off than ever and the world is still light years away from nuclear disarmament. The situation has rarely been as unclear is it is now. Pyongyang has even closed the economic cooperation zone it recently established with South Korea. And what, the world is asking now, happens to the nuclear bombs when North Korea's regime collapses some day?

The North Koreans learned how to build bombs from the Soviets, who also educated the Pakistanis. Now, the US and Israel are accusing the North Koreans of teaching Iran their skills.

In North Korea, there are lots of officials who were removed from their posts for being too quick to warm to the South's "Sunshine Politics." Conservative cadres want the private markets that have sprung up across the country eliminated. That means the hardliners from the North Korean military have the upper hand right now.

They see confrontation and provocation as the only chance to prop up the regime and their own benefits. "There are legitimate concerns being raised about the internal stability of North Korea, given Kim Jong Il's health problems, uncertainty about succession, the weak economy and the persistent food shortages," Leon Panetta, the new head of the CIA, said recently.

In a weak position like this, where it's being pressured from all sides, the regime has to rattle its saber a bit. That Kim would choose to set off the bomb now makes perfect sense. Kim's no longer acting erratically -- these moves are ice-cold and calculated measures to outmaneuver his opponents.

At the same time, Kim believes he can use the bomb to force the US president to reverse his adversarial position. The generalissimo wants an end to the Korean War (right now there's just a truce), full diplomatic relations with Washington and the removal of US troops from South Korea.

He'll use the negotiations to get as much as he can -- including the money, resources and power plants he needs to prop up his country's faltering economy.

More important, North Korea experts say, is international recognition. He wants the Americans to treat him as an equal, as a worthy partner, as an important statesman.

He'll want to meet with Hillary Clinton in Pyongyang next, and then who knows -- maybe even President Obama himself.

Kim wants to play the role of peacemaker, like his father, the eternal leader. Until then, he'll keep working on bombs.