He was the last heir to the throne of the Ottoman Empire, a major power that controlled large parts of Europe, North Africa and the Middle East for centuries. But Prince Osman Ertugrul Osmanoglu was a prince without a country, and he was stateless for much of his life. When Turkish officers proclaimed the republic in 1924, they expelled Osmanoglu and his entire family. It wasn't until 2004 that the exiled prince was granted Turkish citizenship.

The prince died in Istanbul on Sept. 23, at the age of 97, and the republic that had once banished him became reconciled with Osmanoglu. The guests at the funeral service included four cabinet ministers from the conservative Islamic AKP government, a deputy minister, several members of parliament, Istanbul's governor and the city's chief of police. Prime Minister Recep Tayyip Erdogan also sent his condolences -- privately. It was a rare show of republican appreciation for Turkey's Ottoman legacy.

Many Turks today believe that true greatness lies in the imperial past -- and that this past is no longer to be found exclusively in the West. Europe, with its fondness for criticizing Turkey, is increasingly become yesterday's ideal. "Neo-Ottomanism" is in vogue in Turkey, as evidenced by an exhibition at a new history museum that opened in Istanbul at the beginning of the year, a museum commission by Erdogan when he was still the mayor of Istanbul. An enormous panorama painting at the museum depicts the Ottoman conquest of Istanbul in 1453, complete with a soundtrack of cannon thunder and war cries piped through the loudspeakers.

This nostalgia for the Ottoman past is in keeping with an about-face in politics that is becoming increasingly obvious. Turkish politicians are now evoking -- and glorifying -- the Ottoman era as a time when their country was still a respected hegemonic power in the Middle East and Caucasus region. It is a role that Ankara wants to play again today -- perhaps one it is already playing.

Turkey has in fact turned its attention to the east once again, opening up channels of communication and embarking on an approach to diplomacy that goes beyond the usual friend vs. foe dichotomy. In short, Turkish Foreign Minister Ahmet Davutoglu hopes to solve the conflicts in the region with a "zero problems" policy. He intends to act as a mediator whenever possible, and he hopes that by the end of a reconciliation process with its neighbors, Turkey will emerge as the strongest nation in the Middle East, both economically and politically.

The initiatives have been coming hard and fast. In early October, the foreign ministers of Turkey and Armenia signed a protocol on the establishment of diplomatic relations. However, the two archenemies will have to first overcome substantial obstacles. Turkey's "brother" nation, Azerbaijan, is threatening to block the peace process unless Armenia relinquishes control over Nagorno-Karabakh, an ethnic Armenian enclave in Azerbaijan. Armenians living abroad, in particular, insist that Ankara must first recognize the Armenian genocide during World War I before the borders are opened. Despite these obstacles, Turkey and Armenia want to continue negotiating.

Ankara has also recently begun talks with another difficult neighbor. The de facto Kurdish state in northern Iraq -- a safe haven for Kurdistan Workers' Party (PKK) rebels and long the principal adversary of the Turkish military -- is worried about being left alone with Shiite and Sunni Arabs in a disintegrating Iraq. Instead, Iraq's Kurds have sought to establish ties with Turkey.

Two weeks ago, Davutoglu flew to Arbil, the capital of the Kurdish region, where he announced Turkey's plans to open a consulate. A journalist traveling with Davutoglu said she was astonished to see a Turkish foreign minister sitting in a limousine flying a Kurdish pennant, and that it upends everything that was official Turkish policy in the past.

So far, however, the neighbors with whom the Turks have formed their closest ties are the Syrians.

In mid-October, Syrian Foreign Minister Walid Moallem met Davutoglu and his large entourage at Oncupinar on the Turkish-Syrian border. The two men cheerfully pushed aside a barrier marking the border, in a scene meant to emulate the opening of the Hungarian-Austrian border in September 1989.

In the late 1990s, the two countries were still on the verge of war, because of Syria's support for the PKK extremists. Today their armed forces conduct joint maneuvers, while their foreign and defense ministers meet as part of a "strategic cooperation council." As journalist Zeynep Gurcanli wrote in the influential Turkish daily Hürriyet, Turkey has never cooperated this closely with any other country. Could Ankara's current efforts eventually lead to a "Middle Eastern Union" modeled after the European Union?

The end of the decades-long dispute between Turkey and Syria is seen as a true success for Davutoglu -- and for the Syrians, who are overjoyed at the upgrading of their country after being ostracized in the West. But Damascus is also pleased for another reason. At almost exactly the same time as the Turkish-Syria rapprochement was happening, Turkey's relations with another country suddenly went into a nosedive.

For "technical reasons," as the Turkish government initially claimed, Turkey decided to exclude Israel from its international military exercise "Anatolian Eagle." Erdogan later explained the real reasons for the decision: Ankara could not allow fighter jets that had also been used in missions against Palestinians in the Gaza Strip to fly over Turkish airspace. The Turks' decision to conduct joint military exercises with the Syrians while putting their often-cited "strategic partnership" with Israel on ice shows how deep the shift in Ankara's foreign policy already is.

It also reflects a domestic idiosyncrasy: Because the conservative Islamic AKP government has strengthened its positive relative to the secular military, it can now conduct a more self-confident foreign policy. It no longer needs to show so much respect for the Turkish-Israeli alliance, which in reality was always a project of the elite.

However, Ankara's spat with Israel had already begun before the Gaza war that so outraged the Turkish public. The army, too, is upset with Israel, says Haldun Solmazturk, a retired Turkish general, because there have been no reliable agreements with the Israelis for a long time, and because the Turks feel that the Israelis have treated them condescendingly.

The Israelis' Gaza offensive was the straw that broke the camel's back, triggering a display of displeasure with Israel from the Turkish side. During the World Economic Forum in Davos, Switzerland in early 2009, Erdogan vented his anger on Israeli President Shimon Peres. His rant brought him fresh popularity at home and in the Arab world, where he has since been called the "Conqueror of Davos."

Iranian President Mahmoud Ahmadinejad now considers the Turkish prime minister a good friend, and the feeling -- to the West's chagrin -- is mutual. The government in Tehran is being treated unfairly, Erdogan said before his most recent state visit to the Islamic Republic. The West, according to Erdogan, ought to give up its own nuclear weapons because threatening Iran with sanctions.

Western diplomats could hardly believe their ears. Was the only Muslim member of NATO siding with Tehran in the dispute over Iran's alleged nuclear ambitions? Wasn't this -- especially after Erdogan's anti-Israeli tirade -- even more evidence that Europe had in fact already lost Turkey, and that Ankara is looking to the east instead?

Erdogan's chief foreign policy adviser, Ibrahim Kalin, finds such charges peculiar. Even the West, he says, is not unfamiliar with the concept of pragmatic, interest-based politics. "When the Americans open up to Russia, it's hailed as a new era in diplomacy," he says. "But when Turkey opens up to Iran, people ask themselves whether we are changing our axis." Meanwhile, Ahmadinejad paid a second visit to Istanbul last Sunday, where he attended a summit of the Organization of the Islamic Conference (OIC).

Another summit guest, Sudanese President Omar al-Bashir, who has been condemned by the international community over war crimes in Darfur, did not attend, even though he had been expressly invited by the Turks. "A Muslim cannot commit genocide," Erdogan had earlier said, dumbfounding the West once again.

A Benefit for Europe

Turkish Minister for EU Affairs Egemen Bagis is nonetheless unwilling to concede that Turkey is turning away from the West. He insists that the successes of Ankara's diplomacy with the East should be seen as a benefit for Europe.

The West, says Bagis, consistently describes Turkey as a bridge between East and West. But how, he asks, can a bridge stand on only one strong pillar?

"The good news is that Turkey is not turning away from the West," says Burak Bekdil, a critic of Erdogan. "The bad news is that it isn't turning toward the West any more, either."

But should this come as a surprise? The French and Austrian governments are firmly opposed to Turkey's bid to join the EU. Meanwhile in Germany the majority of people are disillusioned with EU expansion.

In Germany's conservative Christian Democratic Union (CDU), the image of the bridge is even seen as an expression of distance. If it were to become a full-fledged EU member, says new Finance Minister Wolfgang Schäuble, Turkey could no longer perform the function of a bridge. After all, he said, a bridge doesn't belong to either side. 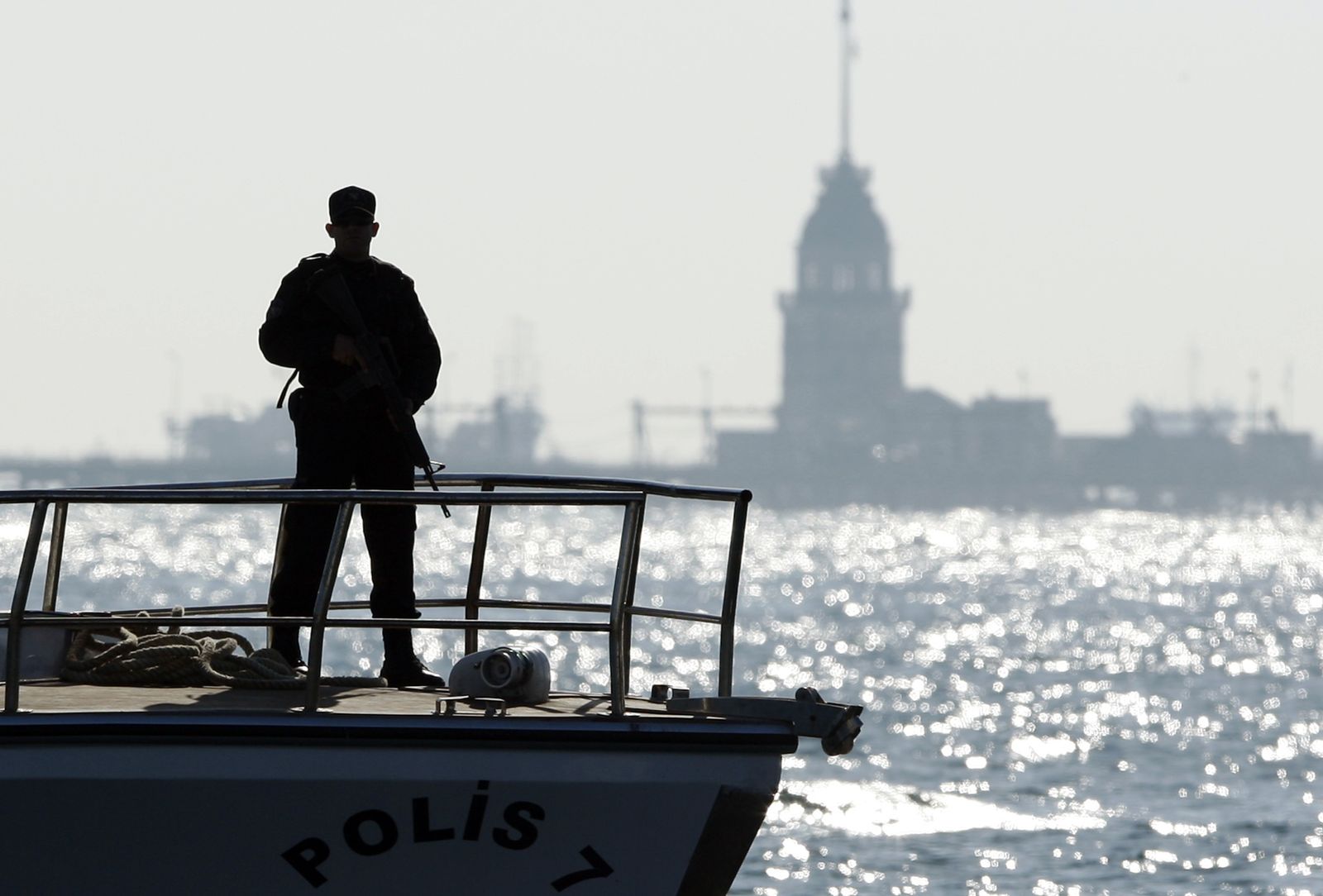 A Turkish policeman stands guard on a boat in the Bosphorus during the Organization of the Islamic Conference summit in Istanbul.