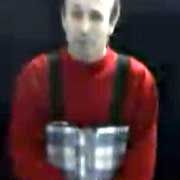 Alan Johnston as seen in the Internet video.

For a week in Gaza City, there was calm. The occasional car horn blared. The waves of the Mediterranean crashed on the shore. Every now and then the cry of a muezzin would pierce through the hum of everyday life. Until Sunday. Then, once again, volleys of machine gun fire hammered through the streets along with the dull thuds of grenade launchers and mortars.

A family feud was underway: the Deraui clan against the Dagmoush clan. Having lost two sons to their rivals, the Derauis were assaulting the Sabra neighborhood, where the Dagmoushes had dug in behind sandbags and barricades. But there was more to it than just that. The skirmishes were the prelude to the liberation-by-force of kidnapped BBC reporter Alan Johnston, who has been held by the Dagmoush-controlled Army of Islam for three months, according to people familiar with Gaza City.

It's an open secret in Gaza City that the Dagmoush clan -- called the "Sopranos of Gaza City," an allusion to the US television series -- is holding Johnston. Still, everyone who has something to say about the kidnapping prefers to remain anonymous: The clan's influence is too great for anyone to want to provoke its anger. Still a surprisingly detailed picture emerges from conversations with various sources. What results is the panorama of a strip of land fought over by rival clans -- the setting for dramas whose ruthlessness and brutality remind one of the Montague and Capulet families in Shakespeare's play "Romeo and Juliet."

Simply put, the Dagmoush operates in the best tradition of the cosa nostra. The family numbers some 2,500 members, making it one of the smaller clans in Gaza, where people can sometimes have as many as 5,000 or even 7,000 people in their extended families. What makes the Dagmoush clan so dangerous is its cohesion and enormous arsenal of weapons.

The members of the Dagmoush clan were ordinary and not especially wealthy people until the creation of the Palestinian Authority (PA) in 1994. They operated a donkey-cart delivery service, transporting food and building supplies through Gaza City. They smuggled cigarettes and drugs across the Egyptian border and into the Gaza Strip on the side. Their well-developed network of smugglers, coupled with close personal contacts to Fatah, eventually allowed them to enter the profitable arms trade. That was the foundation for their empire. Eventually the Dagmoush clan began making huge amounts of money in construction. A single clan member owns 20 of the most luxurious apartment blocks in Gaza City. "He's my landlord," says one source.

Mumtaz Dagmoush is the clan's godfather. He earned his credentials as a militia leader during the second Intifada, from 2000 onward, as the strategist of the Public Resistance Committee (PRC), half of which is close to Hamas. But he was not rewarded by Hamas when the time came to replace the PRC's slain leader.

That was when the disappointed leader created his own militia, the Army of Islam, with the blessing of Hamas, according to a source close to the Palestinian intelligence service. The militia is said to consist almost exclusively of Dagmoush clan members. It is also said to pursue criminal rather than religious or political goals. The Army of Islam made its first appearance with the kidnapping of Israeli soldier Gilad Shalit one year ago. The Army of Islam, Hamas and the PRC said at the time that they had planned and executed the kidnapping together.

The final split between Mumtaz Dagmoush and Hamas came a few weeks later, in August of 2006. Dagmoush's Army of Islam kidnapped two journalists from the US network Fox News. After a two-week hostage drama, the militia received a ransom of between $450,000 and $1.2 million, according to rumors. "It goes to show they're not pro-Islam: They're pro-dollar," says one source.

Hamas was eager to show that it could maintain law and order in Gaza -- but the Dagmoush clan caused it to lose face, according to the source. Mumtaz Dagmoush and his men had to steer clear of Hamas from then on. Tensions increased even further when the Dagmoush clan used force of arms to try and prevent Hamas from setting up a headquarters in a Dagmoush-controlled neighborhood. Two Dagmoush clan members were killed in the fighting -- and the clan quickly avenged them. Mu'zad Dagmoush, Mumtaz's brother, has been wanted for the murder of a Hamas fighter ever since. "There's not enough room in Gaza for both the Dagmoush clan and Hamas," says the source.

When Alan Johnston stepped out of the building in central Gaza City where the BBC and half a dozen other media are based on the afternoon of March 12, he was abducted before he could climb into his armored BBC vehicle. He was most likely taken to Sabra, a Dagmoush stronghold just south of the city center.

Johnston has been a kind of life insurance policy for the Dagmoush clan ever since. Hamas cannot afford the death of a foreign journalist in "Hamastan," which it has supposedly pacified, and Dagmoush has threatened to kill Johnston if attacked.

Local journalists in Gaza see the Army of Islam's demand for the release of an Islamic hate preacher close to al-Qaida, imprisoned in Britain, as little more than a pretext. "Maybe they were even paid by al-Qaida to formulate this demand," one journalist says.

It is much easier to see the handwriting of the clan in the other demands the clan has made, according to the source. "There are indications that they have demanded $5 million and a large piece of real estate from the former Jewish settlements on Gaza's Mediterranean coast," he says.

In the past few days, Hamas members have reported that their Islamic militia is in the process of tightening the noose around the Dagmoush stronghold. A battle is approaching, they say. The members of the Dagmoush clan know they have surrendered their right to live, Hamas sources say.

They are convinced the Dagmoush clan will not release the British journalist voluntarily. "When he's free, they're finished," one Hamas source says. Hamas is currently trying to discover Johnston's exact location -- by offering informants safety guarantees and money. They are hoping to avoid a bloodbath by means of a targeted operation to free the journalist. "They're trying to find the one who wants to save their skin," the Hamas source says.

Prelude to the Final Battle

The Deraui clan's attack on the Dagmoush clan is the prelude to the final battle, according to sources in Gaza City on Sunday. It is considered certain that the Deraui clan -- which has had a score to settle with its rival clan ever since two of its members were killed by Dagmoush men -- was sent ahead by Hamas in order to increase the pressure on the kidnappers.

The tactic seems to have had an effect -- but not the one hoped for. Instead of offering a cease-fire and releasing the BBC journalist, the clan has prepared for a showdown battle, which one of the two sides -- presumably the Dagmoush clan -- will not survive. The video released on Sunday evening, which shows a frightened Johnston wearing an alleged bomb belt, is a sign that the kidnappers are increasingly desperate.

The skirmishes had died down again on Monday morning, but nevertheless the hope of a peaceful solution is dwindling. "The positions on both sides are hardening. Hamas will never forgive the Dagmoush clan," says a source close to Hamas. The chances that Johnston will survive a violent liberation attempt are getting slimmer and slimmer. "The bomb belt shows the Dagmoush clan stops at nothing."