The wheat is lush and green in the fields of northern Afghanistan this spring. A river winding its way through the broad valley dotted with walled houses completes the picturesque scene. Behind one of these walls, not far from the town of Pol-e-Khomri, sits a man whose enemies, having named him a "target," would like to see dead. He is the Baghlan bomber.

The Taliban commander is regarded as a brutal extremist with excellent connections to terror cells across the border in Pakistan. Security officials consider him to be one of the most dangerous players in the region, which is under German command as part of NATO's International Security Assistance Force (ISAF) mission in Afghanistan. The military accuses him of laying roadside bombs and of sheltering suicide attackers prior to their bloody missions.

He is also thought to be behind one of the deadliest attacks in Afghanistan's history, the Nov. 6, 2007 attack on a sugar factory in the northwest province of Baghlan. The attack killed 79 people, including dozens of children and many parliamentarians and other politicians, as they celebrated the factory's reopening.

Germany's KSK special forces have been charged with capturing the terrorist, in cooperation with the Afghan secret service organization NDS and the Afghan army. The German elite soldiers were able to uncover the Taliban commander's location. They spent weeks studying his behavior and habits: when he left his house and with whom, how many men he had around him and what weapons they carried, the color of his turban and what vehicles he drove. 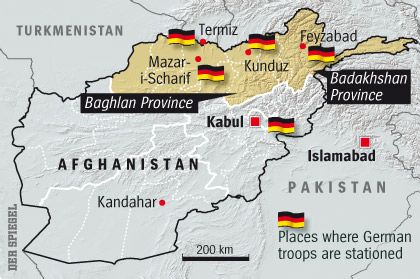 At the end of March, they decided to act to seize the commander. Under the protection of darkness, the KSK, together with Afghan forces, advanced toward their target. Wearing black and equipped with night-vision goggles, the team came within just a few hundred meters of their target before they were discovered by Taliban forces.

The dangerous terrorist escaped. It would, however, have been possible for the Germans to kill him -- but the KSK were not authorized to do so.

The threat to the international relief workers and the ISAF soldiers stationed in the north may now be even greater than it was before. Warned of ISAF's activities and intent on taking revenge, the man and his network are active once again. Over 2,500 Germans are stationed between Faryab and Badakhshan, along with Hungarian, Norwegian and Swedish troops.

The case has caused disquiet at the headquarters of the ISAF peacekeeping force in Kabul. The current strategy for fighting the enemy is to buy as many Taliban sympathizers as possible, to at least win them over for a while -- and to "eliminate" the hardliners through targeted assassinations.

From a military point of view, the so-called targeting has been a success. Close to one-third of the Taliban leaders, about 150 commanders, have since been "neutralized," meaning they are either dead or captured. Most of the capture-or-kill missions, as the operations are called in military jargon, are undertaken by British or American special forces.

But so far the Germans haven't wanted to take part. And that causes problems, because the insurgents are increasingly gaining influence in the nine provinces under German command.

And the extremists appear to be confident of victory. Maulawi Bashir Haqqani, 40, the Taliban's military commander in Kunduz, told SPIEGEL: "The Germans are the most important enemy in the north. If they leave their base, they will find booby traps and bombs waiting for them on every road. They will have to carry many more bodies in coffins on their shoulders if they don't come to the realistic conclusion that their forces must withdraw from our country."

Nonetheless, even in a time of growing threats in Afghanistan, Berlin is sticking to its "principle of proportionality," stressed one high-ranking official in the Defense Ministry. A fugitive like the Baghlan bomber is not an aggressor and should not be shot unless necessary, the official explains.

Soldiers from Britain's British Special Air Service or the US's Delta Force are less bothered about such hair-splitting. For them, this is a war in which it comes down to "kill or be killed," say sources in military circles in Kabul. The "targets" are identified, tracked down and -- often with the help of laser-guided weapons systems -- "eliminated."

The Germans have considerable misgivings about such an approach. They have secretly given "clarification notes" to NATO with far-ranging instructions for their soldiers which expressly contradict the usual procedures: "The use of lethal force is prohibited unless an attack is taking place or is imminent." Sources in NATO circles regard the confidential document as a "national exception," a caveat which places restrictions on operational capability. The Germans, for their part, always avoid using the word caveat, out of diplomatic considerations vis-à-vis their allies.

The most remarkable thing about the secret document is its stated justification. The German government considers its allies' approach as "not being in conformity with international law." Little wonder that NATO's mission in Afghanistan is marked by tension and friction.

Critics accuse the Germans of achieving precisely the opposite effect of what they claim to be aiming for. "The Krauts are allowing the most dangerous people to get away and are in the process increasing the danger for the Afghans and for all foreign forces here," says an incredulous British officer at ISAF headquarters on Great Massoud Road in Kabul.

The case of the Baghlan bomber is not the end of the story. More trouble has been brewing for the Germans in Afghanistan. They are actually supposed to be currently participating in Operation Karez in northern Afghanistan in conjunction with the Afghan army and the Norwegian Quick Reaction Force. The operation, like a mission in autumn 2007, is aimed at fighting Taliban who have a stronghold in the northwestern province of Badghis. The Taliban forces there currently include about 150 hardliners and some 500 irregular fighters.

But because the area of operation, which is in Ghormach district, lies exactly on the border with the area under Italian command, the German government hesitated to deploy the reconnaissance, logistics and KSK forces which were originally promised by the German regional commander. It was only at the end of last week that German Defense Minister Franz Josef Jung decided to approve the mission after all. At that point, Germany's allies had already been taking part in bloody fighting for a week.

Last Friday, an armored infantry battalion from Augustdorf in the German state of North Rhine-Westphalia put on an impressive military display on a training ground for the benefit of the German Chief of Army Staff Hans-Otto Budde -- demonstrating, ironically, an operation to seize enemy combatants.

The battalion will be relieving the Norwegian Quick Reaction Force in northern Afghanistan as of July 1. Then, at the latest, the Germans will be on the frontline.