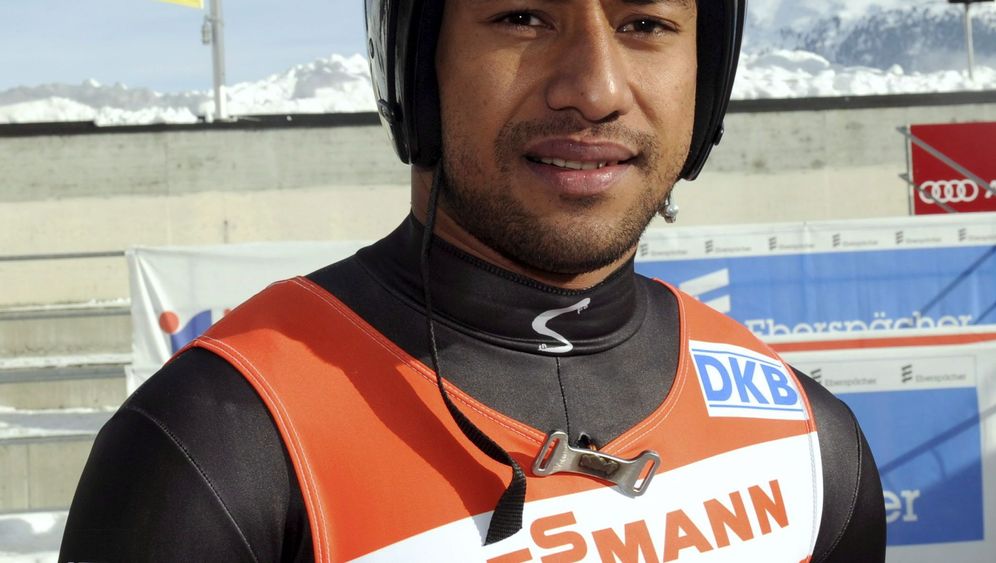 A cold wind is blowing through the Thuringian Forest. A man stands in the snow flurries on the slope above, near the finish line of the luge track in Oberhof, a small German town known as a winter sports destination. He's wearing a black athletic outfit bearing the inscription "Tonga," while his sleeve reads "Bruno Banani" in lettering similar to that used by the German underwear brand of the same name. He has a winter hat pulled down low over his dark complexion, the words "Coconut Powered" stitched on its brim and two stray dreadlocks poking out.

In conversation, the luger from Tonga -- an island nation in the South Pacific -- tends to repeat the same phrases. He talks about getting used to European temperatures and describes himself as a "speed junkie" -- though he will admit to praying before each run down the icy track. When the conversation turns personal, or when he's confronted with too many questions -- such as ones about his name -- he backs away with the excuse that he needs to check on his sled.

However, the fact is that many people are exceedingly eager to learn the man's story. Many camera teams have turned up at luging events to hear it, and many newspapers have run it. And that's because it reads like a fairy tale.

A Story Too Good to Be (All) True

It goes like this: A shy man and son of a coconut farmer grew up in his island paradise under the name Bruno Banani. The 24-year-old supposedly shares a name by pure coincidence with the fashionable underwear brand based in the eastern German city of Chemnitz, which advertises itself as "nonconformist and undogmatic." In late 2008, Banani answered a casting call to become his nation's first luger. According to the story, Princess Salote Mafile'o Pilolevu Tuita, daughter of the late King Taufa'ahau Tupou IV, had expressed a desire to see her country of 100,000 field an athlete in the Winter Olympics.

By now, Luger Banani has garnered the support of the International Luge Federation. He lives and trains in Germany, the world's powerhouse in the sport. There, the German national team, under coach Norbert Loch, trains the young Tongan while Georg Hackl, who won the Olympic gold three times for Germany in the 1990s, offers him tips. Meanwhile, the underwear designer in Chemnitz -- impressed by the amusing coincidence of the athlete's name -- has stepped in to sponsor training for Tonga's first winter athlete.

But, of course, only half of this story is true. There was, indeed, a casting session in Tonga, hosted by Isabel Barschinski, a former luger from the German ski resort town of Oberwiesenthal. And the Princess of Tonga really did want to see her country field a winter athlete. But, as recently as late 2008, the IT student chosen to fill that role was named not Bruno Banani, but Fuahea Semi. What's more, though his father is a farmer, he grows cassava rather than coconuts.

Still, this part of the story is true: Among those present at that South Pacific casting session was an agency that openly acknowledges its specialty in "guerrilla marketing," in other words, low-cost strategies that produce big effects. The California-based company's name, Makai, means "by the sea" in Hawaiian, and its CEO is acquainted with one of the Tongan princess's advisers. Mathias Ihle, the head of Makai Europe, based in the eastern German city of Leipzig, was also onboard from the start.

Ihle, 38, is sitting in a hotel near Leipzig's main train station. Eight employees from his company are holding an internal seminar there and have just come from a talk on "Ethics and Morals." Ihle refers to himself as a project manager or sometimes as a "liaison-officer to Tonga." But now, finding himself confronted with his client's real name -- Semi, rather than Banani, as revealed by SPIEGEL's research -- Ihle is watching his project go up in flames.

Next week, Semi -- aka Banani -- is scheduled to participate in the 2012 World Luge Championships in Altenberg, Germany. One of the event's sponsors is none other than Bruno Banani, the underwear company. Even ZDF, a German public television broadcaster, aired a piece on Bruno on its news magazine "heute journal." In it, ZDF suggested that the touching, exotic story of the luger from the South Sea bore similarities to that of the Jamaican bobsled team whose participation in the 1988 Calgary Winter Olympics inspired the 1993 Hollywood comedy "Cool Runnings."

Ihle has brought along his company co-director, Christian Belter, who accidentally introduces himself as "Mathias Belter." Indeed, by this point, everything having to do with names is getting muddled up. Both men are nervous and don't want to say anything. But after an hour, they confer, and Ihle admits everything. He says he "revealed" to the nation of Tonga how the athlete, once cast as "Bruno Banani," could be "better marketed in the media."

At that time, he says, the underwear company from Chemnitz wasn't in on the plan. Negotiations with Tongan authorities took six months, and then a new passport and even a new birth certificate bearing the new name were issued to Semi, almost as if he were part of some witness-protection program.

Ihle defends himself by saying that his agency hardly had any clients at that point. "We wanted to show the world that we have good ideas," he says.

A First in Sports Marketing

Of course, in the world of sports, this isn't the first example of strange and aggressive marketing. There's the Berlin basketball team Alba Berlin, named after a waste-disposal company, and the football team FC Nuremberg, which plays at the "easyCredit Stadium." Then there's German ski jumper Martin Schmitt, the underside of whose skis read "fluege.de," the name of an online site for purchasing airplane flights. When the website discovered that regulations allowed only the manufacturer's name to be used on athletes' equipment, it quickly bought a share in a Thuringia-based ski company, which now goes by the brand name fluege.de.

Still, until now, naming the participants in athletic competitions after their sponsors was limited to world of horse-racing. Ihle points out, however, that his plan worked out. After all, thanks to its luging namesake, the company Bruno Banani is now a Makai client or, more precisely, Makai Europe manages the fashion brand's social-media presence.

Still, Ihle isn't looking for praise on his PR coup. Rather, now that the truth is out, he's worried that the International Olympic Committee might judge Bruno's participation to be covert advertising and therefore bar him from participating in the Games. Were that to happen, it would ruin the plan of having the Tongan athlete finish among the top 20 at the 2014 Winter Olympics to be held in Sochi, Russia.

Ihle says that Bruno, formerly known as Fuahea, has come to enjoy his new life in shared apartments and sports schools in eastern Germany. He's reportedly even adjusted to the German winter and is serious about his sport. Despite a crash during the qualifications for the 2010 Vancouver Winter Olympics that landed him in the hospital with a concussion, Ihle says, the Tongan luger has been steadily improving ever since.

In fact, Ihle says that he and Bruno have become friends, and he hopes no one will strip the man of his chance at making an Olympic dream come true.

Jan Jassner, a managing director of the Bruno Banani underwear company, says he wasn't aware of the name switcheroo. But he also says it doesn't matter. After all, he says, the company has already released its "Coconut Powered" fashion line, inspired by the luger, and "will continue to support Bruno."

If all else fails, perhaps Ihle could fall back on some of the other ideas for athletes' names that he tossed around early on in the campaign. There could be a winter athlete named "Calvin Klein," for example, or even a "Victoria Secret."