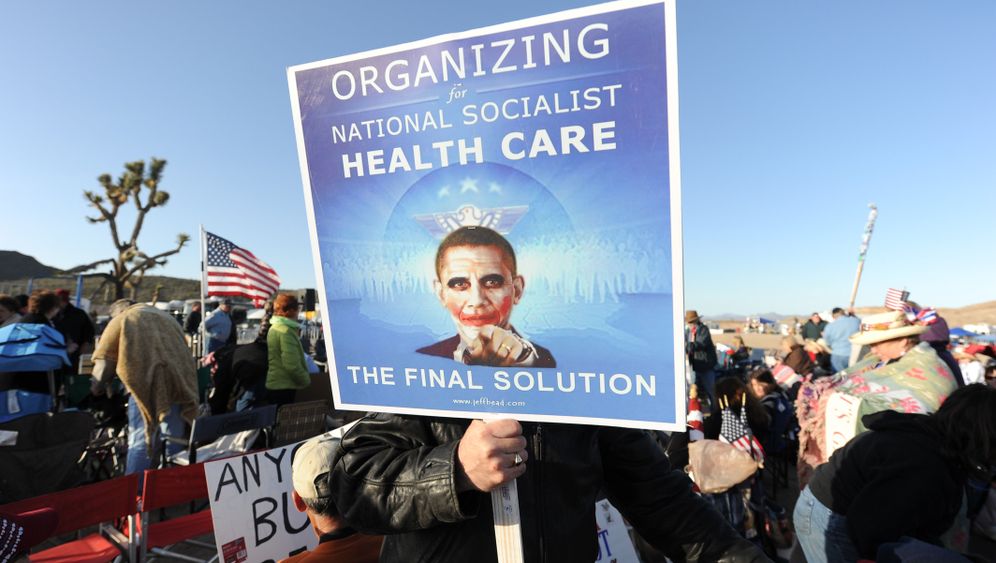 German politicians are well aware of the dangers of making ill-thought-out references to their country's history. In 2002, then-German Justice Minister Herta Däubler-Gmelin, speaking to the southern German daily Schwäbisches Tagblatt, said in reference to US President George W. Bush's increasingly bellicose rhetoric against Iraq: "Bush wants to distract people from his domestic difficulties. It is a popular method. Hitler did the same thing."

It was the hint of a parallel more than a direct comparison. But Germans, the majority of whom hated Bush even then, were outraged -- and Däubler-Gmelin paid a high price for it. She was forced to resign.

The lesson doesn't seem to have made it across the Atlantic.

In this midterm campaign season in the US, German history seems to be everywhere. In June, conservative columnist Thomas Sowell of JewishWorldReview.com essentially argued that President Barack Obama, by requiring that BP pay $20 billion (€14.3 billion) to compensate those harmed by the oil spill in the Gulf of Mexico, was following in the footsteps of Adolf Hitler -- and was promptly praised by Sarah Palin and Republican Congressman Louie Gohmert of Texas.

Other examples abound. A Tea Party campaign poster in Iowa depicted Obama flanked by both Hitler and Lenin. Conservative talking head and Tea Party heartthrob Glenn Beck can hardly get through one of his Fox News shows without an Obama-Hitler comparison. Palin also accused Obama's health care plan of including "death panels." And one Tea Party candidate, Rich Iott, even enjoys dressing up as a Nazi now and then.

Last weekend, another Tea Party-backed candidate moved on to a different chapter in German history. Joe Miller, a Republican candidate for Senate in Alaska, intimated that the US should build a Berlin Wall on its border with Mexico. "East Germany was very, very able to reduce the flow," he said. "If East Germany could, we could."

It is perhaps only natural that Germans would be a bit more sensitive to these kinds of wilfully ignorant comparisons than Americans. The Berlin Wall, after all, only came down just over two decades ago. And World War II, while ancient history from the perspective of the US, still plays a very active role in the way Germans see their country and the way Germany interacts with the world.

But there is a more fundamental reason that German politicians and talking heads avoid making flippant references to either the Nazi or communist dictatorships from their country's past -- and why they often pay with their jobs if they cross the line. You can't talk about Hitler without also referring to the historically unique, industrialized slaughter of the Holocaust. Similarly, you can't talk about East Germany's Berlin Wall and ignore the appalling oppression the regime visited on its citizens.

There is, in other words, a reason that East Germany was "very, very able to reduce the flow." It wasn't the barrier itself. After all, numerous people devised ingenious ways to escape over, under and through the Berlin Wall (on their way out of, and not into, East Germany, it should be noted). It's just that not all that many had the courage to try. If they were seen, they were shot.

Along with the wall came dogs trained to tear people apart, armed guards equipped with shoot-to-kill orders, mines, and an extremely able domestic intelligence system that permeated all parts of society.

Emaciated Corpses and Zyklon B

Despite Joe Miller's bodyguards having thrown a journalist into handcuffs recently, it is hard to believe that he had such a totalitarian state in mind when he made his wall comments. But the Berlin Wall without the morally bankrupt East German regime behind it would not have worked.

For most Germans, though, the Hitler comparisons are vastly more offensive. It is almost impossible to finish high school in Germany without going on a class visit to a former concentration camp. They are not pleasant places to be. While the sites themselves might now be little more than windswept rows of foundations where hopelessly overcrowded, disease-ridden barracks once stood, the museum exhibits tend to be much more disturbing. Images of trucks full of emaciated corpses, ovens where tens of thousands of bodies were burned, photos of SS commandos on the Eastern Front shooting row upon row of Jews, a canister of the poison gas Zyklon B -- all are likely to be on display.

During his show on Oct. 5, Glenn Beck said that Obama's science adviser John Holdren's concern about the global population and White House health policy adviser Ezekiel Emanuel's warnings about global warming are "the kind of thinking that led to … the extermination program that eventually led to the Holocaust."

It would be hard to find someone on this side of the Atlantic who wouldn't cringe at the ignorance of that statement. Leaving aside the question as to whether or not one should be concerned about climate change and an overcrowded planet, the kind of thinking that led to the Holocaust was a different one. Hitler wanted a racially pure Germany. People with handicaps didn't fit. Neither did Jews, Gypsies, Slavs, blacks, Asians, Arabs or homosexuals.

Not a Children's Choir

The Holocaust was the result of murderous ideological fanaticism of the kind not to be found in leaders forced to face re-election every four years. It was not the result of a policy meeting.

Similarly, back in June Glenn Beck said that children singing for Barack Obama was "out of the playbook … of the Third Reich ….This is Hitler Youth." One can assume that not all of Beck's listeners and viewers know what the Hitler Youth was. Beck himself, an astute, if cynical, student of history, certainly does. The Hitler Youth was the ideological training grounds designed to prepare German boys for a glorious career in the SS murdering anyone who stood in the way of the Führer's dream of a vast and racially pure German Reich. It was not a dictator's private children's choir.

One can forgive those like Glenn Beck and his Tea Party followers for hating Barack Obama. The liberals, after all, were passionately opposed to George W. Bush and rarely shied away from hyperbole in their expressions of loathing. But it is hard to imagine even the most hard-bitten Tea Party activist sincerely believing that President Barack Obama wants to systematically murder over 6 million people like Adolf Hitler did.

And that is necessarily the implication. Germans are not worried that using Nazi comparisons are overly offensive to those targeted. Rather, the concern is that such flippant uses of the most horrible chapter in human history, in the case of the Hitler comparisons, and the shocking overreach of a totalitarian state, in the case of East Germany, unavoidably relativizes that history. It makes it easier for people to say "maybe it wasn't all that bad." In the case of Nazism, it makes it easier to ignore the monstrous scale of the crimes committed in the name of a misguided ideology.

With Germany's 20th century crimes fading into the past, that is a dangerous path to take. It is a path that all politicians, whatever their leanings, should avoid. The Tea Party should keep their hands off German history.