A coronavirus test with the number 7371999 was actually supposed to be Novak Djoković's ticket for unproblematic entry into Australia. That positive test is the most important argument the unvaccinated tennis player has presented for why he should be allowed into the country, despite its strict entry regulations, to play in the Australian Open, which begins on Jan. 17. The PCR test was performed at 1:05 p.m. on Dec. 16, and seven hours later, the positive result was returned.

That, at least, is the story told by documentation from the Institute of Public Health of Serbia, which Djoković's lawyers later presented in court. But a closer look at the allegedly positive PCR test, especially its digital version, raises questions.

The digital data suggests that the test results aren’t from Dec. 16 at all. In the digital results, there is a timestamp for 2:21 p.m. Serbian time on Dec. 26. Such timestamps are normally produced automatically by corona test systems, marking when individual tests are entered into the relevant database. That usually happens just a few minutes after the test result becomes available. Another possibility could be that the timestamps are generated when the tested person downloads the results from the server.

Djoković's lawyers also presented a second, negative test as part of the tennis star’s immigration proceedings. That test was apparently meant to prove that Djoković had since recovered from his COVID-19 illness. According to the documentation presented, it is from the afternoon of Dec. 22 – and the timing of that test is confirmed by the digital timestamp.

The test results also include QR codes, and when DER SPIEGEL scanned the QR code for the test from Dec. 16, things got strange. At 1:19 p.m. on Monday (CET), the result from the scan was "test result Negative." Such a result would have destroyed Djoković's case for being allowed into the country. About an hour later, though, at 2:33 p.m. on Monday, a second scan of the QR code returned a different result: "Test result Positive."

There are also additional indications that cast doubt on whether Djoković really tested positive on Dec. 16.

"We could reconstruct that these ID numbers are assigned consecutively," say IT experts with zerforschung, a German group of digital sleuths that has examined IT security loopholes in test systems on several occasions. The group has also taken a closer look at the process relating to Djoković's digital test certificates.

Their findings indicate that, according to the ID numbers attached to the Serbian test results, the negative test was performed prior to the positive test and entered into the database. Not the other way around, as Djoković's lawyers claim and as the Serbian health documents would seem to indicate at first glance.

This explanation makes even more sense when one considers that 50,000 tests were performed between Dec. 22 and Dec. 26 according to Serbian health data. That is precisely the difference between the two identification numbers of Djoković's two tests. According to official Serbian statistics, the country has now performed a total of over 7.4 million tests.

"Based on these pieces of evidence, the most plausible explanation is that the positive test result was added to the official Serbian database on the 26th of December, and not on the 16th," say the experts from zerforschung.

Does that mean, then, that Djoković's positive PCR test was taken much later than he claims? Was the test further manipulated? And how can it be explained that the digital version of the test result indicated for a short period of time on Monday, Jan. 10 that the result was negative?

All such questions could only be answered either by Djoković himself or by Serbian officials. Neither, however, have yet responded to queries sent by DER SPIEGEL.

Djoković practicing at Rod Laver Arena on Tuesday, where the Australian Open is slated to begin in just days.

But the riddle over the allegedly positive PCR test from Dec. 16, the central piece of evidence in the case, isn’t the only inconsistency. Djoković is also facing suspicions of providing false information. If the suspicions are confirmed, legal consequences could follow and the best tennis player in the world could see his visa withdrawn ahead of the tournament start next Monday.

The question that Australian immigration officials have been trying to clear up since last Tuesday is this: Did Djoković lie when filling out his Australia Travel Declaration in order to be allowed into the country? And if so, can he be deported as a result?

Among the numerous court documents made public in Australia on Monday is a health declaration from Jan. 1, which Djoković, like everyone arriving in Australia, was required to fill out ahead of his flight. One of the questions asked on that form is: "Have you traveled or will you travel in the 14 days prior to your flight to Australia?" The form includes a clear note indicating that: "Giving false or misleading information is a serious offence. You may also be liable to a civil penalty for giving false or misleading information."

Did Djoković Lie on Arrival?

In an interview with border officials after landing in Melbourne last Thursday, Djoković said the document had been filled out by his agent. That, though, changes nothing about the facts of the case. The 34-year-old answered the question by checking the "no" box.

That answer has raised a number of questions given that numerous postings on social media indicate that Djoković was in Belgrade over Christmas. A Portuguese journalist posted a photo on Dec. 25 of Djoković together with the Serbian handball player Patar Djordjic – a picture that was allegedly taken in Belgrade.

According to Britain's Guardian newspaper, Djoković was also shown in an Instagram video from Dec. 26 playing tennis on the streets of Belgrade. The video has since been deleted.

In a sworn deposition for the court in Melbourne, Djoković wrote that he traveled "from Spain to Melbourne via Dubai" on Jan. 4. Numerous media outlets had also reported that Djoković had been training for the Australian open in the southern Spanish city of Marbella.

If he really was in Belgrade over Christmas and flew to Spain before then flying onward to Melbourne on Jan. 4, then he and his legal representative lied on the Australia Travel Declaration.

In response to questions as to whether the declaration could provide additional reasons for the annulation of Djoković’s visa, a spokesman for Immigration Minister Alex Hawke said on Tuesday that the minister was still considering whether to make use of the powers he has at his disposal. A decision is expected on Wednesday.

That, though, may not be the end of it. Djoković would be able to appeal should he be asked to leave the country.

Editor's note: We added that the timestamp may also indicate when the test was downloaded from the servers. 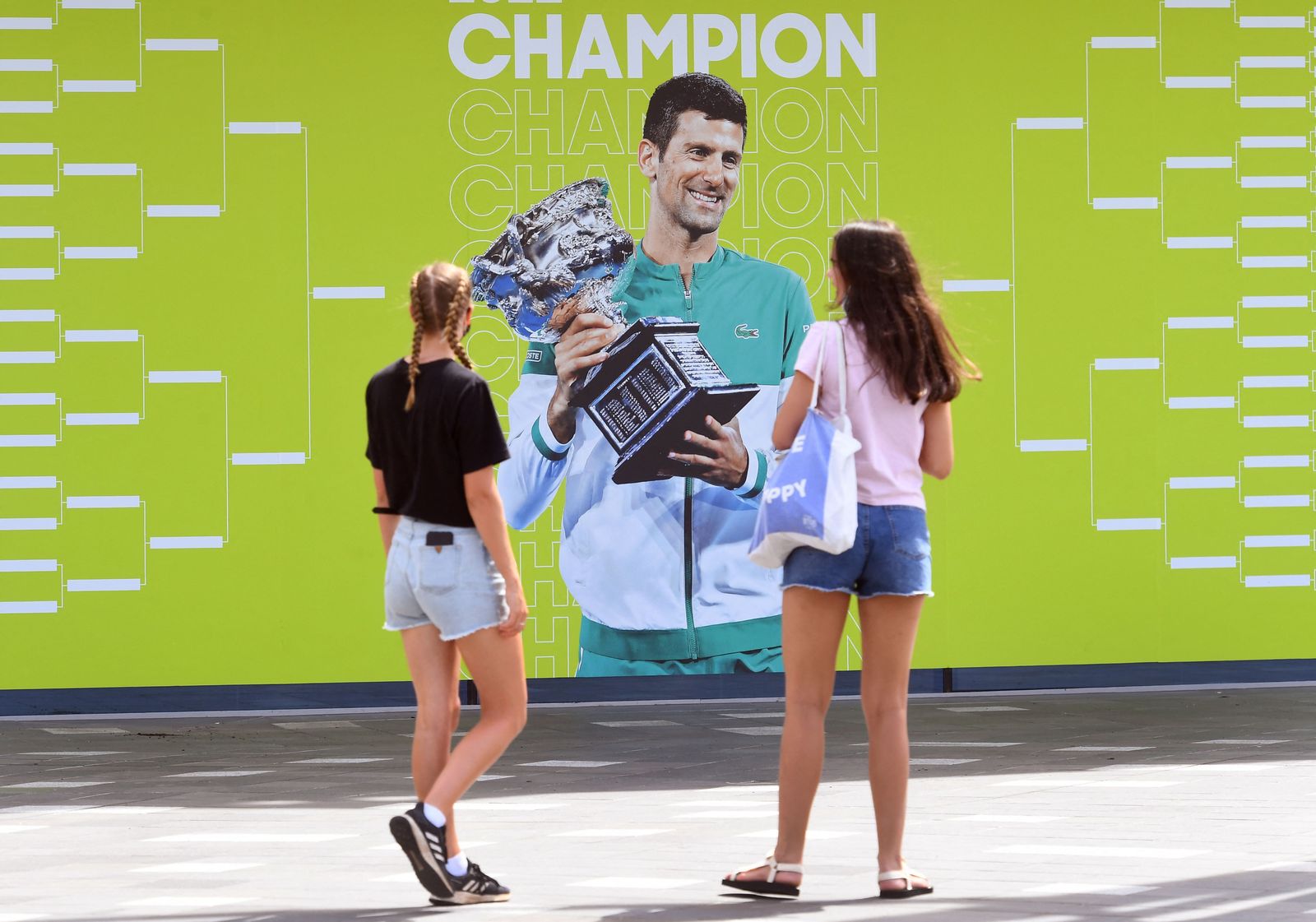 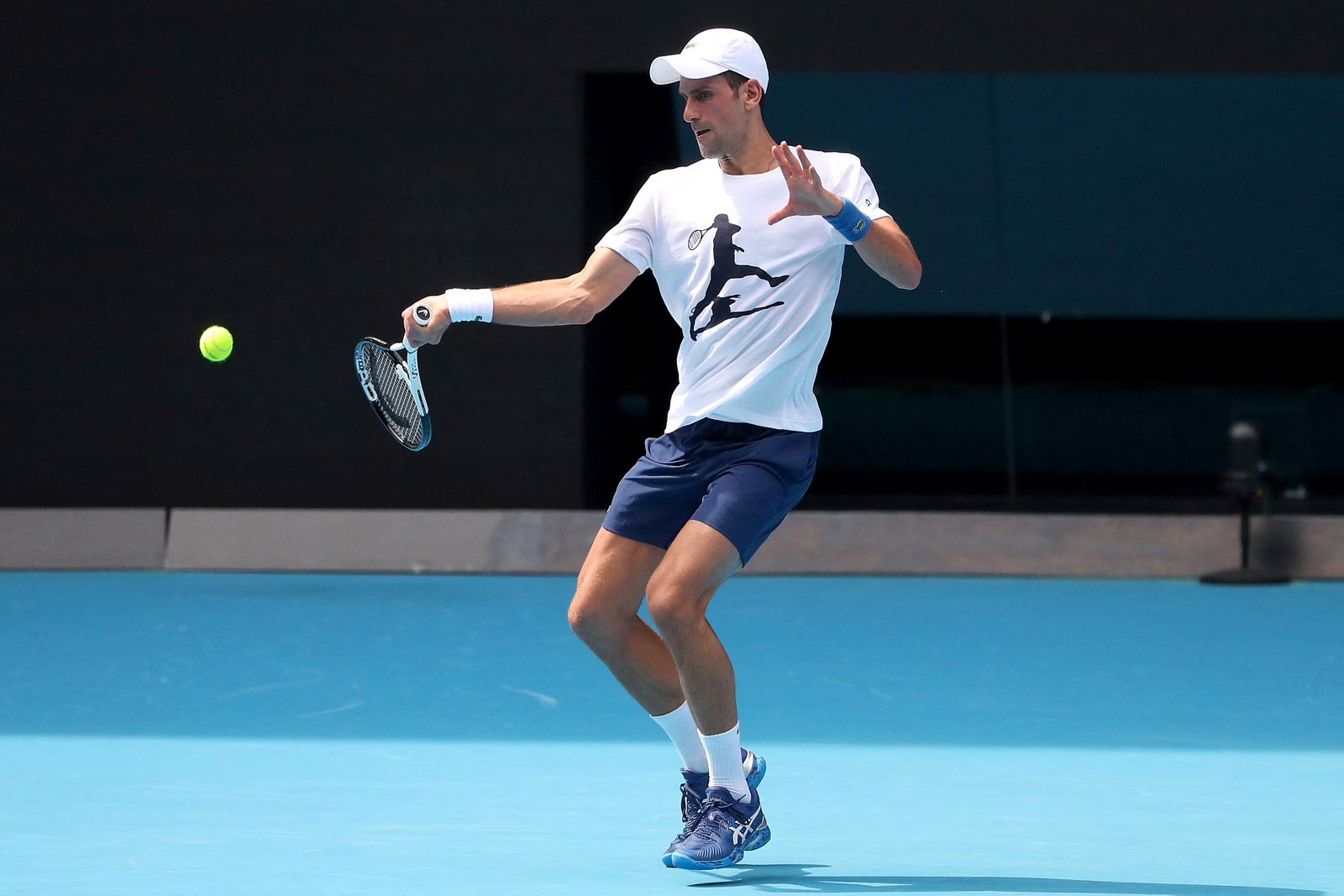 Djoković practicing at Rod Laver Arena on Tuesday, where the Australian Open is slated to begin in just days.