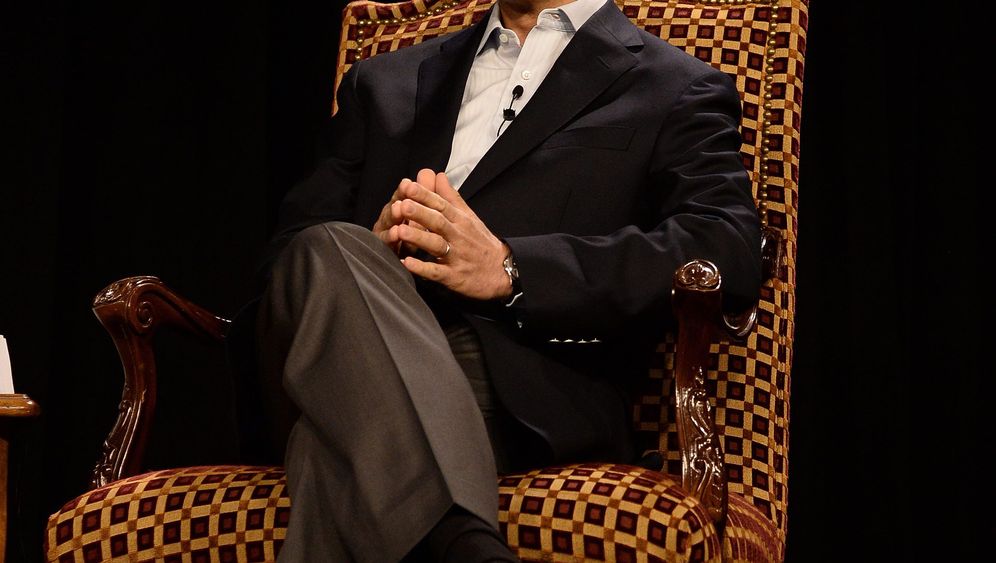 That category includes surveillance of neighboring Mexico, and in May 2010, the division reported its mission accomplished. A report classified as "top secret" said: "TAO successfully exploited a key mail server in the Mexican Presidencia domain within the Mexican Presidential network to gain first-ever access to President Felipe Calderon's public email account."

According to the NSA, this email domain was also used by cabinet members, and contained "diplomatic, economic and leadership communications which continue to provide insight into Mexico's political system and internal stability." The president's office, the NSA reported, was now "a lucrative source."

This operation, dubbed "Flatliquid," is described in a document leaked by whistleblower Edward Snowden, which SPIEGEL has now had the opportunity to analyze. The case is likely to cause further strain on relations between Mexico and the United States, which have been tense since Brazilian television network TV Globo revealed in September that the NSA monitored then-presidential candidate Enrique Peña Nieto and others around him in the summer of 2012. Peña Nieto, now Mexico's president, summoned the US ambassador in the wake of that news, but confined his reaction to demanding an investigation into the matter.

Now, though, the revelation that the NSA has systematically infiltrated an entire computer network is likely to trigger deeper controversy, especially since the NSA's snooping took place during the term of Peña Nieto's predecessor Felipe Calderón, a leader who worked more closely with Washington than any other Mexican president before him.

Reports of US surveillance operations have caused outrage in Latin America in recent months. Brazilian President Dilma Rousseff cancelled a planned trip to Washington five weeks ago and condemned the NSA's espionage in a blistering speech to the United Nations General Assembly.

The US surveillance of politicians in Mexico and Brazil is not a one-off. Internal documents show these countries' leaders represent important monitoring targets for the NSA, with both Mexico and Brazil ranking among the nations high on an April 2013 list that enumerates the US' surveillance priorities. That list, classified as "secret," was authorized by the White House and "presidentially approved," according to internal NSA documents.

The list ranks strategic objectives for all US intelligence services using a scale from "1" for high priority to "5" for low priority. In the case of Mexico, the US is interested primarily in the drug trade (priority level 1) and the country's leadership (level 3). Other areas flagged for surveillance include Mexico's economic stability, military capabilities, human rights and international trade relations (all ranked at level 3), as well as counterespionage (level 4). It's much the same with Brazil -- ascertaining the intentions of that country's leadership ranks among the stated espionage targets. Brazil's nuclear program is high on the list as well.

When Brazilian President Rousseff took office in early 2011, one of her goals was to improve relations with Washington, which had cooled under her predecessor, the popular former labor leader Luiz Inácio Lula da Silva. Lula focused primarily on establishing closer ties with China, India and African nations, and even invited Iran's then-President Mahmoud Ahmadinejad to Brazil, in a snub to the US. President Barack Obama postponed a planned visit to the capital, Brasília, as a result.

Rousseff, however, has distanced herself from Iran. And the first foreign minister to serve under her, Antonio Patriota, who recently resigned, was seen as friendly toward the US, maintaining good ties with his counterpart Hillary Clinton. Obama made a state visit to Brazil two years ago and Rousseff had planned to reciprocate with a visit to Washington this October.

Then came the revelation that US authorities didn't stop short of spying on the president herself. According to one internal NSA presentation, the agency investigated "the communication methods and associated selectors of Brazilian President Dilma Rouseff and her key advisers." It also said it found potential "high-value targets" among her inner circle.

Rousseff believes Washington's reasons for employing such unfriendly methods are partly economic, an accusation that the NSA and its director, General Keith Alexander, have denied. Yet according to the leaked NSA documents, the US also monitored email and telephone communications at Petrobras, the oil corporation in which the Brazilian government holds a majority stake. Brazil possesses enormous offshore oil reserves.

Just how intensively the US spies on its neighbors can be seen in another, previously unknown operation in Mexico, dubbed "Whitetamale" by the NSA. In August 2009, according to internal documents, the agency gained access to the emails of various high-ranking officials in Mexico's Public Security Secretariat that combats the drug trade and human trafficking. This hacking operation allowed the NSA not only to obtain information on several drug cartels, but also to gain access to "diplomatic talking-points." In the space of a single year, according to the internal documents, this operation produced 260 classified reports that allowed US politicians to conduct successful talks on political issues and to plan international investments.

The tone of the document that lists the NSA's "tremendous success" in monitoring Mexican targets shows how aggressively the US intelligence agency monitors its southern neighbor. "These TAO accesses into several Mexican government agencies are just the beginning -- we intend to go much further against this important target," the document reads. It goes on to state that the divisions responsible for this surveillance are "poised for future successes."

While these operations were overseen from the NSA's branch in San Antonio, Texas, secret listening stations in the US Embassies in Mexico City and Brasília also played a key role. The program, known as the "Special Collection Service," is conducted in cooperation with the CIA. The teams have at their disposal a wide array of methods and high-tech equipment that allow them to intercept all forms of electronic communication. The NSA conducts its surveillance of telephone conversations and text messages transmitted through Mexico's cell phone network under the internal code name "Eveningeasel." In Brasília, the agency also operates one of its most important operational bases for monitoring satellite communications.

This summer, the NSA took its activities to new heights as elections took place in Mexico. Despite having access to the presidential computer network, the US knew little about Enrique Peña Nieto, designated successor to Felipe Calderón.

In his campaign appearances, Peña Nieto would make his way to the podium through a sea of supporters, ascending to the stage like a rock star. He is married to an actress, and also had the support of several influential elder statesmen within his party, the PRI. He promised to reform the party and fight pervasive corruption in the country. But those familiar with the PRI, which is itself regarded by many as corrupt, saw this pledge as little more than a maneuver made for show.

First and foremost, though, Peña Nieto promised voters he would change Mexico's strategy in the war on drugs, announcing he would withdraw the military from the fight against the drug cartels as soon as possible and invest more money in social programs instead. Yet at the same time, he assured Washington there would be no U-turn in Mexico's strategy regarding the cartels. So what were Peña Nieto's true thoughts at the time? What were his advisers telling him?

The NSA's intelligence agents in Texas must have been asking themselves such questions when they authorized an unusual type of operation known as structural surveillance. For two weeks in the early summer of 2012, the NSA unit responsible for monitoring the Mexican government analyzed data that included the cell phone communications of Peña Nieto and "nine of his close associates," as an internal presentation from June 2012 shows. Analysts used software to connect this data into a network, shown in a graphic that resembles a swarm of bees. The software then filtered out Peña Nieto's most relevant contacts and entered them into a databank called "DishFire." From then on, these individuals' cell phones were singled out for surveillance.

According to the internal documents, this led to the agency intercepting 85,489 text messages, some sent by Peña Nieto himself and some by his associates. This technology "might find a needle in a haystack," the analysts noted, adding that it could do so "in a repeatable and efficient way."

It seems, though, that the NSA's agents are no longer quite as comfortable expressing such pride in their work. Asked for a comment by SPIEGEL, the agency replied: "We are not going to comment publicly on every specific alleged intelligence activity, and as a matter of policy we have made clear that the United States gathers foreign intelligence of the type gathered by all nations. As the President said in his speech at the UN General Assembly, we've begun to review the way that we gather intelligence, so that we properly balance the legitimate security concerns of our citizens and allies with the privacy concerns that all people share."

Meanwhile, the NSA's spying has already caused considerable political damage in the case of Brazil, seriously denting the mutual trust between Rousseff and Obama. Brazil now plans to introduce a law that will force companies such as Google and Facebook to store their data inside Brazil's borders, rather than on servers in the US, making these international companies subject to Brazilian data privacy laws. The Brazilian government is also developing a new encryption system to protect its own data against hacking.

So far, Mexico has reacted more moderately -- although the fact that the NSA infiltrated even the presidential computer network wasn't known until now. Commenting after TV Globo first revealed the NSA's surveillance of text messages, Peña Nieto stated that Obama had promised him to investigate the accusations and to punish those responsible, if it was found that misdeeds had taken place.

In response to an inquiry from SPIEGEL concerning the latest revelations, Mexico's Foreign Ministry replied with an email condemning any form of espionage on Mexican citizens, saying such surveillance violates international law. "That is all the government has to say on the matter," stated a spokesperson for Peña Nieto.

Presumably, that email could be read at the NSA's Texas location at the same time.