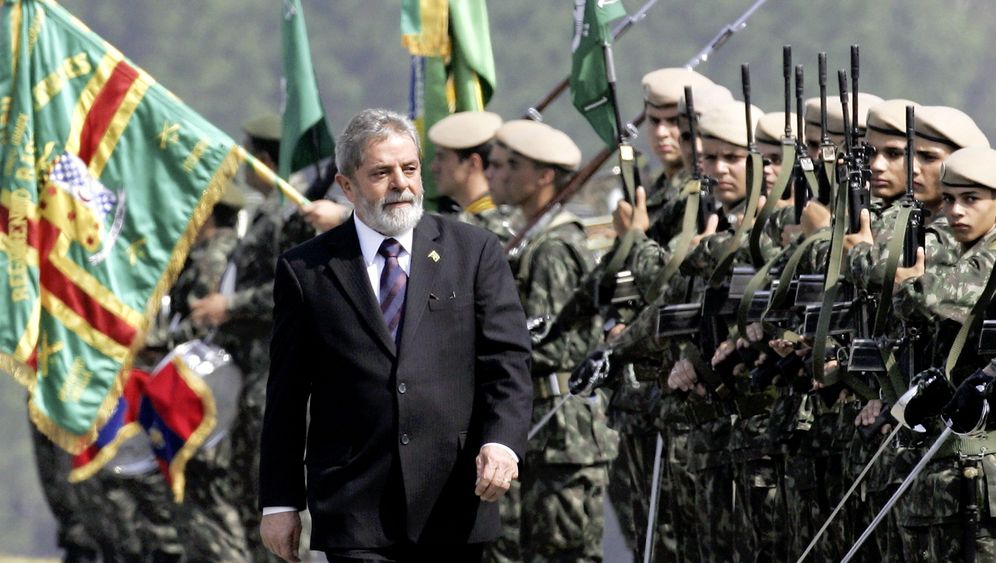 Photo Gallery: Atomic in the Tropics

In October 2009, the prestigious American periodical Foreign Policy published an article titled "The Future Nuclear Powers You Should Be Worried About." According to the author, Kazakhstan, Bangladesh, Burma, the United Arab Emirates and Venezuela are the next candidates -- after Iran -- for membership in the club of nuclear powers. Despite his interesting arguments, the author neglected to mention the most important potential nuclear power: Brazil.

Nowadays, Brazil is held in high esteem by the rest of the world. Its president, Luiz Inácio Lula da Silva, has become a star on the international stage. "That's my man right here," US President Barack Obama once said, in praise of his Brazilian counterpart. Lula, as he is known, can even afford to receive Iranian President Mahmoud Ahmadinejad with all honors and demonstratively endorse his nuclear program, for which Iran is now ostracized around the world.

Lula da Silva's self-confidence is indicative of Brazil's claim to the status of a major power -- including in military terms. The military claim is reflected in the country's National Defense Strategy, which was unveiled in late 2008. In addition to the mastery of the complete nuclear fuel cycle -- which has since been achieved -- the document calls for the building of nuclear-powered submarines.

Close to Building a Bomb

It sounds harmless enough, but it isn't, because the term "nuclear-powered submarines" could in fact be a cover for a nuclear weapons program. Brazil already had three secret military nuclear programs between 1975 and 1990, with each branch of its armed forces pursuing its own route. The navy's approach proved to be the most successful: using imported high-performance centrifuges to produce highly enriched uranium from imported uranium hexafluoride, so as to be able to operate small reactors for submarines. At the appropriate time, the country's newly acquired nuclear capabilities were to be revealed to the world with a "peaceful nuclear explosion," based on the example set by India. The 300-meter (984-foot) shaft for the test had already been drilled. According to statements by the former president of the National Nuclear Energy Commission, in 1990 the Brazilian military was on the verge of building a bomb.

But it never came to that. During the course of Brazil's democratization, the secret nuclear programs were effectively abandoned. Under the country's 1988 constitution, nuclear activities were restricted to "peaceful uses." Brazil ratified the Treaty for the Prohibition of Nuclear Weapons in Latin America and the Caribbean in 1994 and, in 1998, the Nuclear Nonproliferation Treaty (NPT) and the Comprehensive Nuclear-Test-Ban Treaty. Brazil's flirtation with the bomb had apparently ended.

Under Lula da Silva, however, this flirtation has now been reignited, and the Brazilians are becoming less and less hesitant about toying with their own nuclear option. Only a few months after Lula's inauguration in 2003, the country officially resumed the development of a nuclear-powered submarine.

Even during his election campaign, Lula criticized the NPT, calling it unfair and obsolete. Although Brazil did not withdraw from the treaty, it demonstratively tightened working conditions for inspectors from the International Atomic Energy Authority (IAEA). The situation became tense in April 2004, when the IAEA was denied unlimited access to a newly built enrichment facility in Resende, near Rio de Janeiro. The Brazilian government also made it clear that it did not intend to sign the additional protocol to the NPT, which would have required it to open previously undeclared facilities to inspection.

In mid-January 2009, during a meeting of the Nuclear Suppliers Group, a group of nuclear supplier countries that works toward nonproliferation by controlling exports of nuclear materials, the reasons for this restrictive policy became clear to attendees when Brazil's representative did his utmost to fight requirements that would have made the nuclear submarine program transparent.

Why all this secrecy? What is there to hide in the development of small reactors to power submarines, systems that several countries have had for decades? The answer is as simple as it is unsettling: Brazil is probably also developing something else in the plants it has declared as production facilities for nuclear submarines: nuclear weapons. Vice President José Alencar offered a reason when he openly advocated Brazil's acquisition of nuclear weapons in September 2009. For a country with a 15,000-kilometer border and rich offshore oil reserves, Alencar says, these weapons would not only be an important tool of "deterrence," but would also give Brazil the means to increase its importance on the international stage. When it was pointed out that Brazil had signed the NPT, Alencar reacted calmly, saying it was "a matter that was open to negotiation."

How exactly could Brazil go about building nuclear weapons? The answer, unfortunately, is that it would be relatively easy. A precondition for the legal construction of small reactors for submarine engines is that nuclear material regulated by the IAEA is approved. But because Brazil designates its production facilities for nuclear submarine construction as restricted military areas, the IAEA inspectors are no longer given access. In other words, once the legally supplied enriched uranium has passed through the gate of the plant where nuclear submarines are being built, it can be used for any purpose, including the production of nuclear weapons. And because almost all nuclear submarines are operated with highly enriched uranium, which also happens to be weapons grade uranium, Brazil can easily justify producing highly enriched nuclear fuel.

Even if there is no definitive proof of Brazil's nuclear activities (yet), past events suggest that it is highly likely that Brazil is developing nuclear weapons. Neither the constitutional prohibition nor the NPT will prevent this from happening. All it would take to obtain a parliamentary resolution to eliminate these obstacles would be for Lula da Silva to say that the United States is not entitled to a monopoly on nuclear weapons in the Americas. If that happens, Latin America would no longer be a nuclear weapons-free zone -- and Obama's vision of a nuclear-free world would be finished.