They brought out the big guns in Washington this week, and all because of Iran: First, Vice President Joe Biden addressed Congress, followed by Secretary of State John Kerry. Earlier, President Barack Obama had his spokesperson Jay Carney stress that "the American public does not want a march to war." There was no mistaking how seriously the administration is taking the Iran question.

The gist of its message is that Congress should not press ahead with harsher sanctions against Tehran. Kerry had only just returned from Geneva, where the P5+1 group -- the five permanent members of the UN Security Council and Germany -- had been in talks with Iranian negotiators about the country's nuclear détente. "We were very, very close actually, extremely close," Kerry told the BBC in an interview on Monday. But the talks concluded without a deal, resulting merely in a decision to resume negotiations at a lower level in Geneva next week. This left the White House in a tight spot back home.

Had Kerry unexpectedly returned with a deal, Congress would have been unlikely to torpedo it. But the break in talks now affords its cross-party detractors amongst members of Congress and the Senate an opportunity to stall Obama's Iran strategy.

In late July, the House of Representatives voted 400 to 20 to impose tighter sanctions. Now the ball is in the Senate's court. On Wednesday, Kerry appealed to the Senate Banking Committee not to forge ahead with a new sanctions push before the resumption of talks. "The risk is that if Congress were to unilaterally move to raise sanctions, it could break faith in those negotiations, and actually stop them and break them apart," he said. "We put these (existing Iran) sanctions in place in order to be able to put us in the strongest position possible to be able to negotiate. We now are negotiating," Kerry said before entering the closed-door meeting.

Many beg to differ. "We cannot substitute wild-eyed hope for clear-eyed pragmatism given Iran's historical record of deception," argued Democratic Senator Bob Menendez, chairman of the Senate Foreign Relations Committee. "While the new Iranian president appears to support constructive engagement, Iran's centrifuges spin and its nuclear program expands," he wrote in the New York Times. Menendez is confident that tighter sanctions will prompt Iran to terminate its nuclear weapons program, and he also points out that they would only become effective in several months time, leaving Iranian President Hassan Rohani ample time to demonstrate his sincerity.

It remains to be seen if Kerry's efforts to convince senators to hold back will pay off. Republican Senator Bob Corker deemed his briefing "disappointing" while his colleague Mark Kirk accused Obama's administration of appeasing Iran like Britain did Nazi Germany in the 1930s.

Their main criticism is of the finer points of the deal Kerry negotiated in Geneva last week and hopes can still be reached. In their opinion, it doesn't go far enough. The international community will relax sanctions and Iran will limit its uranium enrichment capacity and stop work on a heavy-water nuclear reactor. Iran would only be pressured to suspend its nuclear weapons production at a later stage.

All this amounts to is a delaying tactic, argue the skeptics. "Why should we pause our sanctions efforts as the administration is pressuring Congress to do?" railed Ed Royce, a Republican and the House Foreign Affairs Committee chairman. Why indeed? Isn't Senator Menendez right to question Iran's reliability?

Perhaps he is. But it is also true to say that tougher sanctions would do nothing to improve the situation. They would in fact allow the Mullahs to cast themselves as victims, thwarted in their willingness to compromise. If the US wants to end its Cold War with Iran and persuade it to relinquish the nuclear production program it can hardly deny it is pursuing, it will have to offer some kind of incentive. It cannot expect Tehran to capitulate without a fight.

"There is a struggle in Tehran today between those who want Iran to behave as a nation, looking out for its interests, and those who want it to continue behaving as a permanent revolution in a permanent struggle with America and its allies," wrote New York Times columnist Thomas Friedman this week. Why not reach out to these supposed moderates who support Rohani? Obviously, they are neither moderate nor democratic -- they too see themselves as holy warriors, as does Rohani. But at least they are not as irrational as North Korean leader Kim Jong Un.

With its diplomatic charm offensive -- as seen at the UN in September, for example -- Tehran is showing that it would like to see a thaw in its relations with the US. But now the Mullahs have to translate words into deeds. They must also be allowed to do so. The wheels of the negotiations in Geneva need greasing. At this stage, no one should lose sight of the main objective: to prevent Iran from building nuclear weapons. 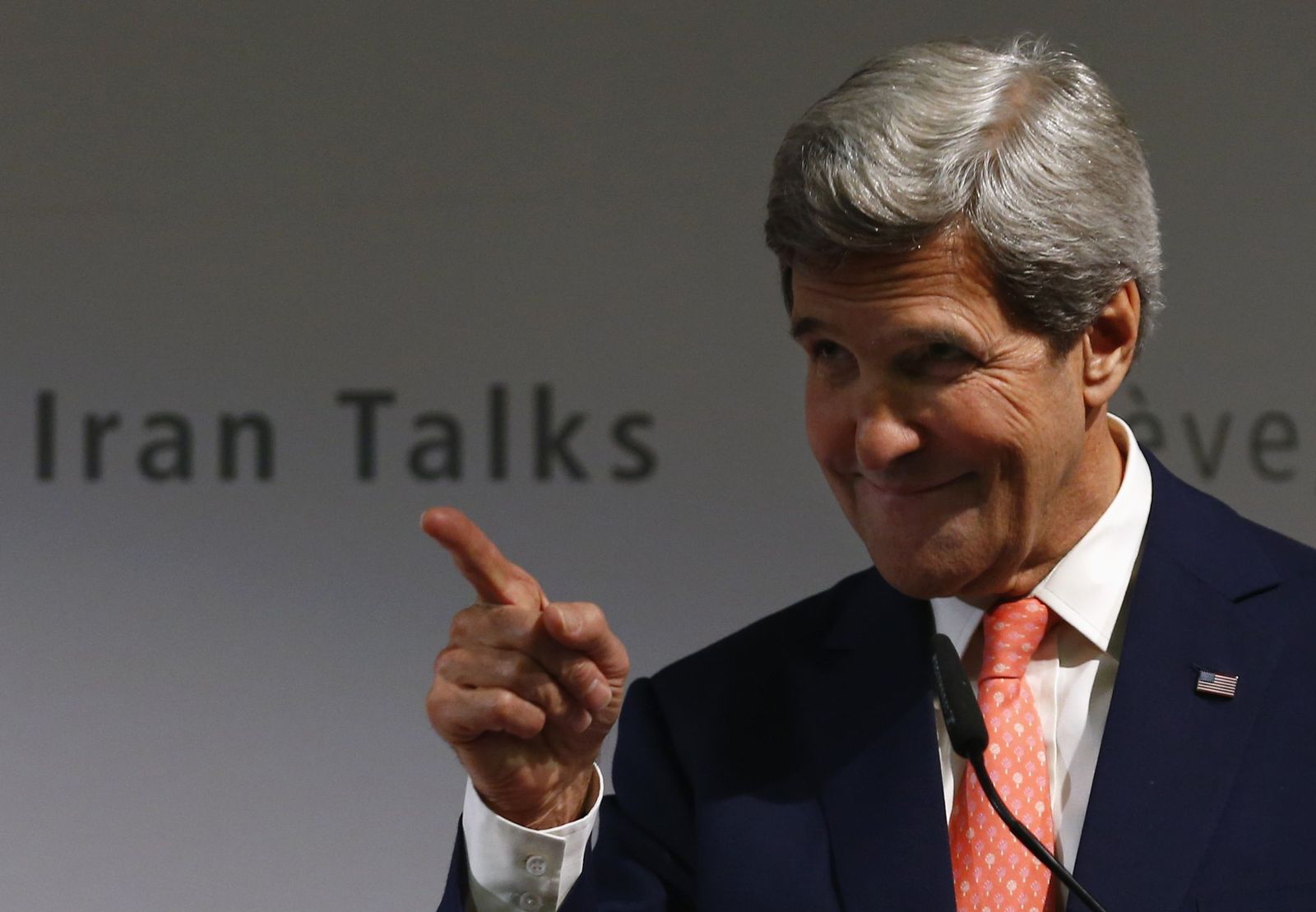 U.S. Secretary of State John Kerry gestures during a news conference after nuclear talks in Geneva: "We were very, very close."