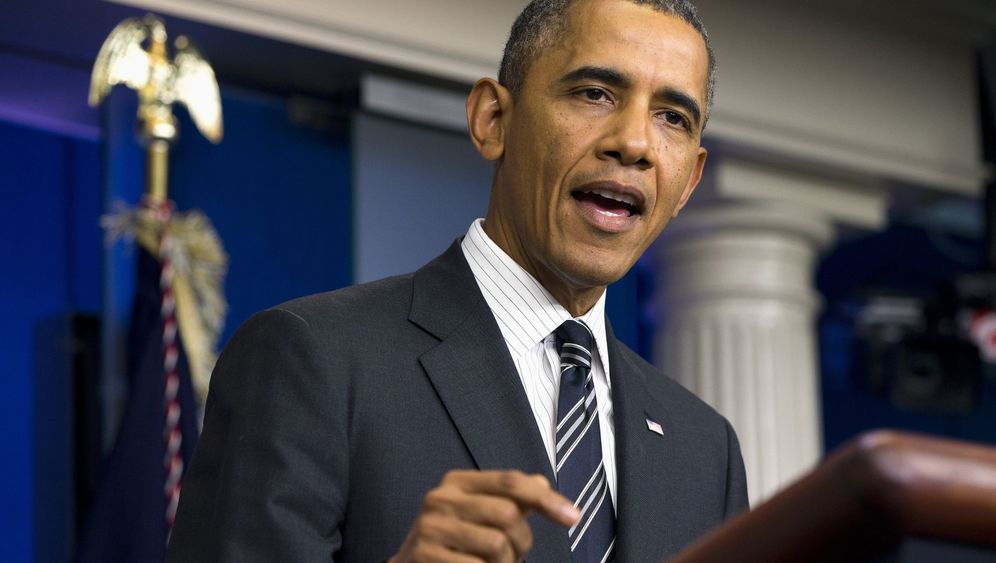 The historic moment was carefully choreographed. The foreign ministers of the five permanent member states of the United Nations Security Council, Russia, China, Great Britain, France and the United States, along with Germany, met at 4 p.m. on Thursday afternoon. After 15 minutes the host, European Union High Representative for Foreign Affairs Catherine Ashton, called Iranian Foreign Minister Mohammed Javad Zarif into the recently renovated Security Council Chamber. The Iranians shouldn't feel excluded -- but they shouldn't feel too much a part of the global community either.

Zarif, who lived in New York for many years, dispensed with the usual polite remarks. He said that he didn't want to waste any time, and that much had changed in his country as a result of recent elections. He told the assembled members that his mission was to peacefully resolve the conflict over Iran's nuclear program. He even suggested a timeframe, saying that a compromise could be reached "within a year," and that his country was "determined to make this possible." After his remarks, Zarif met privately with US Secretary of State John Kerry.

The encounter could mark a turning point in the history of the Middle East. Only once in recent years has a US secretary of state met her Iranian counterpart, when Condoleezza Rice "exchanged pleasantries" with Manouchehr Mottaki, Iran's foreign minister at the time, in Egypt in 2007. Otherwise, the relationship between the two countries has been characterized by 34 years of silence since the storming of the US Embassy in Tehran.

Now the contours of a peaceful agreement with Iran are becoming recognizable for the first time. There are also signs of hope in two other areas of conflict. Last week, the Security Council agreed on a draft resolution establishing a timeframe for the destruction of Syria's chemical weapons. In addition, US President Barack Obama declared peace negotiations between the Israelis and the Palestinians, along with Iran, to be a priority of his second term in office.

It took only a few words from Iranian President Hassan Rohani to usher in a new age: "Once the nuclear file is settled, we can turn to other issues."

The spirit of optimism, which seems too good to be true for some seasoned diplomats, is made possible by the unusual conditions in two nations that now have more in common than it would seem at first glance. President Rohani leads a country that is economically shattered after years of severe sanctions. Iran seems ready to assume a different role in the world.

Obama also leads a country that has become tired, after more than 12 years of war, and is now yearning for a respite.

The American president began his second term with the intention of making the American economy greener and the middle class more resilient against crises. He wanted to regulate illegal immigration and bolster his healthcare reforms. His focus was "nation-building here at home," said Obama, reiterating a promise he had made when he was reelected in November 2012. But then came the NSA scandal and the chemical weapons attacks in Syria, and now Obama has reluctantly shifted his focus from domestic reforms to foreign policy.

With the planned destruction of Syria's chemical weapons, the hopes for putting an end to the Iranian nuclear weapons program and the overdue peace negotiations between the Israelis and the Palestinians, he placed three blockbusters of international crisis diplomacy on the agenda last week. Suddenly it seems as if Obama wanted to save the world, after all.

What the New York Times called Obama's "evolving doctrine," which the president presented in his keynote speech at the United Nations, became an outline of the US president's foreign policy in his remaining years in office. It is not without substantial risk. It could turn Obama into a great statesman, a visionary who was able to at least partially pacify hot spots without military action. If it works, Obama will have earned the Nobel Peace Prize he was awarded in 2009. But his personal legacy isn't the only thing at stake. Obama is also risking America's dominant position, which has always consisted of a mixture of diplomatic strength and military superiority.

If Obama fails, he will not only lose his influence in the Middle East, but he will also have to accept that the threat of military violence against countries like Iran will lose its credibility, precisely because he so publicly chose to refrain from using such violence. In that case, as many Americans feel, he would be responsible for a disaster in foreign policy.

Return to the Israel-Palestinian Conflict

It was unexpected that Obama would try once more to take on the Israeli-Palestinian conflict, a challenge that had already proved too daunting for two Bushes, two Clintons and Obama himself. Expectations were low when Secretary of State Kerry brought the Palestinians and Israelis back to the negotiating table a few months ago. Kerry went to Tel Aviv, Amman, Ramallah and Cairo, spoke with all parties involved and issued both threats and incentives. It looked like another secretary of state was wearing himself out over a conflict for which there seems to be no solution.

Obama gave Kerry free rein. According to a diplomat from the State Department, the White House apparently reasoned that if Kerry failed, like all of his predecessors, it would be his personal defeat. Now the president has made the issue his own, perhaps because he realized that it would take the personal commitment of the world's most powerful man to lead the parties to compromise.

One reason this strategy is so risky is that Obama may soon be seen as a lame duck president, says Heather Conley, a policy expert who served as deputy assistant secretary of state. It is completely unclear how he expects to solve three major conflicts at once, conflicts that "have been ongoing for decades with little result," she says.

Shortly before his election in 2008, Obama quoted John Quincy Adams, the sixth president of the United States: "[America] does not go abroad in search of monsters to destroy," he said, noting that if she did, "she might become the dictatress of the world." Obama was strongly influenced by Adams' words. His advisers say that he still adheres to this view today.

Last week, Obama spoke as if he intended to transport Adams' legacy into the modern age. He said that there was no longer a "Great Game" to be won, as there was in the Cold War, and added: "Iraq shows us that democracy cannot simply be imposed by force."

'Danger for the World'

The America that Obama recently described to the UN delegates does not intervene in the affairs of other nations to overthrow regimes. It seeks diplomatic allies and avoids the use of weapons, if possible. "The danger for the world," Obama noted, "is that the United States, after a decade of war … may disengage, creating a vacuum of leadership that no other nation is ready to fill." But he added that there could also be exceptions that required military operations in the future.

According to former Defense Secretary Robert Gates, the president has drawn the right conclusions from past mistakes and has recognized that America's military campaigns have not achieved the desired results. "Haven't Iraq, Afghanistan and Libya taught us something about the unintended consequences of military action once it's launched?" Gates asks.

Iran's change of course comes at just the right time. The country's supreme leader, Ayatollah Ali Khamenei, is giving newly elected President Rohani an unusual amount of latitude -- which is not altogether surprising, since the ayatollah is equally aware of how the tough sanctions have choked Iran's already ailing economy. This explains why Rohani was able to employ such a moderate tone in New York.

Although the sanctions are "intrinsically inhumane and against peace," Rohani said, "nuclear weapons and other weapons of mass destruction have no place in Iran's security and defense doctrine." The usual sharp words against Israel were also absent. A member of Iran's Revolutionary Guard and adviser to Khamenei praised Rohani's speech as "clever and observant."

Many are pinning their hopes on two words attributed to Khamenei. Shortly before Rohani's appearance in New York, the revolutionary leader spoke of "heroic flexibility." But contrary to what many in the West assume, the ayatollah was apparently saying that relenting can be advantageous. He was using a metaphor from wrestling, Iran's national sport, when he said that in order to win, one sometimes has to exhibit certain characteristics "for technical reasons" -- malleability and flexibility, for instance. So is it all just a ruse meant to mollify the West only to ultimately triumph against them?

The Iranians' supposed change of course was also met with suspicion, especially in Jerusalem. Rohani had hardly left the podium before Israeli Prime Minister Benjamin Netanyahu called it a "cynical and hypocritical speech." The Israelis play a key role in the Middle East. Without them, there can be no Palestinian state, and an agreement with Iran would be difficult to achieve. Obama cannot reach two of his three goals without the Israelis.

When Obama threatened Syrian despot Bashar Assad with reprisal attacks for his use of chemical weapons more than four weeks ago, Netanyahu said that the "message that is received in Syria will be received loudly in Iran." But the political situation has changed fundamentally since then. Jerusalem feels that by striking a diplomatic deal with Assad, Obama has gambled away his threat potential against Tehran.

Which of these views is correct will soon become apparent. The round of negotiations over Iran's nuclear program will take place in Geneva in mid-October, with Zarif slated to head the talks. Russia, China and the West expect Iran to stop enriching uranium beyond 3.5 percent, to convert previously enriched material into reactor fuel rods unusable for bomb-making and, most likely, to close the Fordo enrichment facility near the holy city of Qom. The ability of the International Atomic Energy Agency (IAEA) in Vienna to readily inspect Iran's nuclear plants is a requirement, as is access to its suspicious military facilities, which was previously denied to the IAEA inspectors. In return, Tehran hopes the West will recognize Iran's right to enrich uranium and lift the sanctions.

Rohani promised an agreement in the near future, saying that it should be a matter of "months, not years." On Friday evening, Obama called Rohani for the first time and spoke with him for 15 minutes. The two men tweeted each other afterward, with Rohani expressing his gratitude for Obama's hospitality and the telephone conversation. Obama wished the Iranian a good trip home and apologized for New York's horrible traffic.

Meanwhile, there is talk in Tehran that revolutionary leader Khamenei has given Rohani until the beginning of Nowruz, the Persian New Year, in March to show palpable results. Apparently Iran's willingness to negotiate will end if no progress has been made by then. This would explain Rohani's sense of urgency.

Before he left the General Assembly Hall in New York, Obama turned around to face the audience one more time, as if to make sure that his message had been received. The Iranian delegates were sitting in the second row, on the right, while the Israelis were on the left side of the same row. The Syrians were seated six rows farther back.

The world has listened to Obama. Now it's time to wait for an answer.