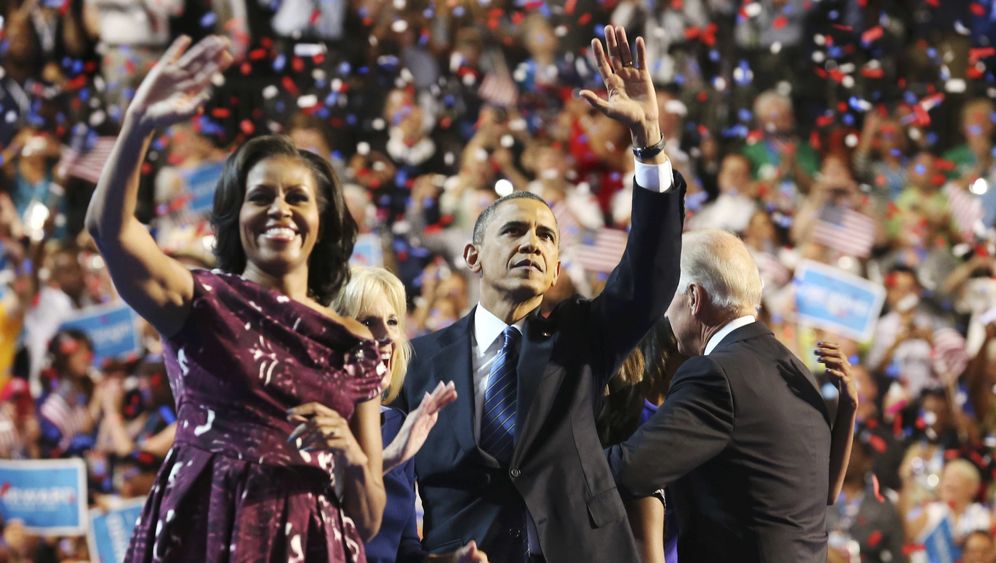 It was nothing like the soaring speech from four years ago. It was no dazzling, history-making address, no major pitch, no inspirational oration leaving listeners with goose bumps. And it was far from the ferocious takedown of his opponent that Bill Clinton had delivered the previous evening.

No, the speech that President Barack Obama delivered on Thursday evening at the Democratic National Convention in Charlotte, North Carolina, advocated for a second term in office without making use of streamers and garlands. Of course, it ended in a typically rhythmic climactic closing, but it was also very sober. It was combative but serious, at points defensive and almost introspective.

"And while I'm proud of what we've achieved together, I'm far more mindful of my own failings," Obama said. Then, he very simply asked for more time to solve the nation's problems.

But perhaps this was exactly the speech that he had to deliver now. The 2008 election is far behind us, and then came the great crash of the recession. Americans don't want to listen to a preacher now; they want a pragmatist. "The times have changed," Obama said, pausing to add, "and so have I."

The high-flying Obama deliberately chose to keep his feet on the ground. Four years ago, he courted voters under the banner of hope. "Eight years later," he said, "that hope has been tested."

The speech was heard by 22,000 enthusiastic Democrats gathered in the Time Warner Cable Arena. They wanted to show the president their love and repeatedly interrupted his speech with chants of "Four more years! Four more years!" But, this time around, the tears seen in Denver's Mile High Stadium in 2008 were few and far between.

Of course, that might also have something to do with the venue. Plans had originally called for Obama to speak before 74,000 fans in the outdoor Bank of America Stadium. But threatening storms forced him into the much smaller arena. There, his words quickly bounced off the walls -- both literally and figuratively.

During his speech, Obama touched on the issues of education, taxes and the national debt. "This feels like a State of the Union -- not a convention rallying cry," conservative blogger and Obama fan Andrew Sullivan wrote as he followed the speech live. But that is hardly a coincidence: Obama has his base in his pocket. Instead, he is appealing to the so-called "independents," the swing voters who are more pragmatic than ideological, and who want to hear something concrete rather than lofty rhetoric.

At the moment, no one can say whether Obama's speech will work. But one thing is certain: The only thing that people still remember about last week's Republican National Convention is the bizarre monologue that Clint Eastwood held with an empty stool, and no one is talking about Mitt Romney's speech anymore. When it comes to the Democratic convention, Bill Clinton's tour de force will surely stick in people's minds more than Obama's speech.

When the delegates dispersed after the speech, they were fired up and affirmed -- but not particularly inspired. Here are some reflections on the key points of Obama's speech and the convention:

Four years ago, Obama courted the ethnic melting pot of America as the first "post-racial" candidate. But, this time, his speech targeted the group of voters that will hold his fate in their hands come November: the members of the shrinking middle class who have been hart-hit by the recession.

For this reason, the auto industry was one of the first things he mentioned -- the "workers in Detroit and Toledo who feared they'd never build another American car," adding that his administration "reinvented a dying auto industry that's back on top of the world." He proudly evoked the "Made in America" seal, praised "big factories and small businesses," and vaunted education as the "the gateway to a middle-class life." He also promised tax reform and praised state-provided health insurance for the elderly.

The theme of the middle class had already been part of the whole program that came before his address, through the blurry videos and the endless speeches. It was mainly found in the one delivered by Vice President Joe Biden, who played the "average Joe" so as to lend Obama some of his everyman appeal.

For years, the Republicans had claimed foreign and security policies as their own and were able to deride the Democrats as military wimps. But now the tables have turned. During the Republican convention in Tampa, Mitt Romney and Paul Ryan, his running mate, made the fatal mistake of saying almost nothing about the military and defense policies.

The Democrats charged into this void. The speeches at their convention made repeated mention of soldiers and veterans and praised Obama's military achievements. This was especially true on the convention's final evening, when the name of Osama bin Laden was mentioned almost as much as the president's. Senator John Kerry, a decorated Vietnam veteran and the Democratic nominee in 2004, delivered a grand foreign policy speech with which he perhaps positioned himself to one day succeed Hillary Clinton as the head of the State Department. "Osama bin Laden is dead," Biden also noted in his speech, "and General Motors is alive."

Obama also devoted large segments of his speech to the issue -- and made fun of his rivals. "My opponent and his running mate," Obama said, pausing for effect, "are new to foreign policy." Soon thereafter, he added: "After all, you don't call Russia our number one enemy -- and not al-Qaida -- unless you're still stuck in a Cold War time warp."

During his speech, Obama used the word "choice" 10 times. He tried to present a clear dichotomy between himself and Romney, and portray the election as one that will determine the country's destiny. The Republicans view this as a trick and are fighting to define the 2012 election in other terms. They want voters to view it as a referendum on the US economy and the man at its helm.

"When all is said and done -- when you pick up that ballot to vote -- you will face the clearest choice of any time in a generation," Obama said. "It will be a choice between two different paths for America. A choice between two fundamentally different visions for the future."

• The Art of Omission

The things that Obama didn't mention in his speech are also striking. These were his weak points, the issues that he believes he can't score any points on, such as arms control. He also only fleetingly touched upon his own accomplishments, such as health care reform or the disputed stimulus package that prevented an even more severe economic crash. Such issues are simply too controversial among the voters he is trying to woo.

Obama also more or less ignored the employment situation, which should come as no surprise. Friday morning will see the release of the most recent monthly figures for the US labor market. Some experts expect that they will be good. Obama always gets a chance to look at the figures on the eve of their publication, which he might have also done in Charlotte. But he didn't say a thing about them. Was he saving the good news for Friday?

In any case, Obama will already be somewhere else on Friday. He will leave Charlotte in the early morning and launch a whirlwind campaign tour through several swing states. On Friday alone, he will make stops in New Hampshire, Iowa and Florida. Next week will see him in a number of other places, including Colorado and Nevada.

At the close of Obama's speech, there were not the fireworks planned for the stadium or the red, white and blue balloons that are usually dropped in arenas. Given the quick change in venue, there was just no time to organize it. Instead, the event's planners used some confetti cannons. But the scene was starkly different from the gigantic celebration of 2008.

As Obama said himself: "The times have changed." The convention was yesterday. And the election battle will not wait.