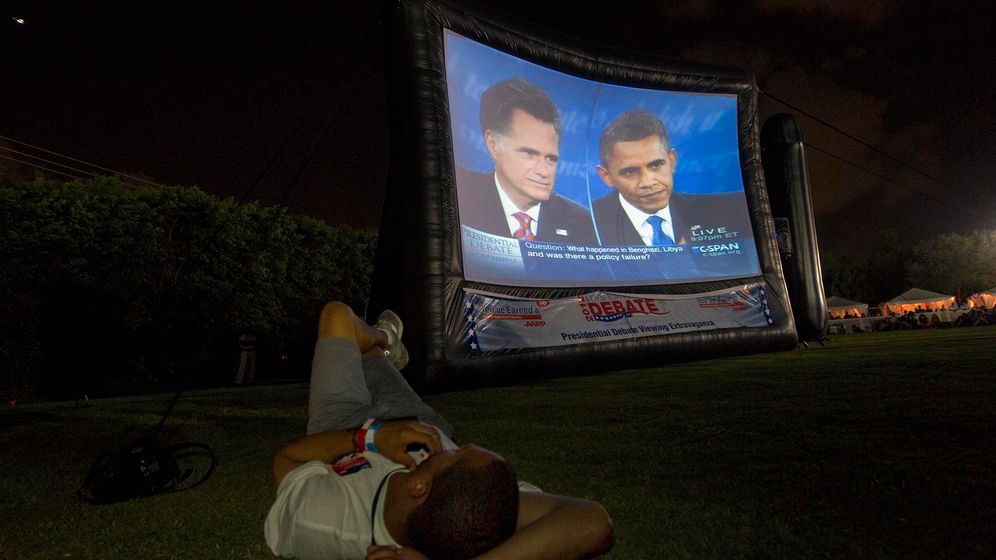 Ed Luce, the sage Financial Times columnist, knows from his country's own history all about the decline of global powers. A Briton who loves America, Luce has sought to provide the United States with well-meaning counsel, most recently in the form of a book with the whimsical title "Time to Start Thinking." The tome is nothing less than a 320-page appeal to the US to finally face up to future strategic challenges inherent in a rapidly changing world order -- so that America's decline might remain but a horror scenario.

After the 90-minute-long foreign policy debate on Monday night between US President Barack Obama and his Republican challenger Mitt Romney, several questions remain unanswered. One, however, has been cleared up: Neither Obama nor Romney have read Luce's book.

The two contenders for what is likely the world's most powerful office left little time for thinking -- either for themselves or for the television audience. And they failed to adequately address the new challenges facing the wobbly global power America -- climate change, for example, which was left unmentioned in presidential debates for the first time since 1984. Or the rise of Asia. Or even the lack of domestic investment in infrastructure and education.

Most of all, however, in the debate in Boca Raton they declined to discuss how they intend to address the country's central foreign policy conundrum: Americans no longer want their country to be a global police force, but they still want to continue believing in American exceptionalism.

Instead, viewers were witness to a phenomenon that Luce had likewise predicted: Romney and Obama exchanged carefully prepared platitudes as though they were trapped in a world order created for them by White House predecessor George W. Bush.

The two adversaries talked about Libya, Syria, Afghanistan, Iraq and the broader Middle East. And they of course also engaged in the petty discussion as to who visited Israel or American troops abroad sooner.

If Obama had ever hoped to leave these issues of yesteryear behind and devote himself to new challenges brewing elsewhere, most prominently in Asia, it is a hope that was dashed in recent weeks. Since the death of US Ambassador Christopher Stevens in a suspected terrorist attack in Benghazi, Libya, Romney has been on the attack, saying that while much of Obama's foreign policy is correct in principal, its results are a failure. The most significant example according to Romney: The al-Qaida terrorist network has in no way been weakened, but remains dangerous.

Indeed, it appears as though Stevens' death in election year 2012 has been enough to overshadow the killing of Osama bin Laden and several other top terrorists from al-Qaida and other networks. It has been enough to keep America fixated on the war on terror and preoccupied with the Middle East.

The paradox of this fixation shown by both candidates is that neither Obama nor Romney have shown a real interest in the Muslim world. Despite overtures early in his term, the president did little thereafter to ensure that progress was made. The only regional issue that appears to be high on his priority list is Iran's nuclear program. Romney's plan for the region appears to consist almost entirely of unconditional support for Israel. Both candidates want to continue using drones unhindered.

More than anything, however, both Obama on the left and Romney on the right are focused on winning the support of a public that is tired of war, a public that is largely united in the wish to reconstruct their own country rather than nations abroad. That is understandable for a country in crisis. But it is also a crisis for a great nation.

In the Monday evening debate, it took almost 80 minutes before Obama, during the discussion on China's growing global influence, noted that America too must invest more in its future, rather than becoming bogged down -- at great expense -- in the Middle East.

By then, though, most viewers had likely ceased paying close attention. That, too, is part of the current American dilemma. The US media, fixated as it is on Twitter and the back-and-forth of the long campaign, quickly becomes bored with the big picture. And viewers do too -- this author included. "If Americans weren't bored by foreign policy before this debate, they will be after," foreign policy pundit Peter Beinart tweeted during the broadcast.

Romney's advisors are fully aware of the mood in the country. They counselled their candidate to avoid aggressive attacks and detailed discussions. More important, they said, was to appear harmless and folksy. And he did his best. Instead of repeating his infamous line that Russia is "without question our No. 1 geopolitical foe," Romney simply smiled when Obama accused him of wanting "to import the foreign policies of the 1980s."

The president meant the line as a sardonic reproach and it likely helped him win the Monday night debate in the eyes of its viewers. But it leaves behind a stale aftertaste. After all, following the 90 minutes of debate in Boca Raton, 1980s US foreign policy seems modern and cosmopolitan by comparison.