It was the night of grand sentiments. America reverberated with Democratic passion. Even John McCain, the defeated Republican contender, called him "my president." It was the strong departure of a weak candidate. 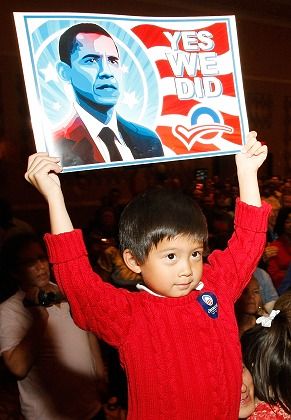 Barack Obama wasn't elected as 44th president of the United States because of his political platforms. Hillary Clinton was more precise, John Edwards more aggressive, McCain more experienced. But none of them hit the Obama tone, the tone of our age.

His base note is conciliatory, his overtone is exalted and the harmony is finely balanced. If anyone out there still doubted that the American dream was alive, he called out to his supporters in Chicago, "tonight is your answer."

"At this defining moment," he declared, "change is coming to America."

Obama's tone embraces people, it doesn't exclude them. It's a tone of political romanticism. It doesn't solve problems, but it lessens the pain. Where Bush stoked fear, Obama spreads calm.

The tone itself only accounts for half of his success, though. The surroundings determine whether it resonates. In the self-satisfied, successful America of the 1990s, Obama's tone would have been dismissed as too soft and too quiet. The victory over the Soviet Union had to be celebrated. America wanted to be loud.

Obama Wouldn't Have Stood a Chance in 2004

Even in 2004 someone like Obama would scarcely have stood a chance of winning the White House. America was already at war but still had hopes of victory. The economy was doing well too. A presidential candidate pushing for a change in the White House needed to push a bit harder than John Kerry did.

But in 2008 the economy is sputtering. To describe conditions in America today as "social inequality" is a blatant understatement. Almost 50 million people don't have health insurance. Around 30 million live off food stamps issued by the state.

At times one has to muster all one's reason to avoid turning into a socialist.

America has fallen silent, and Obama penetrated this silence with his message of hope and change. Conciliation, not confrontation is his message to an unsettled country. He doesn't use the word "compassion" with which German Chancellor Willy Brandt enchanted a generation. That word has lost its ring in America since George W. Bush described himself as a "compassionate conservative."

Obama doesn't need to use the word, it is in the tone of his voice. He has promised to sympathize, to listen, to deliberate. The others say "I want;" he says "we will." What a contrast to his predecessors. Bill Clinton often sounded like a hyperactive master of ceremonies. George W. Bush had a metallic sound in his voice from the start. He went looking for all the trouble he got. By the end of his presidency, Bush had turned gray and no one listened to him anymore.

This election also amounts to a pledge by the Americans to the rest of the world. Twice, and with an increasing majority, voters elected George W. Bush. Last night they embarked on a turnaround.

An Offer of Reconciliation to the World

Obama is America's offer of reconciliation after all those years of premeditated political provocation, of military action not backed by international law, of America's claim to be entitled to military pre-emptive strikes. The Bush doctrine was scrapped last night. The unilateralist stance of the Western superpower is likely to be over for now.

As the new day dawns in Germany, America is once again dreaming the American dream. It will be a deep, soulful dream after all these restless, dreamless years of terror attacks, reports from the Baghdad front and the collapse of Wall Street. It's a dream about a world without poverty or fear, of a life full of opportunity and devoid of George W. Bush.

But when America's voters wake up, the old problems will be standing at their bedside. The endless Iraq war, the spreading financial crisis, the political and cultural division of America. Bush may be moving out of the White House, but the problems he created will be more difficult to evict.

The new occupant of the White House must change himself before he embarks on changing the world. He has to mature from an election campaigner to a government leader in the space of months. The new tone may be his promise. But no one knows if he can keep it.