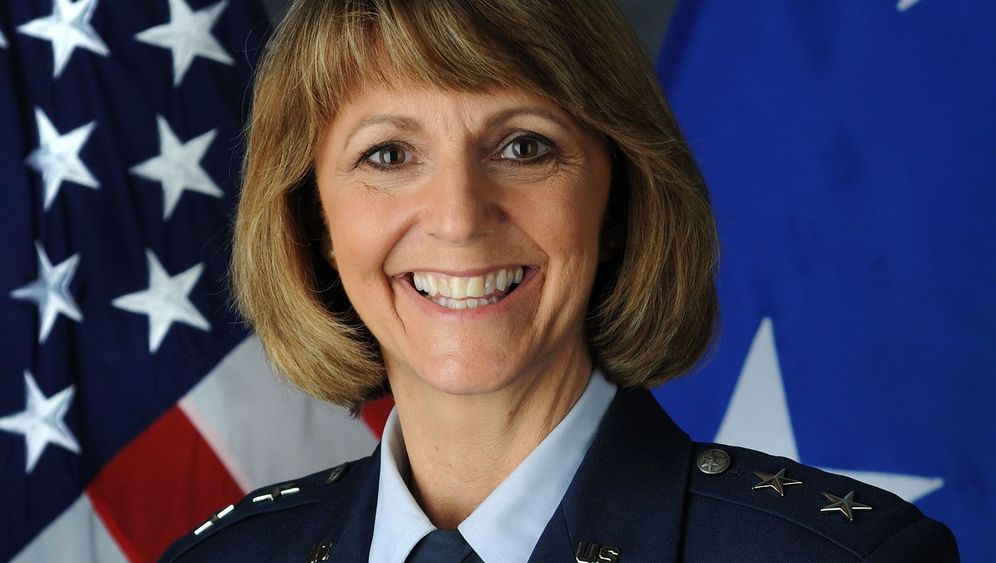 Photo Gallery: Margaret Woodward on the US Air Force

SPIEGEL ONLINE: General Woodward, congratulations. You now have your own Wikipedia page, which was set up a few days ago.

Margaret Woodward: Thank you. I barely had time to read it yet.

SPIEGEL ONLINE: How do you view Operation Odyssey Dawn, now that it's over?

Woodward: It was a success. There's no doubt that we did everything that we were asked for -- to establish a no-fly-zone and to keep Moammar Gadhafi from being able to attack his own people. He's not flown (any attacks) since March 19.

SPIEGEL ONLINE: The front in Libya appears hardly to be moving any more, though. It looks like a stalemate between the rebels and Gadhafi's forces is emerging.

Woodward: Gadhafi's air defense system is completely damaged and we have been able to protect the civilians to a great extent. When you look at where we were when the resolution was passed: Gadhafi's forces were bearing down on Benghazi. I still remember I was very concerned about our ability to turn them back and to protect 700,000 people that for sure would have been massacred if Gadhafi's forces had been allowed to enter the town. So I'm very proud of what we've been able to accomplish.

SPIEGEL ONLINE: How do you command an air war 2,000 miles away?

Woodward: How much time do you have? I'll try to make it as compact as possible. It's like an orchestra -- there's really no solo out there. Here at Ramstein we have the Air Operation Center that schedules the tanker aircraft, to make sure everyone has got fuel for the fight. The ISR aircraft provide us with information about the situation on the ground. They help us with our targeting efforts and how effective our targeting was. Basically that's all done by radio satellite communication. It was very important that we have these incredibly professional and dedicated folks. Some of them worked way over their straight hours to solve this conflict. Everything was at very short notice.

SPIEGEL ONLINE: What did a typical day during the operation look like?

Woodward: We started the day with my intel update, that would be about 6 o'clock in the morning, followed by the staff briefing at 7 o'clock in the Air Operation Center. They would cover everything from the intelligence update, to the weather update, to damages from the previous day, to the strategy for the coming day, priorities for targets for example. At 8 o'clock we would cover much of the same information on a higher level, in our meeting with Admiral Sam Locklear on the USS Mount Whitney (editor's note: an amphibious command ship in the Mediterranean) and we would develop the so-called "Master Air Attack Plan." At 10 o'clock the "Air Tasking Order" went out to all the aircraft wings and told them what they are supposed to fly.

SPIEGEL ONLINE: Do you understand the position of the German government not to join the alliance for a no-fly-zone?

Woodward: Every single one of us understands that every nation has their own national interest and has to make a decision based on that. I can tell you that it was an incredible thing for us to have the coalition partners. Each and every one of them was important for the fight. Here at Ramstein more than 400 people were coming together. They are so well trained and such dedicated professionals that I think on the outside they made it look pretty easy.

SPIEGEL ONLINE: When you became commander of the 17th Air Force and US Air Forces Africa in June 2010, did you ever expect to command an air war in Libya?

Woodward: I don't think any of us involved in that conflict expected that, we worked hard to avoid it becoming a conflict. But we always have to be prepared for everything what might come around.

SPIEGEL ONLINE: In most official photographs you seem to be the only woman in a uniform. Is the Army still a male preserve?

Woodward: The US military is very "gender open." We are allowed to compete on a very equal basis. I never felt held back because of my gender. In the end what counts are the leadership abilities you have. I think other folks are making a bigger deal out of it than it is -- within the military it's not an issue.

SPIEGEL ONLINE: You joined the Air Force at the age of 22 and spent decades flying. But your current rank involves a lot of office work.

Woodward: I still do fly, I just got qualified for the C-130J Super Hercules (editor's note: a military transport aircraft). Unfortunately, I've not been able to fly recently because of all the events.

SPIEGEL ONLINE: Why aviation, why the Air Force?

Woodward: I don't even know where it started. As long as I can remember I always wanted to fly. Maybe it's because of my grandfather -- he flew in World War I. I wouldn't trade the Air Force for the world.

SPIEGEL ONLINE: Not even for a job in politics, like former US Secretary of State Colin Powell, who attended the same college as you?

Woodward: I can honestly tell you: Absolutely not. Nothing is further from my interest and my abilities. I don't see that as an option. The thing that kept me in the Air Force is the folks I work with -- the people, the airmen you are able to command. They are the most incredible people I can imagine. When you watch their dedication and their expertise -- there's no way to describe the emotion and the pride you feel. I'm just very proud to be part of a team like that.

SPIEGEL ONLINE: There are more troubled regions in Africa than Libya. Are further military interventions possible in the nearer future?

Woodward: Our focus will always be: being good partners with Africa and doing everything we can to support them, to prevent a crisis becoming a conflict. I think we will continue to do so. We have obviously been keeping an eye on Ivory Coast. We are happy that we have UN peacekeepers there and know that they will do excellent work.

SPIEGEL ONLINE: When will the conflict in Libya will be over?