By all accounts, this ought to be a triumphant day for John Calder. The graying director of the US National Oceanic and Atmospheric Administration's (NOAA) Arctic Research division spent four years writing his report titled "Arctic Oil and Gas" -- together with 150 scientists with the Arctic Monitoring and Assessment Program (AMAP). And now it's finally time for Calder to publicly present his first summary of the report. His presentation in the large auditorium at the University of Tromsø is the highlight of the Arctic Frontiers Conference, at which 500 experts will spend the remainder of the week discussing the outlook for oil and gas production in the ever-warming Arctic. 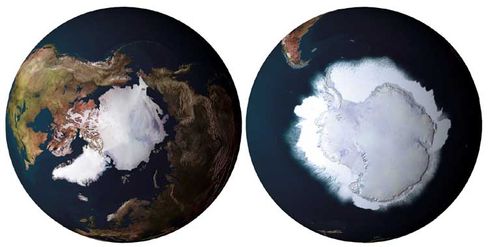 Arctic environmental perils: In the colder environment, it could be harder to clean up tanker spills or leaks from faulty pipelines.

"All nations with territory bordering the polar region are working overtime to exploit their oil and natural gas reserves in the Arctic," says Calder, as small beads of sweat collect on his forehead. But it is high time, he adds, to systematically address the potential dangers and problems. "We have compiled a document summarizing the facts on oil and gas production in the Arctic."

Among other things, Calder's report warns against the dangers posed by faulty pipes and tanker accidents. "Oil spills are especially dangerous in the Arctic, because its cold and heavily season-dependent ecosystems take a long time to recover. Besides, it is very difficult to remove the damage from oil spills in remote and cold regions, especially in parts of the ocean where there is ice." Calder also criticizes the destruction of landscapes that comes with building pipelines and describes the way Arctic villages would change once the oil money upends all traditional social structures.

The Phrase Climate Change" Is Unwelcome

But despite these commendable warnings, there is a significant problem behind the work of Calder and other scientists: it has been devalued by political wrangling. Until recently, the summary ended with more than 60 recommendations the scientists had compiled for politicians. Those recommendations have since disappeared.

The modifications are the result of quarrels within the Arctic Council, which commissioned the AMAP study. Unanimity is required between the permanent members of the Council, which include the Scandinavian countries, Iceland, Canada, the United States and Russia -- but Sweden and the US were opposed to the document. Sources at the Tromsø meeting said the Americans didn't even want the term "climate change" to be used in the final report.

This has left Calder with the task of presenting a paper filled with platitudes and devoid of clear recommendations for action. "I am disappointed," he admits. In addition to the Arctic Council members, many oil companies made life difficult for the scientists, even refusing to provide them with data they had requested. Russian companies, for instance, offered very little information about oil spills. "We believe," says Calder, "that Russia has large amounts of data on the effects of oil accidents on Arctic regions -- and on how it can take decades for them to recover." This sounds convincing. Russia, after all, is responsible for the lion's share of current Arctic production. Russian companies produce 80 percent of Arctic oil and 99 percent of Arctic gas.

Precise data on environmental problems is rarely made public, and in most cases only when they have already reached nearly apocalyptic proportions. One such case happened in 1994, when a pipeline ruptured in 23 locations in Russias Komi region, spilling more than 100,000 tons of oil into vulnerable Arctic ecosystems. Areas that were not contaminated right away were damaged during the hectic cleanup operation.

US pipelines have also seen their share of problems. A year and a half ago, oil conglomerate BP was forced to shut down its operations in Alaska's Prudhoe Bay after a leak was discovered in a corroded pipeline.

Despite all the risks to the environment, the oil companies continue to push northward. "The Arctic will assume a significant share of global energy production," predicts Halwor Engelbretsen of Norwegian oil giant StatoilHydro. The region, says Engelbretsen, adjoins the world's three most important energy markets: Europe, North America and Asia.

Oil from the Arctic is, in fact, doubly attractive for these customers. This is partly the result of constantly rising gasoline prices that are being met with growing concern among drivers at the pump. Arctic oil's attractiveness also stems from geopolitical pressures on European and North American countries eager to reduce their dependency on the supply of energy from the Gulf region. The Arctic promises price stability and a decline in the role of politically unreliable allies in countries all too often controlled by autocratic regimes.

New Technologies for the Arctic Adventure

Still, the extent of the oil and gas reserves that actually exists in the Arctic remains unclear. According to a frequently cited study by the US Geological Service (USGS) completed in 2000, one-quarter of all undiscovered oil and gas reserves on earth lie beneath the ice of the Arctic. But this impressive figure is not undisputed, especially given the USGS experts' reputation for having a fondness for delivering optimistic estimates. In the 1990s, they predicted an oil boom in the Caspian Sea, but nowadays experts believe that the region's actual reserves are only about one-eighth as big as the USGS's original estimate.

"There is a lot of optimism about the resource potential in the Arctic" says Elisabeth Walaas, State Secretary in the Norwegian Foreign Ministry -- notwithstanding the fact that the USGS estimates "tend to be vague." To avoid putting themselves on the spot once again with inflated numbers, the US scientists plan to publish an updated version of their estimates this year.

The production technology needed in the Arctic, at any rate, is already well advanced, as a project in far northern Norway illustrates. StatoilHydro produces natural gas in a fully-automated plant on the continental shelf in the Barents Sea, at a depth of more than 300 meters (984 feet) below sea level, about 145 kilometers (90 miles) off the Norwegian coast near the city of Hammerfest.

The plant, dubbed "Snøhvit," or Snow White, is considered a prototype for fully automated underwater production -- and even figured prominently in German novelist Frank Schätzing's bestseller "The Swarm." The gas is pumped through a 70-centimeter (28-inch) pipeline from the ocean floor to a terminal on Melkøya Island, where it is cooled, liquefied and loaded onto tankers. But Snow White is still suffering from growing pains, as visibly stressed StatoilHydro employees readily concede.

StatoilHydro authorities were forced this month to submit a request to parliament for an increase in the amount of carbon and soot the company can emit into the atmosphere at the Melkøya terminal. Start-up emissions at the plant have been greater than expected, placing a government keen on presenting itself as environmentally progressive in an awkward position, according to the English edition of the Norwegian daily Aftenposten. Critics are concerned the emissions represent a greater risk to the environment because of the facility's Arctic latitude. A failure of the project, though, would be disastrous for the company's ambitious Arctic adventure.

'An Uparalleled Level of Ecological Sensitivity'

Meanwhile, John Calder remains perplexed. His report, originally intended as a milestone in the development of the Arctic oil and gas industry, could end up being largely ignored because its most important section, the recommendations for action, is missing.

"Risks cannot be completely ruled out," the authors write in the penultimate chapter of the AMAP report. It is statements like these that have prompted the environmental organization World Wildlife Fund, which presented its own report in Tromsø on the risks of oil accidents in Arctic environs, to call for an end to exploration for new oil and gas reserves in the Arctic.

"The Arctic has an almost unparalleled level of ecological sensitivity and one of the lowest levels of capacity in terms of cleaning up after an accident," said James Leaton of WWF's chapter in the United Kingdom.

The head of the group's international Arctic program, Neil Hamilton, warned that those factors should be considered in any risk equation used to determine whether drilling should happen there.

"The fact that a catastrophic spill might exceed the operating limits of existing oil spill response technologies is a strong argument for a moratorium until the response gap is filled," he said.

But that demand is likely to remain little more than a fervent wish.