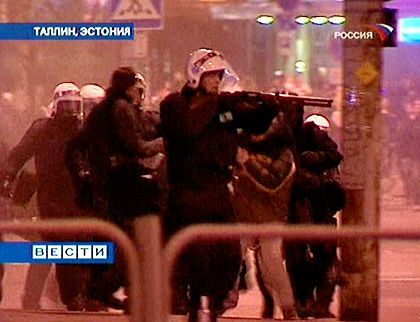 Thousands took to the streets in Estonia in April in a riot sparked by the government's decision to move a memorial to the Soviet army.

A bickering match between Russia and one of its Soviet-era allies, Estonia, may have spilled over into cyberspace. NATO, at least, has been worried enough to send cyber-terrorism experts to the capital of Tallinn to investigate a major three-week "denial of service" assault on both official and private Estonian Web sites as well as the country's cell phone networks.

Estonia says the attacks -- which involve massive volleys of data fired at the servers of government ministries, newspapers, banks, and other corporations with the intention of crashing their sites -- originated in Russia. The EU and NATO have been careful not to accuse Moscow, and Russia's ambassador to Brussels, Vladimir Chizhov, told the Guardian in Britain that any claim of cyber-warfare was "a serious allegation that has to be substantiated."

The attacks are bound to be a topic of conversation at an EU-Russia summit on Friday, especially since there may be little else to talk about. Two other former Soviet nations, Poland and Lithuania, have sworn to veto formal negotiations toward a trade and energy agreement between Moscow and the EU because of their own disagreements with Russia.

Bickering Over a Statue

Estonia provoked Moscow's ire on April 27 when it moved a Soviet war memorial from one part of Tallinn to another. The bronze statue of a Russian soldier marked the graves of Russians who had died fighting the Nazis. Estonia moved the statue as well as the remains to a military graveyard -- away from the city center -- saying it attracted fanatics. Russia accused Estonia of trying to revise World War II history by showing more honor to Estonian nationalists who had collaborated with the Nazis than to the Soviets.

Moving the statue also inflamed tempers within Estonia -- riots and looting in Tallinn among ethnic Russian Estonians killed one person and injured about 150.

The cyberattacks started after the riots. They came in waves, peaking around significant dates like May 8 and 9 (V-E Day, a major holiday in Russia). Hackers can orchestrate "distributed denial-of-service" assaults from computers all over the world; in fact they need a vast host of machines to send the volumes of data needed to overwhelm server and bandwidth capacities for the targeted sites. Estonian officials claim that some attackers were traceable to Kremlin institutions.

"When there are attacks coming from official IP addresses of Russian authorities and they are attacking not only our Web sites but our mobile phone network and our rescue service network, then it is already very dangerous," said Estonia's foreign minister, Urmas Paet, to The Times of London. "It can cost lives. I hope they will stop it but the attacks are continuing."

Kremlin spokesman Dmitry Peskov told the BBC that the allegations were "completely untrue."

An unnamed NATO official said to the Guardian, "I won't point fingers. But these were not things done by a few individuals. ...This clearly bore the hallmarks of something concerted."

Estonia is a NATO member, but NATO doesn't define cyber-assaults as warfare, for the simple reason that significant denial-of-service attacks by one government on another are so far unknown. "This means that the provisions of Article V of the North Atlantic Treaty, or, in other words, collective self-defense, will not automatically be extended to the attacked country," the Estonian defense minister, Jaak Aaviksoo, told the Guardian.