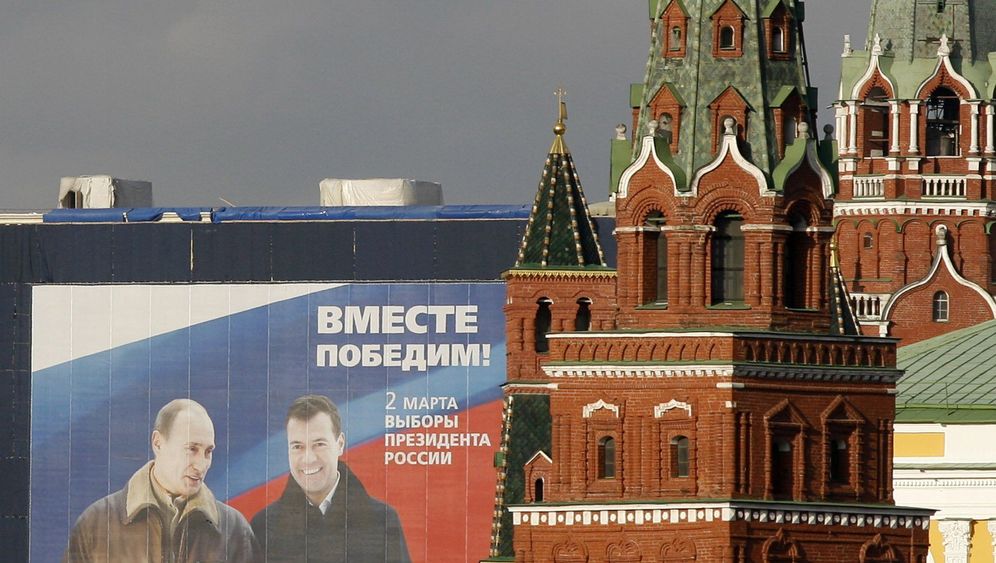 Photo Gallery: A Challenge to Putin

Before Mikhail Prokhorov leaves his mansion on the outskirts of Moscow to embark on his campaign, he has to walk past a black panther. The panther, made of heavy plastic, stands in the lobby, next to the door, like a guard dog.

With a net worth of $18 billion (€13.7 billion) Prokhorov, 46, who has been an oligarch for almost two decades, ranks 32nd in the list of the world's richest people compiled by American magazine Forbes. This has brought him many enviers and some enemies in his native Russia, while in the West he is seen as a predatory capitalist.

"Forget the panther!" he says as he walks out, carrying a gym bag. "A designer did the interior decoration." If anything, he says, he is a lion, a king who brings order to the realm and is willing to take responsibility.

Prokhorov lives in a 2,000-square-meter (21,520-square-foot) house, with a waterfall next to the swimming pool in the basement, and with two gold-plated cellos in the living room. A Maybach and several Mercedes limousines are parked in front of the mansion, which took five years to build.

A few months ago his friend, opposition politician Boris Nemzov, wanted Prokhorov to put an anti-Putin sticker on his Maybach. "Vote the government of thieves out of office, vote against all of them," the sticker read. Prokhorov, unwilling to venture quite that far, turned him down.

Prokhorov likes to buy toys: a yacht the size of a warship, a private jet, a basketball team in the United States and, for €25 million ($33 million), an island in the Indian Ocean. He earned his fortune after the collapse of the Soviet Union, mainly through the privatization of mining giant Norilsk Nickel. Today he controls energy companies, insurance firms and banks through his investment holding company Onexim.

Now he wants to become a politician as well, and is already aiming for the top job. Last Wednesday, authorities in Moscow approved Prokhorov as a candidate in the presidential election scheduled for early March. They rejected the application of Democrat Grigorij Javlinski, stating that many of the two million signatures of supporters he submitted were invalid.

In Prokhorov's case, the question arises whether he is merely the Kremlin's latest puppet, selected and approved as a candidate with Putin's blessing, in an effort to placate the high-income, Internet-savvy Moscow protest movement. Or could the oligarch be pursuing his own goals after all, and be planning to unseat Putin sooner or later? Prokhorov himself says only that he has never been anyone's project.

"I am one of you," Prokhorov tells students and young entrepreneurs in the conference room of the most expensive hotel in Kazan. It is his first appearance as a presidential candidate far away from Moscow, in the central Russian Republic of Tatarstan. On the way there, he studied some of the documents his staff had prepared for him but spent much of his time reading a sports newspaper. Now, dressed in a gray suit with a bright red tie, he is standing beneath chandeliers and explaining a platform that has little in common with Putin's ideas.

Criticizing Putin's System, Not Putin Himself

Prokhorov wants a strong society and less government. "We are taxpayers and independent citizens," he says, "and we are prepared to take our lives into our own hands." He promises to facilitate the approval of opposition parties and to privatize the state-controlled media. He also wants to limit the tenure of the president, the cabinet ministers and all elected civil servants to a maximum of two terms in a lifetime. Everyone in the room understands that this demand is directed against Putin, who is running for a third term as president. But Prokhorov never criticizes Putin directly.

A young woman asks what Prokhorov thinks about the Moscow protesters' "Russia without Putin" slogan.

"I am for a Russia with everyone," he replies, "with Putin, but also with the leaders of the protest movement, like the writer Boris Akunin and the blogger Alexei Navalny."

Then he continues with his criticism of the current system. "We need tough and honest competition," he says. Putin has coddled state-owned companies and pushed back private businesses. Prokhorov calls for the privatization of state-owned companies, and he says he would start by breaking up energy giant Gazprom, which Putin uses as a tool in his aggressive pipeline policy. Prokhorov's remarks can clearly be interpreted as a declaration of war. Are these the remarks of someone who is in the pocket of the Kremlin?

The state-owned television network, which is loyal to the administration, has just painted the new United States ambassador as someone who was installed "to organize an overthrow in Russia." Putin has long claimed that the United States is funding and supporting the Moscow protests -- as if Russia's problems, like corruption or the outdated industrial sector, were not homemade. "We have to stop looking for someone else to blame," says Prokhorov.

It looks as though the oligarch were filling the void that was left when current President Dmitry Medvedev lost his status as the liberal great white hope.

He presents his ideas coolly and precisely, speaking in the tone of a businessman. Only once does he become passionate, when a young man asks him how he intends to overcome corruption. "By separating politics and business," he replies. "Government employees and police officers must not abuse their positions to enrich themselves. I will fight for this until the bitter end."

The presidential candidate has said privately that his goal is to capture at least 10 percent of the vote. But so far his poll numbers have hovered in the low single digits. Prokhorov's campaign is the campaign of a hybrid. He is part of the system, because he can only run with the Kremlin's blessing, says Mark Feigin, a political consultant in Moscow. "But he also represents the oligarchs who want to get rid of Putin."

And there are quite a few of them by now. They are hoping for a new wave of privatizations, and they are eager to gain more influence once again, the kind of influence they had in the 1990s. They are also tired of Putin using them as sponsors: here a billion to develop Sochi into an Olympic city, and there millions of dollars to host a G-8 summit. Some of them now financially support the new opposition. Others, like finance and media mogul Alexander Lebedev, are marching alongside the Moscow protesters.

The government party, United Russia, exacerbated this loss of confidence when President Dmitry Medvedev and Prime Minister Putin simply declared in September that they would be trading places.

"It was cynical, and it really upset people," he explains. "The creative class said to itself: Wait a minute, we pay taxes and we deserve respect. People are no longer keeping silent when decisions are made above their heads."

Prokhorov decided to go into politics the first time last summer, after being persuaded by family members and associates of Putin's predecessor, Boris Yeltsin. Putin and Medvedev allowed him to lead the economically liberal party "Just Cause." Putin may have been hoping that he would fail, and thereby demonstrate yet again that liberal ideas are not capable of attracting a majority of Russia's 142 million people.

But when Prokhorov suddenly became more independent than expected and also starting bringing nationalists into the party, the Kremlin promptly pressured him into quitting. Without the oligarch's financial backing, "Just Cause" won only a paltry 0.6 percent of votes in December's parliamentary election. Remarking on his first political experiment, Prokhorov says that he learned from his mistakes and has been gearing up for the next effort since then.

He ends the campaign event in Kazan with a basketball game, for which he has had US basketball legend Robert Horry flown out to Russia. Prokhorov and a few other celebrities also join in.

Prokhorov's team is wearing black jerseys. The opposing team, led by Deputy Prime Minister Dmitry Rogozin, is wearing orange. After two minutes Rogozin, a former NATO ambassador, is exhausted and shuffles sheepishly off the court. Prokhorov, looking relaxed and agile, gets ready to shoot a basket.

In the end, Prokhorov's team wins by 31 to 30 -- his first triumph over the current administration, but perhaps also his last.