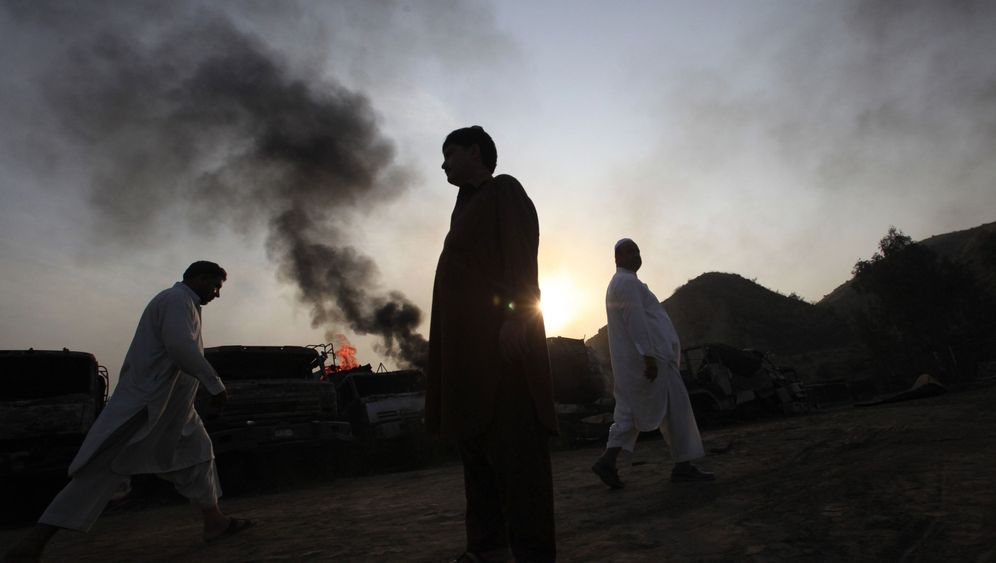 In Afghanistan cars are cheaper. Rafiullah knows this all too well. He grew up in Jalalabad, in eastern Afghanistan, a place where you can pick up almost any new model cheaply. The cars are stolen from around the world and then smuggled into the country. Rafiullah needs a car, here in Kohistan, in northern Pakistan where he has been living for a few months.

Rafiullah, 25, is an insurgent, or as he puts it, a "holy warrior." Hundreds, probably thousands of them have retreated to the mountainous regions of northern Pakistan to recover from their battles against NATO troops. Pakistan remains relatively safe, NATO soldiers are far away and the insurgents' only adversary here is the Pakistani army -- and "sometimes they are quite nice," says Rafiullah. He considers Kohistan particularly safe "because here, in contrast to regions directly on the Afghan border, there are no US drones."

Every couple of weeks he travels to Afghanistan to visit friends and relatives and meet up with fellow fighters, Rafiullah says. The border has long been the site of regular crossings. "Now many people are travelling to Afghanistan because they hope that the Western troops will soon pull out of our country and a new future will start." He will also return permanently to Afghanistan "when I get called," he said. "Now I need to go there to pick up a car." For the time being he prefers to live in Pakistan.

Insurgents like Rafiullah are currently much in demand. The Afghan government wants to reintegrate them into society and the West wants to talk to them. It is a strange situation, though. On the one hand, the fighting continues. On the other, Pakistan's government and military regularly deny that the region where Rafiullah lives is a safe haven for jihadists from Afghanistan.

Above all, the Pakistan-Afghanistan border needs more controls, say high-ranking US officials. Even at official border crossings, controls are insufficient, not to mention in the surrounding mountains, where they are virtually impossible.

Al-Qaida leader Osama bin Laden is also thought to be in this region, as is his deputy Ayman al-Zawahiri. At the beginning of the week, the US news channel CNN cited an unnamed NATO source as saying that the world's most wanted man was hiding out in the Chitral District, some 150 kilometers (93 miles) northwest of Kohistan. Bin Laden doesn't live in a cave, the source said, but in comfortable houses. In June, a 52-year-old Californian was arrested in Chitral with a night-vision device, pistols and a meter-long sword. His aim was to kill bin Laden and collect the reward on offer of more than $50 million (€36 million).

Kohistan is seen as another place where the terrorist leader may be hiding. The region is known as a place where extremists come to rest. Fighters from other Pakistani regions and from Afghanistan spend time here. It is a welcoming place -- those arriving in search of a bed, a meal or a tea are quickly provided for. But it is also very conservative. The provincial capital of Peshawar, with its many women in burqas, looks progressive by comparison. Women are rarely to be seen in public in Kohistan. Those few who are out and about turn away quickly even if completely veiled.

Rafiullah laughs it off: "That is how our Pashtun culture is," he says. His black beard reaches down to his chest and he wears a bright white shalwar kameez -- a suit including a shirt which reaches to the knees and a pair of cotton trousers -- along with a dark turban. He finds it amusing that his guest finds the absence of women on the street strange. "But I can understand that one finds that odd when one comes from Islamabad or New York," he says. He mentions Islamabad and New York as if they were comparable cities.

'What Exactly Is the Taliban?'

Kohistan could be a holiday paradise. Mountain vistas abound, slopes are covered in thick forest and green terraces where farmers toil. Children bathe in a small river which meanders through the valley. This year's flood, which arrived following the heaviest monsoon rains in decades, transformed the river into a raging mass of water which burst its banks, destroying houses, cars, trees and electrical generators on both sides.

The region belongs to the Khyber Pakhtunkhwa province. From the capital Islamabad it takes about nine hours to reach Kohistan by car along often bumpy roads. In some places, the flood swept away entire villages. Here and there, the remains of a home stands teetering on the edge of freshly-carved banks, in danger of collapsing. People live in them anyway. Far above, away from the water, small houses nestle against the massive mountains as do, every kilometer or so, nicer villas.

One recent October morning Rafiullah climbed into an old Toyota Hi-Lux, the sort of car that the Taliban used to conquer Afghanistan. He intends to travel to the border and then on into Afghanistan to smuggle a car from Jalalabad back to Kohistan. Is he part of the Taliban? "What exactly is the Taliban?" he counters. "The Taliban are students, people seeking insights. In that sense I am one." He thinks about it and then continues, "besides there isn't such a thing as the Taliban, neither in Afghanistan nor Pakistan." And in reality, hardly anyone calls themselves Taliban here. But if one is looking for fighters in northern Pakistan, the people in the towns and cities will tell you exactly who is linked to "them" and where they can be found.

A man who also wears a black beard, white clothes and a dark turban, steers the pick-up truck through dusty mountain roads towards the Karakorum Highway. The most direct route through the Swat Valley is still impassable after the floods washed away a bridge. Rafiullah and his driver take a different route before driving to the Khyber Pass via Peshawar. Rafiullah is silent as the car rolls along. He looks out the window, once in a while he pushes a few buttons on his mobile phone or dozes off. It takes amost 10 hours to reach their destination: Torkham, the border crossing between Pakistan and Afghanistan.

Several trucks stand at the crossing -- every day some 200 or 300 trucks carrying NATO supplies pass through. Supplies for Western troops arrive by ship in Karachi and then are moved overland to Afghanistan, much of it via Torkham. Not long ago, the Pakistani government halted the passage of provisions for 11 days in response to US helicopters shooting and killing Pakistani soldiers on the border.

Extremists, too, sought revenge and attacked a number of convoys, torching around 100 vehicles. The government only allowed the convoys to travel again once the US Embassy in Islamabad had spoken of "a dreadful accident" and issued an official apology.

Rafiullah and his driver maneuver past the trucks. It is a bizarre image: In one lane, NATO provisions stand waiting to cross into Afghanistan, in the next sits Rafiullah, an insurgent who fights the very soldiers who are destined to receive the supplies. On the iron border gate hangs a sign, written in English and Pashtu which reads "May freedom prevail on earth."

Smugglers Have it Easy

The driver comes to a halt a few hundred meters from the border. Rafiullah wants to cross the border on foot. On the other side, a friend is waiting for him to take him on to Jalalabad. Rafiullah is an Afghan citizen but, given that he doesn't have a visa for Pakistan, he tends to travel without any documents at all. "That's no problem," he says, grinning. He rubs his forefinger and thumb together and says, "you just need to give the guards a little something. And be a Pashtun."

Officially, Pakistani border guards earn between 6,000 and 8,000 rupees a month, between €50 and €67. Even here, that's not much. "I always give them 500 rupees, some truck drivers have to pay more than 2,000 rupees," Rafiullah says. "They don't usually ask for passports, at least not when you look like a Pashtun and speak Pashtu."

Children are pushing handcarts laden with bags and suitcases from one side of the border to the other. While the line of trucks creeps slowly forward, people on foot cross the border quickly and, in most cases, border officials hardly look at them. No one wants to see documents. Smugglers and fighters have it easy here.

Those from the eastern province of Punjab, however, are subjected to thorough searches, says Rafiullah. "The military and the secret service are full of Punjabis and we Pashtuns don't like that." The Pashtuns do not like to share the almost 2,500 kilometer long border between Afghanistan and Pakistan, called the Durand line after the foreign minister of British India, Sir Henry Mortimer Durand. Most of them, almost 30 million, live on the Pakistani side. Only half as many live in Afghanistan, where they make up the largest segment of the population. "This border was created by foreigners and we don't accept it," says Rafiullah. And that is also how the guards working here operate; with the border as an artificial division -- and an opportunity to earn a bit of extra income. "We don't need to climb over any steep mountains to travel between Afghanistan and Pakistan," Rafiullah says.

The young insurgent says goodbye. All he is carrying is a plastic bag containing clean clothes for the next two to three days. Then he will be back, in Torkham, driving across the border in his own car, which he will take back to Kohistan. He waves and greets the border guard with a pat on the shoulder and a handshake. The handshake lasts a while, long enough for the banknote to change owners. It is enough to ensure that no papers are asked for.

Rafiullah doesn't look back. He disappears into Afghanistan.