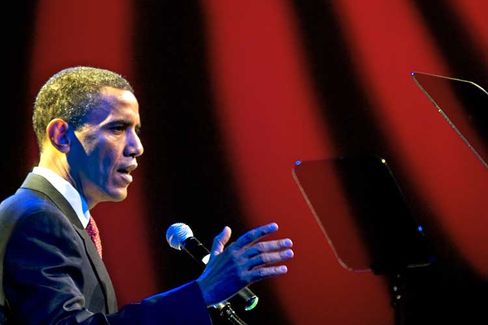 Presidential candidate Barack Obama delivers a policy speech on "Changing the odds for Urban America" at a community center in Washington, DC.

Let's start with the ending: Barack Obama has just finished giving a stump speech to around 200 residents of Washington, D.C.'s impoverished Anacostia neighborhood. Wednesday's speech covered basic principles and dealt with poverty and wealth. Obama has said just about everything a candidate who wants to win the poor vote needs to say, delivering each speech with a healthy serving of what campaign managers call "soul food."

But the applause at the end is miserable. It begins in the first row, where the local dignitaries are sitting. It drags itself over to rows four and five, where a huddle of apathetic young people are lolling around. It struggles to reach row 14 at the back of the room. The man at the podium, who was earlier hailed as the "next president of the United States of America," is surrounded by silence as he departs. The applause doesn't even carry as far as backstage. His shoes make a clicking sound on the wooden floor.

The crowd gathered in the small lecture hall of the Town Hall Education Art and Recreation Center, less than 10 miles from the White House, was not merciless in its reaction, justhonest. The senator from Illinois is recognizably not the product which he is being sold as. At the beginning he was described as a rising African-American star. That was back when people were still being modest. Then the political marketing people reached up onto the top shelf, and started referring to him as the new Kennedy, the new Martin Luther King Jr., the first black president.

In the big halls, his campaign staff have been doing a lot since then in order to justify the labels. They write snappy speeches for their protégé. They bring along placards. They try to seed waves of applause from within the crowd. Anyone who buys an Obama t-shirt, baseball cap or sticker on the Internet is registered as a donor. A "grassroots revolution" is under way, or so it is whispered.

On television, the "Obama for President" show works seamlessly. His long arms are made for hugging people and shaking hands, and his face can produce radiance at the push of a button. Both together make him look so charismatic in a short news report that the Kennedy comparison appears at least permissible.

Overburdened with expectations, Obama stands there and talks woodenly. His arms hang lifelessly by his sides for minutes on end. In the strict sense of the word, he isnt actually giving a speech but just reading out a text word for word, giving his intended pathos an artificial sheen. He frequently starts sentences by saying, "When I become president."

The young senator would prefer not to answer questions. That's what his Web site is for. He spells out the Web address.

Obama's voice is manly and firm, and often too loud. He obviously wants to exude an aura of leadership, which is why he raises the decibel level so high.

The substance of what he is saying is not particularly provocative for the audience in the community center, but it is very appealing. On this early morning in the US election campaign, Obama is the candidate of comfort. He says a lot of things which are correct. It's difficult to stop nodding in approval.

A child's future should not be decided before the child has even taken its first steps. Certainly. No one can learn properly if schools don't offer "the right books or the best teachers." Bravo. It is no wonder unemployed youths join gangs if there are no jobs for them and "the most successful businessman in your neighborhood is a drug dealer." Someone in the hall yells "Yeah!"

And Obama does exactly what populists like to do most: He compares apples and oranges. A kids project in Harlem that he would like to see extended across America costs $46 million a year -- the kind of money that is spent in just one morning in the Iraq war, he says. Let's invest this money better, he calls out to the audience. The applause speaks for the effectiveness of these kinds of comparisons. But it also speaks against the candidate.

Buying toys instead of weapons is the surest way for America to lose its status as a superpower. The conflict with an aggressive Islam could not be won in this way. Naturally Obama knows this -- that's why in an article for Foreign Affairs he writes that in his opinion the US military urgently needs to be "revitalized." That means more money, more soldiers and more ground forces -- he suggests an increase of around 100,000 men and women. "A strong military is, more than anything, necessary to sustain peace," he writes.

Finding the Comfort Zone in Every Audience

The candidate proceeds on the basis that no one in the audience is capable of mental arithmetic. After all, if his speech became government policy tomorrow, then the new president would have to head straight to the International Monetary Fund the next day to ask for a loan.

Obama is demanding what the Republicans call "big government," a free-spending state. He promises to bring in socialized medicine without mentioning how he will finance it. He wants to found an American bank for the poor based on the concept of the World Bank, he wants to give money to after-school centers and transform the minimum wage into a real living wage, which would automatically increase with any rise in inflation.

Italy had this "mobile scale" for decades. It proved to be a unique program for devaluing the currency, which is why the Italian politicians were so unsentimental in ditching the lira for the euro.

Barack Obama is a candidate who knows and addresses the comfort zones of any audience. He talks of leadership but it reeks of following. He wants to be modern but a lot of what he says sounds highly antiquated. His selling points in Washington's southeast stem exclusively from the sunken treasure of old school liberals.

Anyone with any sense already knows who will end up paying for these choices -- the middle class. That's why Obama's program is not just expensive but also foolish. The underclass in America is massive -- 40 million people live below the poverty line. But it is not big enough to provide the base for an election victory. And people in Harlem, Brooklyn and even in a New Orleans devastated by Hurricane Katrina are not in a revolutionary mood. The poor are less likely than average to vote, and it cannot automatically be assumed that the poor will vote for the left. Indeed, many live on the left but vote for the right.

It was for this reason that Bill Clinton when he was campaigning was so clever in appealing to the "forgotten middle classes." And the German version, namely Gerhard Schröder's campaign appeal to the "new middle" in 1998 was also a big success. Barack Obama, however, is fishing in a much smaller pond.

But should campaign speeches be taken so seriously? Probably not, say those involved. Former US President Franklin D. Roosevelt, a great war president and a passionate campaigner, felt it unreasonable to keep him to his loud-mouthed campaign promises: He told critics that campaign speeches were merely placards, not engravings.