The memorial service high above the Bosporus went far beyond what is usual at the funeral of terror suspects. Several thousand people turned up at the mosque, built by Sultan Mehmet, the conqueror of Constantinople, to mourn the deaths of three Chechens. A man wielding a pistol had shot the men from Russia's rebellious northern Caucasus region on Sept. 16 as they left a house in the European part of Istanbul.

The killer fled in a black rental car. Last week, he managed to evade Turkish investigators who had tracked him down to his hotel, but he was in such a hurry that he left behind his pistol, a night-vision device and passports. The Turks are now looking for a 55-year-old Russian who entered Turkey in early September under the name Alexander Shirkov.

So far, the government in Ankara has not commented on the murders. It is reluctant to jeopardize relations with its old geopolitical rival Russia, which had finally been improving recently. However, representatives of Islamist organizations sharply criticized what they called Moscow's "insidious state-sponsored terrorism" after the funeral service.

'We'll Kill Them in the Outhouse'

The bloody deed is a sign of a larger conflict: the struggle between Russian Prime Minister Vladimir Putin and those in the Islamic world who sympathize with the radical Chechen underground fighters, provide them funding and grant them refuge. Putin is determined to prevent the region from breaking away from Russia at all costs.

Russian intelligence agents appear to be systematically working off a hit list. When he came into power, Putin, who was president at the time, apparently decided to expand the death zone. "We will pursue the terrorists wherever they go. If we find them in the toilet, we'll kill them in the outhouse," the president vowed, and set his agents loose on Chechen rebels and terrorists abroad.

In February 2004, Russian agents with diplomatic passports blew up an SUV carrying Zelimkhan Yandarbiyev, a Chechen rebel commander, in Qatar, where he had been a guest of that country's emir. Interpol was searching for him, and his name was on a United Nations list of known terrorists, but Qatar refused to extradite Yandarbiyev to Moscow.

When the murderers, officially members of the Russian diplomatic corps, were captured and arrested, Putin himself reached for the phone to secure their release in Qatar. In 2006, Putin got a law passed that legalized his approach, just as his counterpart, then-US President George W. Bush, had done a few years earlier. Now, Russian intelligence agencies and special forces are permitted to kill terrorists abroad. The order to liquidate suspects has to be issued by the president.

The attacks were carried out in Arab countries, Azerbaidjan in the southern Caucasus and, in particular, Turkey. In September 2008, the Chechen militant Gaji Edilsultanov was murdered in Istanbul in broad daylight. Three months later, his fellow militant Islam Zhanibekov was killed in an execution-style shooting in front of his wife and children. Russian special-forces units had targeted the Chechen because of his involvement in several terrorist attacks.

Musa Atayev, a Chechen field commander who was in Turkey under a false name, was killed in Istanbul in February 2009. Neighbors found him lying dead in a pool of blood. Atayev was believed to be the Istanbul representative of terrorist leader Doku Umarov, who has claimed responsibility for numerous attacks, including the bombing of the Moscow Metro in March 2010, which killed 40 people, and the attack on the city's Domodedovo International Airport in January 2011. The airport bombing claimed 37 lives. Because of his involvement in these attacks, Umarov is often referred to as the "bin Laden of the Caucasus."

According to Turkish police, Alexander Shirkov, who is now suspected of having organized and committed the recent triple murder, was in Istanbul when Atayev died in February 2009.

Late last week, there was speculation on Chechen underground websites, as well as in the Russian and Turkish media, that a so-called "Berlin group" may have been involved in the killings. Russian undercover operations have allegedly been directed from the German capital, of all places.

Officially, German authorities have no solid evidence that this is the case. However, they did not fail to notice that more than 1,200 Chechen exiles and Russian intelligence agents are now stalking each other in Berlin. The Germans have also noticed that Umarov's following is growing. They report dubious flows of cash -- including from young men who are leaving Germany to join the holy war in the Caucasus. 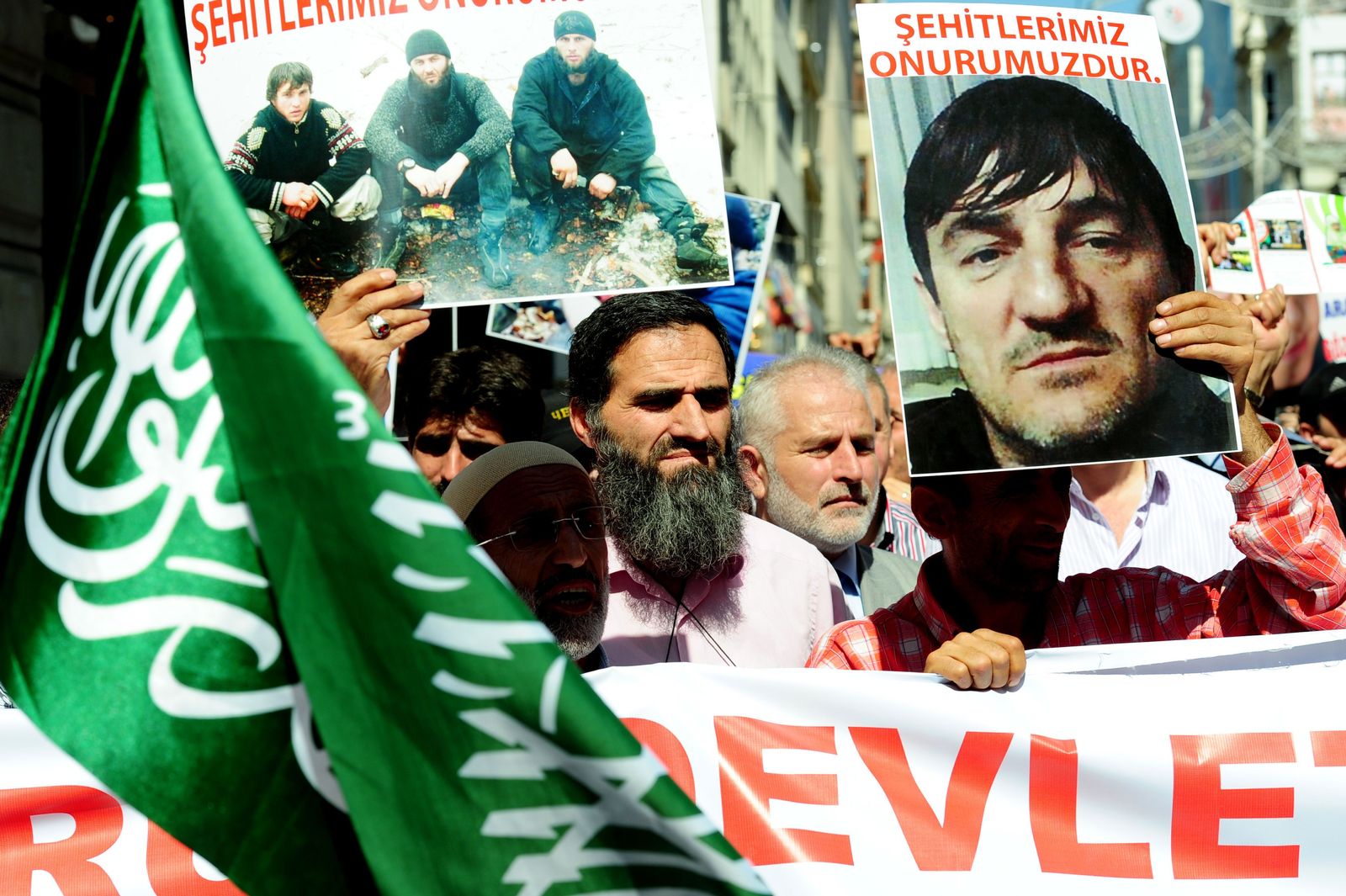 Chechen exiles demonstrate near the Russian consulate in Istanbul on Sept. 24, following the recent murder of three Chechen terror suspects in the city.