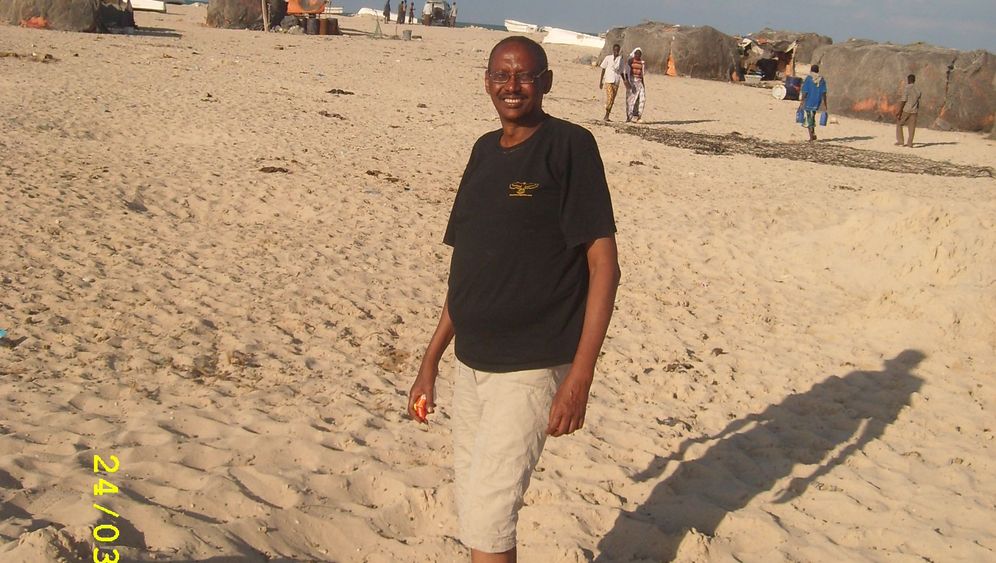 Photo Gallery: Can Somalia Save Itself?

Mohamed Sahal Gerlach, like about one-fifth of all Somalis, lives abroad. He's a Deputy Minister of Trade for Somalia's Transitional Federal Government, but he serves from a distance, without a salary. In fact, he has lived in Berlin since the 1970s.

"That was my best time," he says of Somalia's heady postcolonial days, when he was a student at Berlin's Free University. "We'd party all night and then come to class, and you know ...," he jokingly imitates falling asleep. "But I regret nothing."

He's a tall man with a white-flecked mustache and a pot belly, an earnest and sometimes angry expression, but a tendency to be frank and direct. He wears khaki slacks and a blazer without a tie. He'd like to help his nation, and he has a business plan to build up central Somalia so people would no longer go hungry.

"There is no reason for people to starve in my country," he says, sitting in a gloomy African-expat café one late-summer day in Berlin. "It should be illegal."

Sahal's ancestral home is the Galmudug region of central Somalia, between Puntland to the north and the Islamist-dominated regions around Mogadishu to the south. "It is the narrowest part of Somalia," he says. "One clan controls most of it, from east to west. It is relatively stable. And if we could build a small harbor complex, just a pier where ships and dhows could bring goods to the beach -- we could connect Ethiopia to the ocean. It would have a number of good effects."

There must be dozens of Somalis around the world with similar dreams. The idea itself is heartbreakingly simple, but the obstacles are a thumbnail of the Somali tragedy.

Sahal has brought his idea to a member of the German parliament. He wants German construction aid -- not cash, but help from German companies with the expertise and machines to build a pier. Frank Heinrich, a lawmaker with Chancellor Angela Merkel's Christian Democrats, who works on the committee for human rights and humanitarian aid, has asked for more detailed information from Sahal.

"It's on my radar screen," he says, "and I'm still talking to my colleagues about what we can do about the catastrophe in Somalia. But at the moment," with Sahal's idea, "I have more questions than answers."

The coast of Galmudug is mostly beach, with no natural harbors. Sahal has a vision of piers every hundred kilometers along the quieter coast north of Hobyo, where ships would land with fruit, vegetables, meat and fish. He imagines exporters setting up shop in new coastal towns; he sees jobs for truck drivers, cargo porters, mechanics, builders and restaurant workers.

"If we built small ship-landing facilities, then people will build roads and new towns. There would be jobs," he says. "Anyone who wanted to do business there could make a profit with a very simple investment. And, in the long-term, Ethiopian gas pipelines could come in this direction." Landlocked Ethiopia also plans to drill for oil and natural gas in the Ogaden, near the western Somali border, and Sahal wants to offer them a path to the shore.

"From the coast to Ethiopia, this area is controlled by just one clan, the Sa'ad. Without us, there is no Somalia," he says. "Anyone who wants to move between northern and southern Somalia has to deal with us."

Sahal raises his eyebrows. He says it would cost only half a million to €1 million for one of these piers, not billions like is spent on the international naval forces that patrol the waters off Somalia's coast. "The people would rise up and drive out the pirates," he asserts. "All they need is an honest way to make a living."

Ethiopians and Somalis have been known to wage war, and the border with central Somalia is disputed; but Sahal says his clan can maintain peace. "We have nothing against Ethiopia," he says. The other obstacles to the plan are obvious -- civil war, Islamist gunmen, and pirates, who have major nests in uncontrolled corners of Galmudug.

Unlikely as they may sound in Berlin, ideas like Sahal's are what Somalia will need to rebuild itself. Modest infrastructure and clan stability have put other parts of the fractured country in a position to grow. The northwestern region (and self-declared mini-state) of Somaliland is a typical example. "I want this to be like Somaliland," Sahal says.

Stig Jarle Hansen, a Horn of Africa scholar at the Norwegian University of Life Sciences and piracy expert, agrees that northern Galmudug is relatively stable, and that the Sa'ad clan controls a lot of territory across central Somalia to Ethiopia.

Ethiopia has also been searching for another transit path to the coast. Its main port is Djibouti, the capital of a neighboring country, inconveniently located at the maritime gateway to "pirate alley" in the Gulf of Aden. Kenya has even announced a massively expensive proposal to turn the sleepy resort of Lamu, near the Somali border, into a deep-water harbor with full rail and road links to Ethiopia and South Sudan. But experts question whether the plan is practical.

Analysts at the International Crisis Group office in Nairobi point out that businessmen already use Somalia for transit to neighboring nations -- often for black-market goods. "Because Somalia doesn't have a central government, people believe it's kind of like 'Mad Max'," says E.J. Hogendoorn, who directs the Horn of Africa section at the International Crisis Group. "The reality is that for the locals, it's much more understandable. If you know people, and you use your clan and business connections, you can move goods across the country with relative ease."

The problem, as ever, is violence. No single force in Somalia can guarantee security for a construction project. Sahal says his clan will guarantee it for northern Galmudug, but Frank Heinrich in the German parliament is still uncertain. The idea is "a vision, it's a concept, and I'd be happy to pursue it," he says. "But I need more meat on the ribs, so to speak."

Heinrich is not sure a pier would instantly bring in commerce. He's worried about security in the ocean for any ships landing at a Somali beach. And he worries about control of the pier itself. "Who knows if pirates would take it over?" says Heinrich.

Hansen of Norway says a pier on the beach would probably not be useful for the pirates themselves, because pirates like to keep hijacked ships floating well offshore. But, he says, pirate financiers also deal in smuggled weapons and human trafficking, so the piers "might be beneficial to pirate types of smugglers."

Which raises a provocative question. Does Somalia need foreign aid at all? Immediate famine relief is urgently needed because many people at the moment are dying of hunger. But to rebuild Somalia? Millions of dollars pour into pirate hands every time a shipping firm ransoms a freighter. Some pirate master might have a grand opportunity to launder his image by trying to finance and organize, say, piers and roads.

Sahal nods at the idea. It's occurred to him before.

"That's not impossible. But the pirates are afraid," he says. "They don't want to put their money on (formal) display. It's stolen money!" Right now it seems to vanish into civil war, fancy cars, and khat, the stimulant leaf that people chew compulsively up and down the Horn of Africa.

"And we would still need the construction aid." Sahal shrugs. "If pirates build, they build outside Somalia. They are afraid. Because in Somalia, the security situation is so bad."

Zurück zum Artikel
7 Bilder Photo Gallery: Can Somalia Save Itself?